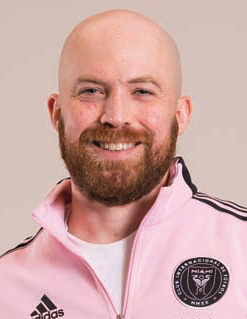 A marine and a trapeze artist.

Waiting for a punchline? There is none. Just part of the resume of Harley Rockhill III.

The central theme of Rockhill’s career to date is the business of fun.

“I love the entertainment, hospitality and sports industries, and can’t imagine having a career in any other field,” says the Princeton, New Jersey native.

“The department that my team and I are building is focused on helping the club manage the data from multiple systems and workstreams,” he says.

He also attends Florida International University working on a doctorate.

Back to the marine and the trapeze.

After four years in the Marine Corps, Rockhill enrolled at Florida State University, one of two colleges in the U.S. with a circus curriculum. On a dare from his friends, he said he can perform on the trapeze. He auditioned. A year and 100 performances later he received an offer to instruct others on the trapeze in Club Med in Thailand.

“If my father hadn’t had a stroke, I probably wouldn’t have left,” he says.

After his father’s stroke, Rockhill returned to school for his MBA in management and operations at Florida State, where he also earned his B.S. As graduation approached, a friend suggested relocating to Las Vegas. He first job was with Trapeze Las Vegas, where he taught trapeze. The job paid most of the bills while he cold-called casino executives.

“I was interested in revenue management,” Rockhill says. He received a call from Caesars Vice President of Revenue Management James Larsen, now his most valuable and closest mentor. He hired Rockhill as a junior revenue manager.

By the time Covid-19 took hold in the U.S., Rockhill was working with BSE Global and the Brooklyn Nets.

“I count myself as incredibly fortunate throughout this pandemic,” he says. “I was able to keep my position when most sports teams were furloughing or reducing staff.”

It wasn’t Covid that took him away from the Nets. It was the thought of another winter in the Northeast. “I’m not great with weather below 70 degrees. I’ll take 85 degrees and 90 percent humidity over trudging through the snow in New York City.”

“I had the chance to work with most departments to develop and implement strategies for all the property’s non-hotel assets—pool cabanas, valet and self-park, entertainment ticketing, nightlife/day life cover and cabanas,” he explains.

But the man on the flying trapeze was on the move again. He and his fiancée moved to Miami, where he would pursue a doctorate while working for Inter Miami FC.

“I think (the doctorate) will allow me to be in an even better position to help guide a major league sports franchise, casino portfolio, or sports betting company with more profitable revenue management and partnership acquisition strategies,” he says.

Rockhill credits his mentors with telling him what he needed to hear even if it wasn’t what he wanted to hear at the time. “But a lesson I would have liked to have learned a bit earlier would have been, be the last one to give your opinion, not the first,” he says. “You don’t have to make sure everyone knows you thought of something… first. Instead, listen to everyone before passing final judgment.”

Meanwhile, Rockhill and his fiancée have a wedding to plan this fall. Add to that the MLS season is starting up. Still, once a week, the couple have a date night.

But if he wants to really decompress, Rockhill finds a trapeze.