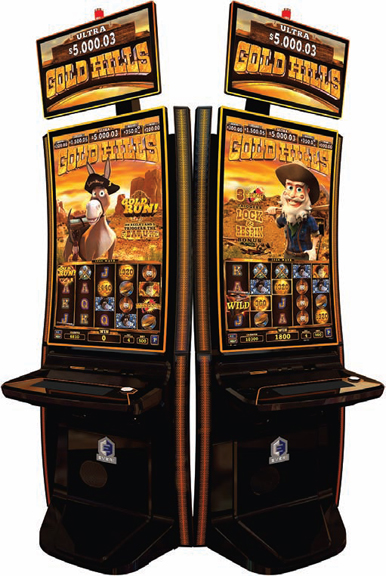 The base game is a five-reel, 1,024-ways-to-win video slot (scatter format on a four-row array). There are two bonus events. The main event is the “Lock and Respins” hold-and-re-spin feature. Three Bonus Dynamite symbols trigger five free spins. Cash-on-reels symbols lock in place for re-spins. If a gold nugget lands on a re-spin, an additional spin is awarded.

In addition to cash-on-reels symbols, icons can appear corresponding to one of five jackpots—static awards of $100 (Mini) and $300 (Minor); and progressives resetting at $350 (Major), $1,500 (Grand) and $5,000 (Ultra). During feature spins, a “Wild Plunger” on the fifth reel awards adjacent-reel Gold Nugget prizes. The fifth reel also can display a 2X or 3X multiplier, which is applied to all non-progressive bonus awards.

There also is a unique timed bonus called “Gold Run.” Credit awards appear over all five reels. A timer sets at 2 minutes, and the player spins—a gold cart on any reel awards the credit amount displayed over the reel. The player continues to spin and collect awards until the timer runs out.