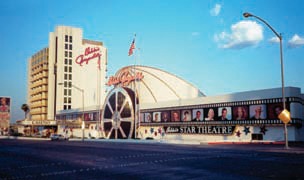 The Clarion Hotel Casino in Las Vegas, once owned by entertainer and film star Debbie Reynolds, closed on Labor Day.

The Clarion has seen many changes in fortune, name and ownership. It opened as the Royal Inn in 1970 and was originally owned by the Royal Inns resort company. In 1972 it was acquired by Michael Gaughan and his business partner Frank Toti, who later sold the property to Horn & Hardart. In 1980, it became the Royal Americana. But it closed in 1982.

The hotel eventually reopened as the Paddlewheel, which also didn’t last. Reynolds bought it in 1992 and renamed it the Debbie Reynolds Hollywood Hotel, where she showcased her extensive collection of movie memorabilia.

But Reynolds’ own financial problems caused gaming regulators to deny her a casino license. Reynolds filed for bankruptcy in 1997 and sold the property to the World Wrestling Federation, which hoped to rebrand it as a wrestling venue. When that didn’t work out, the hotel was sold again and renamed the Greek Isles.

In 2009, the hotel went into foreclosure in and then was picked up by creditors who partnered with the Clarion hotel chain.