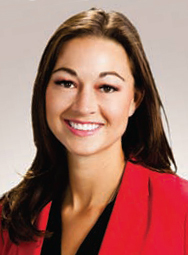 Though born in Arizona, Danielle Rankin grew up in Ocean Pines, Maryland, just outside Ocean City. She played soccer for Stephen Decatur High School, where her coach, Amy Fenzel-Mergott, proved to be a pivotal person in Rankin’s life, one of the first strong female figures she looked up to.

“She taught me that you only set your own limits and all of them can be broken, and always pushed us to be better and lead by example,” Rankin says. “We used to run sprints on the track. The entire group had to finish under the time limit or the team ran again. You were only as good as your weakest link and you needed to work together.”

Those lessons followed Rankin to the University of Arizona, where she obtained a B.S. degree in 2006 in retail and consumer sciences. MGM Resorts recruited her for its Management Associate Program, where she assisted with the retail and merchandising division.

Less than two years later, Rankin gained an appreciation for gaming as a career and left a position as merchandise planner with MGM Resorts to become a casino marketing analyst at Mandalay Bay. It was here she met Josh Swissman.

“He was the first person in the gaming industry that took a chance on me,” Rankin says. “Throughout my career he has been the single most influential person. He invested his own time and effort in my learning and growth.”

Each member of the Swissman team met with Rankin weekly for updates.

“Yet he insisted we come prepared with questions whether they related to work or personal. I learned casino analytics, staffing, yielding and so much more working alongside Josh,” she says.

“I am passionate and driven in all that I do. I am fortunate that others have recognized my dedication and provided opportunity for growth,” she says.

But the pathways have not always been smooth. During Rankin’s transition from retail to gaming, the economic downturn of 2008 impacted Las Vegas with layoffs. “But I kept my job.”

Her team had to absorb different roles, focusing on revenue and profits.

“There were long hours, trials and tribulations, but all in all it was worth it,” says Rankin, who relaxes by running, biking, going to the beach, and enjoying time with pug Lucy.

In the transition from MGM Resorts to Konami, Rankin went from a position with established connections to one where she knew no one in the company.

“It was a challenge to sit back and observe,” she says. “I had to gain the team’s respect, learn new processes and new products. I realized I only knew a small piece of the gaming puzzle. At Konami, I have gained such a broad spectrum of gaming and all its intricacies over the past eight years. I am so glad I made that leap of faith.“

Today, Rankin oversees the strategic positioning of Konami’s casino management system Synkros, within new and existing markets. “I assess development strategies for establishing partnerships with other companies for specific products, alliances or joint venture opportunities. In addition, I act as an internal champion for customers.”

Rankin sees her future as part of the rapidly evolving technology in the world of gaming.

“I want to be part of the transformation on how customers engage with technology,” she says. “In the same regard, I want to empower the operators with tools, enabling them to be successful in a new landscape, whether that’s physical, online or any other platform.”

She has simple advice to those who follow in her footsteps in the transformative world: “Be flexible and nimble, absorb like a sponge and learn. Listen more and speak with thoughtfulness.”