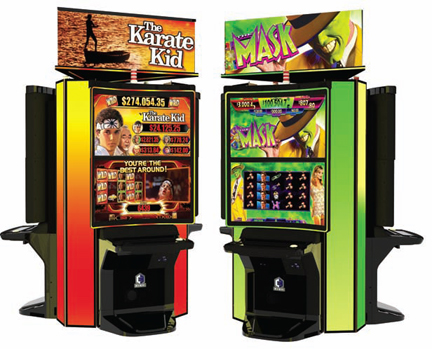 Everi is marketing two licensed games together in its Premium Series, both on the Empire DCX premium video cabinet. Dedicated sign and lighting packages with flexible configurations are available that can include overhead LCD signs, backlit fillers and end cap wedges in three-pod and back-to-back configurations.

The Karate Kid features the theme of the 1984 film starring Ralph Macchio and Pat Morita as a bullied kid and his karate mentor. The Mask features Jim Carrey’s 1994 comedy about a mask that transforms its wearer into a hip superhero or super villain, depending on the wearer. Both themes are woven into line video slots, The Karate Kid a 30-line game on a three-by-five array; The Mask 40 lines on a four-by-five array.

Each game has unique bonus features woven around its film. The Karate Kid features “The Karate Tournament” free spins, with a bonus wheel that spins to lock in a progressive jackpot tier. Also featured is the Wild Strike Bonus, in which the reels split into up to six separate arrays, adding wild reels and giving more chances to win progressive jackpots.

The Mask also features a free-games bonus with a jackpot wheel spin. There are six different progressives that can be won, the top resetting at $100,000; and a pick bonus with a prize ladder that tops out at 80,000 credits.