Young would-be gamblers want a product that looks, feels and sounds like the arcade games they grew up with—Synergy Blue is working to fill the bill, and then some. 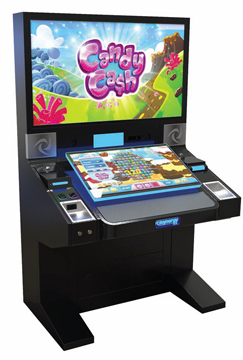 For a look at the future of skill-based casino games, talk to Georg

The California-based provider of skill-based games, platforms and applications, which recently relocated to Las Vegas, undertook a study to learn what operators will be looking for over the next few, literally game-changing years. Based on a survey of executives from more than 100 casinos, “The State of Skill-Based Games in a New Era of Gambling” shows that, despite lingering resistance to shaking up the slot floor, more operators realize that new modes of play could unlock a new generation of patrons.

From Washington’s standpoint, re-creating an arcade-style experience with what he calls “skill-influenced” games is one way to attract younger players; in this case, familiarity breeds success.

“Someone may try a game more readily if they’re walking through a casino and think, ‘Oh, that looks like something I played on my mobile phone, on Xbox or at the arcade.’” Not to say Synergy Blue doesn’t also court the traditional player base, he adds. “We don’t want to replace slot machines. We want to provide a different flavor and feel.”

Skill games have not exactly set the world on fire—yet—and surprisingly, that’s fine by Washington.

“We have a bit of a different philosophy,” he says. “We like to take things slow, look at the games, adjust them and develop products with some depth and flexibility. We’re only coming up to that point now, where we have the depth of library, multiple math models per game, and second-generation games that have been adapted, modified and improved. While some people are still hesitant—they don’t know how these games are going to play in the casinos—the acceptance is better.”

The game lineup features lots of elements that strike a chord with younger players; there are driving games, shooting games, and even games played with joysticks. And despite the term “skill-based,” Washington says it’s easy for most people to pick up the games, from “Gen X, who play those types of (arcade) games, all the way down to millennials and people who play Candy Crush or Panda Pop. You don’t have to teach them to play the game, you just have to educate them on the mechanics.”

Importantly, games like Safari Match, Cocktail Crush, Zombies and Candy Cash “don’t really penalize somebody who comes in with very little skill, though of course, the better you play, the better the odds.”

Synergy Blue now has a presence in venues in California and central Europe, and its product line is also in the midst of trials in Nevada. Additional markets and distributors are in the offing, says Washington. “We have a huge pipeline ahead of us in the next year. We’re really excited, waiting for a time we can talk about it.”

To win over established and emerging players—all of whom are likely to also play free social games—the company is committed to providing top-of-the-line graphics, animation and sound effects, intuitive play that also poses a challenge, and an emotional (if not financial) payoff.

According to the company survey, 50 percent of casino operators said Gen Xers, who are more financially established, will be their target growth demographic over the next five years. Seventy percent said they “have, plan to, or are considering adopting skill-based games, games with skill components, or games with arcade-style play.”

“Because skill-based gaming is still in its early days, and without comprehensive analysis of metrics, it’s difficult for some to give it valuable floor space,” Washington has said. He calls the report “a first step in understanding what the forward path for adoption looks like and the learning that can be culled from early adopters.

“A landscape that’s growing more crowded all the time will continue to require casinos to provide new experiences for gamblers, and the emergence of skill-based games offers exactly that,” Washington says. “The newness of skill-based games brings exciting opportunity as well as daunting challenges.”