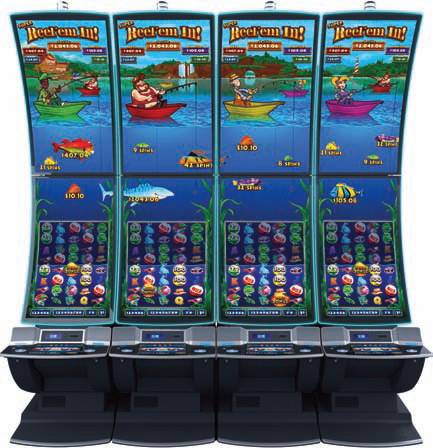 This reboot of one of the legendary titles from the original WMS Gaming reprises the comical animated fishing bonus that propelled the legacy manufacturer into the multi-line video slot genre that previously had been dominated by Aristocrat, which had yet to be licensed in Nevada at the time of its 1997 release.

Reel ‘Em In was pioneering for its time, not only for the multi-line format, but as one of the earliest games offering a second-screen bonus. It was a funny sequence in which the player’s fisherman or fisher-woman narrated, in a thick Chicago accent (WMS was headquartered in Chicago), as the line was lowered into a lake to nab bonus credits.

Here, the game is re-created on the grand new Mural cabinet, featuring dual stacked 55-inch 4K curved monitors—that’s 110 inches of game real estate, the most in the business—in a presentation that rises 11 feet.

The slot successfully recreates the old fishing bonus with modern game mechanics. When the bonus is triggered, the line drops into the lake looking not only for credit awards—top prizes are in the thousands of dollars—but a variety of free-spin awards, some featuring more than 30 spins.

The slot features three dynamic progressives, and jackpot prizes. With the fisherman’s Wild Bobbers holding all credit value prizes in the Money Stacks Free Spins or multiplier values in the Multi-Stacks Free Spins, there is a variety of prizes the player can reel in.

The Fishing Contest Free Spins is where a player chooses a character to compete with four others to see who can catch the most fish for a chance to win one, two or three fish in the Vacation Lake Bonus.

The base game is a 40-line video slot on a four-by-five reel array. There is an expanding reels feature that can double the size of the reel array, doubling the paylines and increasing pay opportunities.