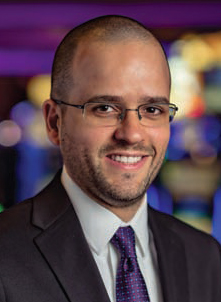 With a stacked school workload, a robust personal life, and a mundane hourly job that was merely a means to an end—the “end” being college—Allen Schultz was the typical high school senior.

He dreamed of the day that, instead of being a food runner at a casino, he would have a “real” career as a graphic designer. Then his supervisor posed a question that would change his life: “Have you ever considered a career in the gaming industry?”

And so began his career at San Manuel Casino, where he has worked for 20 years. Starting at such a young age certainly brought its challenges, not the least of which was being taken seriously by his colleagues. Maturity and personal growth took time as well, but Schultz was fortunate enough to work with patient mentors.

“I’ve had great leadership along the way, with mentors who guided me to where I am today, and my wife who kicks me into line when needed,” Schultz remarks.

Eventually, Schultz realized that his colleagues viewed him in a leadership role. That epiphany was the most meaningful of his career.

The gaming industry is rapidly changing, creating opportunities for Schultz and his team to extend their roles outside of the norm. His skill set has become well-rounded, with more diverse responsibilities in the slot realm. Ironically, being his own worst critic helped Schultz adapt his approach and grow in understanding of people, forming in him a positive leadership style with lucrative business tactics. He looks back fondly on his and his team’s ability to tackle new projects and rise to each new challenge.

As for the future, Schultz sees casino gaming lagging behind other industries in its technological advancements. Cashless gaming, mobile gaming, augmented reality and other buzzworthy technologies are in their infancy in the gaming sector, often due to the regulations required to keep players and their money safe.

This is where younger professionals in gaming play a key role, because they’re fluent in the use and language of technology, and able to adopt it more actively. Schultz firmly believes that a greater understanding of technology is critical to implementing it in professional environments.

He also sees the value in making—but not repeating—mistakes, and learning from them. He encourages the next wave of gaming professionals to take on more responsibility, even when it can be daunting.

Schultz knows how fortunate he is to be with a company that prides itself on good business decisions and great leadership. He and his staff stay energized and focused, eager to aid the up-and-coming talent at San Manuel.

His advice? “Knock one thing out at a time, and do it well. Make promises you can keep, and do new things.”