Taking a gamble on skill slots 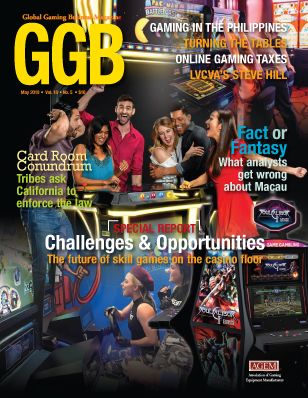 For the last few years, skill-based gaming seems to have been about the only topic anyone in the gaming industry is discussing; so-called “skill” games dominate trade show exhibition halls and bustling conference rooms. They’re the talk of industry execs eager to appease a new generation of gamers and create new streams of revenue.

But several years after their debut on the gaming scene, skill games remain an emerging and vastly misunderstood technology. Not only is there confusion about what it means to be skill-based, there are also unfair performance expectations placed on skill games that wouldn’t fly with innovative and experimental products in other industries.

For skill games to be successful moving forward, operators, manufacturers and regulators must work together to maximize the popularity and profitability potential of this new technology.

So what exactly are skill games? According to Dan Sahl of the Center for Gaming Innovation at the University of Nevada, Las Vegas, “Skill gaming refers to when a player has a certain skill or ability—whether that’s better strategy, better ability to recognize patterns, maybe faster reflexes, better hand-eye coordination—that they’re able to use in some or all of the wagers they make to improve their likelihood of winning.”

And though Sahl’s is a widely used and accepted definition among the masses, many manufacturers agree that this isn’t the most accurate way to describe their games. Most games currently on the market should be correctly categorized as hybrid games—games where skill and chance blend together.

Some games don’t fit into either category, instead falling under a third category known as interactive games.

“Interactive means the player makes choices in the game and as a result, they take responsibility for the outcomes to a certain extent,” says Eric Meyerhofer, CEO of Gamblit Gaming.

Over the years, nuances in these definitions and their albeit incorrect interchangeability have created confusion across the industry. Operators may hear the term “skill-based” and believe they can’t carry these slots because they don’t understand their rules and regulations; typically, however, if a casino accepts the GLI-11 standard—the regulatory standard that governs traditional slot machines—that casino also has the green light to offer skill slots.

Sometimes skill slot manufacturers like Synergy Blue offer two variations of their games that comply with different regulatory standards. One of those games, Candy Cash, is a traditional match three-style game. Version A, which complies with GLI-11 standard 2.0, allows players to swap and match candies, but each row of three that is matched triggers a traditional (and completely random) slot mechanic—equivalent to pulling a slot lever or pressing the “Max Bet” button on a machine.

Version B of the same game, which complies with the newer GLI-11 standard 3.0, allows players to exercise more skill in their game play. Matching three candies automatically triggers a randomly generated payout to the player, creating a hybrid skill and chance experience.

These variations create flexibility, allowing more casinos across more states to carry hybrid slot products. And flexibility is crucial for innovation in the gaming industry.

“The industry is currently wrapping up its first generation of skill-based games,” Sahl says.

Consensus among manufacturers, moving into the second generation of hybrid gaming, is about finding the right integration of gambling and skill elements without skewing the younger demographic that enjoys playing them. The first few years of this new era of gaming were about analyzing player behaviors and learning what they enjoy in their gaming experience.

Whereas gamers typically look for elements like theme, progression, completion, competition, story and narrative, gamblers look for real anticipation, winning and losing. As Graboyes says, “Because if you’re not losing sometimes, winning is just not that exciting.”

Contrary to popular opinion, hybrid gaming isn’t necessarily about creating games where the most-skilled players win the most money. Hybrid gaming is for players who aren’t interested in simply pressing a button on a traditional slot for the chance to win big. Hybrid games add a gambling component to an entertainment experience for a demographic well-versed in the world of online and mobile games—games that require exercising some skill to achieve a desirable outcome.

“Hybrid gaming is the next natural step,” says Sahl. “Looking at the last 30 years of slot design, there have been dynamic, exciting changes and developments in terms of the actual machines themselves: the screens, the use of touch screens and video screens, the additions of sounds and colors and lights.

“More important, we saw great new features that transformed the purely random win/loss dynamic of the slot: bonus rounds, crazy wilds and multipliers. Slot players loved them then and love them now. We’re at a point where it’s natural to look at games like ‘Candy Crush’ and ‘Angry Birds’ and say, ‘Can we take what makes them fun, merge them with what makes our gaming fun, and create a new playing experience that appeals not just to new players but people who currently enjoy our products?’”

Hybrid slot manufacturers fill a gap in the industry by creating a unique new gaming product where there was once none, but this innovation experiment will continue for years to come as new technologies emerge and more is learned about player preferences. Much like online and mobile games surge to popularity then decline among the masses, manufacturers must stay atop current trends by updating their design and portfolio of games to remain current with the expectations and preferences of players.

This year, for example, GameCo will release new products and features inspired by market testing and focus groups: bar-top hybrid games, multi-player mode, post-game leaderboards (to compare high scores with other players), and the option to purchase in-game upgrades to enhance the play experience.

Features aside, however, the appeal of a particular game to players is often the game itself, and the art of choosing an online or mobile game to “gamblify” is a tricky one.

“Certain games might be great entertainment products, but not good casino products,” says Meyerhofer. “For a game to be successful in this industry, we need to truly understand the gambling proposition behind it.”

Though player preferences ebb and flow, a few things are certain: skill-based games are here to stay, and “if we make the games fun,” says Georg Washington, CEO of Synergy Blue, “the profitability will follow.”

Though today’s hybrid slots have only been around since 2016, games like blackjack and video poker demonstrate that the demand for skill-based games has been around much longer. Despite their popularity, the debate between manufacturers and operators surrounding the performance and profitability of these devices continues.

Over time, manufacturers have learned that hybrid games are capable of ushering in a new era of gamers who don’t typically play slots—players who prefer games where they can make a meaningful impact on the outcome. And manufacturers have the evidence to back up their claims. Slot data show that people playing skill slots often don’t use loyalty cards, suggesting they aren’t regular players of traditional slots. By offering a new gaming experience, casinos are providing variety and creating entirely new streams of players, revenue and utilization.

“Ultimately, that’s what the industry needs for sustainability and growth: the revenue generation of a slot machine, but from something that attracts a different audience and creates incremental revenue without cannibalizing pre-existing slot revenue,” says Graboyes. “Profitability ultimately comes down to occupancy.”

On the flip side, operators argue that hybrid slots are a gamble for casinos—viewing the space that these experimental games occupy as space that could be better filled with well-known and well-performing games. Not only this, but since the conclusion of a wager in a hybrid game takes more time than in traditional slots, there are fewer chances for a player to reach a winning outcome in any given slot play session.

The problem is that these winning outcomes are what keep games “sticky”—keep players coming back for more.

Skill slots are still a new technology, and manufacturers are learning how to balance the expectations of both operators and players. In 2019, manufacturers will release new games with improved betting velocity and floor averages on win-per-unit that meet or beat those of traditional slots.

Looking to the Future

For the next few years, the industry will remain in the experimental phases of hybrid slot design and implementation. Manufacturers stress that, though their games have been on the market for several years, innovation and the creation of a truly successful product takes time and trial and error. Aggressive innovation is a complex process, and this complexity only increases in a highly regulated industry like gaming.

“It takes longer for new gaming concepts, especially radically new gaming concepts, to make it to the casino floor where operators and manufacturers can actually get real data about their popularity and their performance, because we’re a regulated industry and can’t afford to make mistakes when we put wagering products on the casino floor,” says Sahl. “It’s expected that there will be way more failures than successes. The important thing is that those failures are used to improve the chances of success when we go back to the drawing board.”

The industry conversation surrounding hybrids is nowhere near over. It’s just getting started. Manufacturers will continue to seek investors for research and development to ensure true sticking power for their games.

“Major slot companies spend, what, $150 million a year on research and development, and maybe only one or two out of 10 of their games are successful? How can a segment of the industry as new as ours be held to the same standard?” says Graboyes.

“So if we make the greatest game in the world, but it’s on a slot floor where no one knows it exists, I don’t think it’s necessarily realistic for that game to perform right out of the gate,” says Graboyes. He says the job of marketing should be a 50-50 split between operators and manufacturers.

“Tools like social media, live streaming platforms and cost-per-acquisition signups into loyalty programs are just some of the ways we can and should be promoting our games to new audiences,” he says.

The Importance of Working Together

Now is a critical time for manufacturers big and small, operators, regulators, and even university educators to work together to create the gaming experience of the future.

“It’s our belief at Gamblit that we’re not in the competition phase at this point,” says Meyerhofer. “We feel we’re better off with more product supply from more manufacturers.”

“We’re in that stage where cooperation is the best bet for innovation and the industry,” says Meyerhofer.