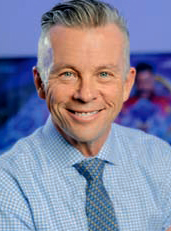 Sega Sammy is primarily a Japanese pachinko company, but began looking seriously at the casino industry when gaming first was mentioned for Japan. Almost a decade ago, Sega Sammy tried to break into game manufacturing with some very large—and very expensive—multi-position games. Now, Sega Sammy Creation is back with smaller and more manageable slot games. Scott Winzeler, a veteran of IGT and other slot companies, has taken the reins and explains the Sega Sammy strategy. He spoke with GGB Publisher Roger Gros at the Sega Sammy offices in Las Vegas in November.

GGB: Sega Sammy is a multi-national company that plays in a lot of spaces. How does it relate to gaming?

Winzeler: Probably the most recognizable part of our company is the Sega brand. We celebrated the 60th anniversary this year. In 2004, Sammy, which was the No. 1 pachinko manufacturer in Japan, acquired Sega. The company has a history of developing gaming products, whether it’s arcade products, console products, pachinko products, or since a few years ago, casino gaming-style games.

Because they made great pachinko and pachisuro machines, was that the reason Sega Sammy thought they could make gaming machines?

I think that’s part of it. They knew how to make great spinning-reel games, even though the regulations and mechanics are different. Also that was about the time they began discussions about integrated resorts in Japan, so I believe it was a combination of things that focused their attention on gaming.

And one of the resumé builders, I guess you would say, to make an application to run a casino in Japan was to say we’re a licensed entity. Many people told us you don’t go after the Nevada license as your first step into the U.S. There are many easier ways to get into the market, but they wanted to have that flagship license. At the end of 2017, we got our manufacturer license, and last year we got our product license.

In terms of R&D, how much has the pachinko/pachisuro business influenced game design for the slot machines?

We have about 70 engineers in Japan, and the majority of those come from the Sega side of the business. We also used a few third-party content developers, some of them here in the U.S. And, another facet of our game design comes from the Sammy side, even though we’re totally separate entities under the same umbrella.

Explain where Sega Sammy is now in the market.

When we started Sega Sammy Creation four years ago, the first thing we had to do was design a product, which took a couple of years, and then the approval took a couple of years. So when we finally rolled out a product we could sell, it was basically a 4-year-old game and cabinet. So we knew we had to refresh, and last year we designed a new product that we had planned to launch at G2E 2020.

What we are showing clients now is a new cabinet called the Genesis Crest, and we have a suite of great games we can install. We think it’s a game changer for our company. We have 300 percent more visible display space than the original cabinet. There’s a 13-inch player interface, a 49-inch display, which we believe is the largest “for sale” display in the business, and a 27-inch topper above that, which can present game content or just be an attractor.

Where would you like to see Sega Sammy Creation going over the next five years?

I have a directive from the parent company to grow this company to be a stand-alone entity so over time we’d bring more of our development resources here in the U.S., be licensed everywhere in North America and placing products in all of those jurisdictions. After that was accomplished, we’d look to South America and Europe. World domination is the ultimate goal (laughing).