How Southeast Asia is using gaming as an economic generator 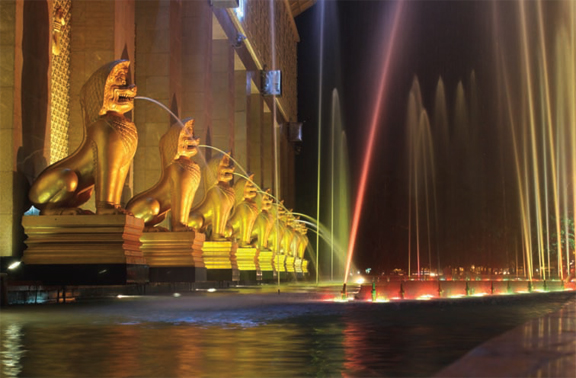 It seems like an eternity since we heard discussions about the robust nature of gaming in Southeast Asia. Recent discussions have surrounded the continued development of brick-and-mortar facilities in areas like Vietnam, Laos and others. Most of the concerns about gaming were related to the crackdown on online gaming that had been influenced by China and the geopolitical pressures they propagate to exercise their policy views on various parts of the world.

However, SARS-CoV-2 came and shuttered the gaming world as part of the Great Shutdown. Since then, many existing land-based gaming properties have struggled to reopen or, if open, are operating at less than full capacity.

Part of this has been due to restrictions at the local level, but part of it has also been due to a lack of visitation levels upon which these markets had become dependent, especially visitors from mainland China. However, history can still show how gaming continues to be an economic engine for those that have forged ahead and offered a model for others as they re-emerge from the Great Shutdown.

ASEAN as a Region

Of the 10 countries that comprise the Association of Southeast Asian Nations (ASEAN), only Singapore and Brunei have GDP per-capita levels that exceed the global average. In fact, GDP per-capita for six of the ASEAN countries is less than half the world’s average.

The current global pandemic provides an opportunity for some of the ASEAN countries to address weaknesses in existing gaming regulations, eliminate or reduce illegal gaming operations, and attract new investment that will accrue benefits to the country and the population.

For religious or political reasons, not all countries will, or should, pursue the development of an integrated casino and entertainment industry. But for those that do, there is a benefit in terms of increased tourism, new high-wage jobs, economic diversification, and meaningful investment in high-traffic properties and the infrastructure necessary to support these projects.

GDP as a Benchmark

Indonesia has the largest GDP of the ASEAN countries, but GDP per-capita is approximately 36 percent of the world’s average. Because Indonesia is also the world’s largest majority Muslim nation with 87 percent of the population identifying as Muslim, the gaming industry would not likely be viable in that country.

Since 1975, the Laotian government has been a single-party communist state, but it began allowing limited private ownership and relaxed foreign investment laws in the late 1980s. Agriculture is the leading industry in Laos, accounting for approximately 20 percent of GDP and almost three-quarters of total employment.

In recent years, the country has benefitted from significant foreign direct investment (FDI), particularly related to hydropower dams along the Mekong River. In an effort to increase the attractiveness of the country to foreign investors, the government has created special economic zones with generous tax incentives. While gaming is technically illegal in Laos, there are three casinos allowed to operate in these special economic zones. There is also a number of illegal casinos that continue to operate, particularly in northern Laos, despite police crackdowns.

Meanwhile, Myanmar remained essentially under military rule from 1962 until 2016, when the new government led by the National League for Democracy party was sworn in. However, civil unrest with the ethnic Rohingya minority has inhibited tourism to and investment in Myanmar, with the U.S. State Department characterizing violence in August 2017 as ethnic cleansing.

While the government has instituted reforms to enhance the investment climate, Myanmar remains one of the poorest countries in Asia with about one-quarter of the country living below the poverty line. The economy is mostly agriculture and natural resource-driven, but according to data from the Ministry of Tourism and Hotels, there has been an increase in foreign investment in hotels. Since passage of the 1986 Gambling Law, casino gaming is illegal in Myanmar, with the exception of two legal resorts approved in 1992 to boost tourism. Similar to Laos, there are a number of illegal casinos operating in Myanmar.

The Case for the Opportunity

There remains substantial underserved demand for gaming in Asia, or as Sheldon Adelson noted, “Asia can handle 10 Las Vegases.” Both Laos and Myanmar are easily accessible from large, wealthy populations in China, Vietnam, Thailand and India, and could be economically viable as foreigner-only destinations. There remains, however, a number of other issues to address for the industry to be viable in those countries, including improved roadways, better connectivity to air routes, electricity infrastructure, and telecommunications activity.

Other items to be addressed in new and updated gaming laws are a reasonable tax rate, a robust regulatory regime prepared to enforce the laws, and anti-money laundering laws consistent with the recommendations of the Financial Action Task Force. The laws could also decree certain requirements, like a minimum investment or the inclusion of certain amenities. This would ensure that only the largest, multi-jurisdictional operators could satisfy the requirements, thus ensuring proper safety measures are adopted and lending to the potential for ancillary investment in the community, such as transportation and schools.

Gaming as the Economic Engine

There are two great examples of gaming as the economic engine that exist in Southeast Asia today: Singapore and Cambodia.

One can look at the growth in Singapore as a template on how to run an effective process to launch a gaming enterprise. Gross gaming revenue levels of nearly $3.4 billion represent 0.9 percent of GDP for the republic. Tourism has also been the contributor to that factor, and has enhanced the multiplier effect, not only in terms of visitation to the market, but also in terms of the average length of stay for visitors from across the region.

One of the better examples is Cambodia, and the growth caused largely by one company, NagaCorp, and its flagship property, NagaWorld in Phnom Penh. While others have flirted with development in Sihanoukville, Naga’s property has proven to be a cornerstone for the country’s overall economic growth.

Looking over the last two and a half decades, the contributions have been remarkable, considering the development cycle of NagaWorld from a water-based facility on the Mekong River into a large integrated resort and a dominant gaming operator in the region. From the initial riverboat barge to the development of Naga 3, the team at Naga has developed both gaming and non-gaming amenities that continue to serve as an economic engine for the country, creating thousands of good jobs that have a multiplier effect on not just the country but the region. The chart below illustrates this growth over the last 25 years.

The Mekong Region provides some of the greatest opportunity for gaming to be the economic engine that further advances growth in Southeast Asia. The industry will struggle during Black Swan events, such as the Great Shutdown, but there will be opportunities for expansion if established properly. This includes building a strong economic argument and cornerstone for development as well as ensuring strong regulations to serve as a guide for compliance. This allows operators and developers to pursue only the best opportunities that can create a win-win scenario for a market that can benefit in multiple ways. 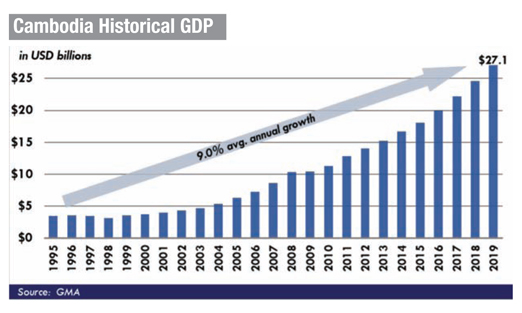 Two of the best cases for development include Laos and Myanmar, as mentioned earlier, that are still developing and need further investment in infrastructure such as transportation (roads and air lift) and telecommunications to modernize the region. Vietnam has already begun to further develop gaming as an engine, but its ultimate success will be determined by finding the right partner in the right regulatory environment that can serve as a catalyst for growth.

While not all will be able to replicate the opportunities created by Cambodia and Singapore that have proven themselves as solid models, there is a formula to success for government to evaluate and implement a thoughtful plan for growth and opportunity.

The greatest challenge to this is likely the geopolitical influences of the region. While this includes the current tension between the United States and China, this also touches on the social balance that the Chinese government seeks through its own citizens and their ability to travel, while balancing the expansion of infrastructure through the Belt and Road Initiative in regions where China seeks further influence and access. This could be a concern to these and other expanding markets that will emerge from the bubble created by the Great Shutdown, and will likely cater to a significant increase in Chinese tourists.

The good thing about these markets is that they will likely not be on the radar of the coming “black list” that China seeks to produce as it cracks down on gaming activity by its own people, both at home and aboard. Likewise, a strong regulatory regime, combined with operations consistent with “best practices” safety procedures, could ensure these countries are not placed on the black list.

As mentioned in a September article in the South China Morning Post, at least 1 trillion yuan (US$145.5 billion) flows out of the People’s Republic of China (PRC) through gaming activities every year. China sees this as an economic and national security risk. This unraveling will continue as Xi Jinping looks to strengthen his influence on the social balance in the PRC.

The challenge for these jurisdictions will be to balance their current economic drivers with the ability to turn to gaming as an engine for development than can ignite further economic growth and tourism. However, they must consider the social balance of protecting the Chinese customer that would contribute to visitation.

This is best done through solid regulations including anti-money laundering regulations that will curry favor with Xi Jinping. While gaming can serve as a strong source for development, the industry continues to face the challenges of politics that can stifle its growth potential.

However, it remains today one of the strongest sources for an emerging jurisdiction to bring investment, job growth, and tourism growth that will form a basis for long-term success of a market if done properly through a strong regulatory environment.