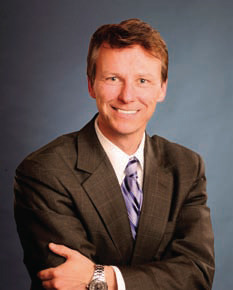 The Hard Rock Sioux City debuted in August 2014, replacing an aging riverboat owned by Penn National Gaming. After leaving Atlantic City, Todd Moyer had extensive experience in Las Vegas and Iowa, running the Diamond Jo in Dubuque two separate times. As the first general manager at Hard Rock Sioux City, he’s the perfect leader, with experience in entertainment and gaming. He spoke with GGB Publisher Roger Gros from a suite in the small boutique Hard Rock Hotel in early September.

GGB: Hard Rock Sioux City is a unique casino. How have the hotel rooms in the renovated warehouse and the F&B options helped the city?

Moyer: It really has brought a great anchor to downtown, and we have great access to the historic Fourth Street District, where there’s some great shops and restaurants. And this warehouse building was built in 1905. It was the Simmons Hardware Company, and they had everything from farming implements to knives.

Let’s talk about how this project came to be. There was a casino here in Sioux City, the Argosy Casino, since the start of riverboat gambling in Iowa, back in the ’90s. How did the license get transferred over here?

Just like many other jurisdictions that have had limited gaming, they’re looking for the full entertainment experience—more to do than just gaming. In Iowa, each casino is co-owned by a not-for-profit organization. Ours is called the Missouri River Historical Development. They went out and looked for partners that could build a great property that would bring people in from far away, and offer them something to do other than just gaming. So, happy to say in our first year we had 2.1 million visitors. We built a great facility, not just for gaming, but a beautiful entertainment venue inside, called Anthem, that has a capacity of about 850 people. Then there is an outdoor venue, Battery Park, that can do concerts for up to 4,000 people. So we’ve got a 54-room boutique-style hotel, great restaurants, and a really cool vibe.

You work for the Las Vegas-based company that manages the property. In addition to your nonprofit partner, who are the other ownership interests in this property?

We’re owned by a company called SCE Partners—Sioux City Entertainment Partners. And we’re managed by Warner Gaming. Warner Gaming is headed by (former Station Casinos executive) Bill Warner, so they are the operating partner in it. And MRHD is made up of some local movers and shakers, if you will, and philanthropists that have kind of joined forces to disseminate the funds. We support MRHD with just over $3 million annually, in our first year, and I’m sure that number will continue to go up.

Let’s talk about the gaming market. Hard Rock is the only casino in Sioux City, but there are some Indian casinos around as well. Do you have a lot of competitors, or do you pretty much control this market?

I think we control this market, for sure. There have been some new gaming jurisdictions pop up. The properties down in Council Bluffs, Iowa, have done some big expansions, and they’ve improved their product over the last decade. And there’s a new casino that opened three years ago in Larchwood, Iowa, which is just east of Sioux Falls, South Dakota.

We had lost some of the traditional Sioux City gamers that left this market and went to those other jurisdictions, but now we’re getting them all back with a much more competitive product here. Last year, we made about $77 million in gaming revenue, on 2.1 million visitors. So, the average person plays about $35 on the gaming floor. The rest of the time, they’re out here looking for an entertainment experience, a great meal, a great hotel room and a show, or maybe to do some shopping.

Now, you’ve also got a hotel across the street, which is kind of a conference center hotel. The Sioux City Convention Center is a few blocks down from here. Are you playing a part in that meetings and convention space?

I really believe high tides raise all ships, and we’ve been a catalyst for growth here, and other groups have built hotels all around this area. We buy rooms for our players, but also they do a great job of doing packages with us—a room and a show, a room and dinner really works.

Is there anything unique about the Iowa gambler that you don’t find somewhere else?

I’ve worked in Atlantic City, and then I spent about five years in Las Vegas, and now here I am in Iowa—the three gaming capitals of the country. But one thing I’ll say that’s unique about Iowans, is they are just more relaxed, kind of laid back. I remember in New Jersey, if you ever had a hiccup with a promotion or a sweepstakes, or you open the doors a little bit late for a party, the customers there would let you know about it. You would think people are a little bit more forgiving. So, it’s fun. I love the labor pool here, too. The team members that we have hired are just good, very friendly, outgoing, personable people.