When it comes to bringing in the bucks, PA gaming is a proven winner. Could high taxes and big buy-ins handicap this race? 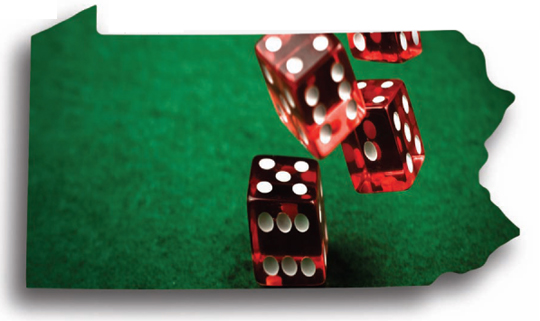 For total gaming taxes, Pennsylvania is No. 1 in the U.S., surpassing even Nevada. No wonder lawmakers love it.

It was 2004 when former Governor Ed Rendell pushed casinos as a way to create jobs, cut property taxes, benefit host communities and prop up a struggling horse racing industry. Since then, the industry has grown from a single racetrack slot parlor to a dozen casinos scattered across the state: inside a former steel plant in Bethlehem; near hallowed ground in Valley Forge; at a onetime honeymoon hotel in the Poconos; in a onetime Philadelphia sugar refinery; overlooking the Pittsburgh waterfront; and elsewhere.

Despite steep tax rates—54 percent on slots, 16 percent on tables, plus multimillion-dollar license fees—the industry continues to thrive. A 13th casino, Philly Live!, a project of the Cordish Companies, is on track to open next year. And that’s not all. In 2017, a sweeping industry expansion plan made room not only for sports betting and iGaming but mini-casinos, truck stop gaming and airport VGTs.

Some analysts are concerned that lawmakers have come to see gaming as an ATM, a well where they can withdraw cash whenever they need it, in lieu of belt-tightening, raising taxes or trimming services.

A September 2018 editorial in the Delaware County Daily Times said legislators “never met a bet they didn’t like. Every time the state needs money, it decides to roll the dice.”

Is Pennsylvania pressing its luck?

Gaming consultant Robert Ambrose says the Pennsylvania market isn’t too crowded—yet—and growth has been “cautiously slow, consecutive, steady,” as properties expand both their gaming and non-gaming products. “The diversity of casino locations throughout the state geographically presents great opportunities for sustainability in Pennsylvania,” Ambrose says.

But he has reservations about the ongoing expansion. “As long as state power brokers view gaming as a tax source, they’ll keep initiating things like truck stop casinos and satellites. The question is, at what point does the market become oversaturated? We won’t know that until operations begin to fail.”

Moreover, he adds, the source of all those revenues, consumers’ wallets, isn’t inexhaustible. “The state tends to forget that discretionary spending—which may not be discretionary at all in some cases— also goes into the lottery, and adding mini-casinos begins to take away from the entire model. In a state the size of Pennsylvania, at what point does cannibalization take place?”

Steve Gallaway of Global Market Advisors says industry growth should be based on market demand, not the demands of lawmakers looking to plug budget holes. Gaming in Pennsylvania has worked so far “because of the rich gaming market in the Northeast corridor, but it has its limits for the long-term success of the product,” he says. “But the high tax rates prevent casinos from evolving into full destination integrated resorts; there’s not enough profit left over to justify large-scale capital projects.” (That’s not universally true, he adds: the likely new owners of Sands Bethlehem, Wind Creek Hospitality of Alabama, plan to invest $190 million into the project, adding a 300-room hotel and possibly an indoor water park.)

“State and local governments should not pass gaming with a desired budgetary number in mind,” Gallaway continues. He suggests that regulators have been “victims of wag-the-dog politics as legislators use gaming to fill the budget gap as opposed to making tough budgetary decisions or looking at additional revenue options.”

But high taxes and license fees haven’t kept operators away, notes Doug Harbach, spokesman for the Pennsylvania State Gaming Control Board, who insists that concerns about higher taxes and potential saturation have so far been unfounded. “We’ve seen continual increases in our gaming revenues year-on-year, even after opening the 12th casino,” he says.

Pennsylvania casinos set new records for profitability in 2018, generating more than $3.2 billion in revenues, of which state and local governments pick up about $1.3 billion.

Originally, Harbach says, Pennsylvania casinos were seen mostly as locals properties, not necessarily tourism destinations, but that’s changing, too, with the Sands expansion and upgrades elsewhere: Rivers Casino in Pittsburgh, for example, just opened a $3.5 million event center, and in 2017 was approved to add a $55 million hotel.

According to Harrisburg news outlet WITF, the limits of the state’s aggressive gaming expansion became apparent last year, when licensed operators failed to snap up all 10 available mini-casino licenses. But Harbach says that’s proof the market is finding its own level. “We auctioned five licenses and got no more bids. In the future there’s the option to open up the auction process for five more satellite casinos, but the market will gauge what’s enough.”

After those bids are vetted and approved, the mini-casinos—maybe not so mini with up to 750 slot machines and 40 gaming tables—will be located in “underserved areas” across the state, including two inside vacant mall department stores, Harbach says.

Michael Soll, president of The Innovation Group, says high tax rates “so far have not been prohibitive” to operators who want to do business in the Keystone State. The mini-casinos “do not necessarily constitute a saturated market, and they were allocated and distributed so they fit into gaps in the market, between major properties. It seems to be logical, and we don’t on the face have concerns about oversaturation now, but we won’t know until some of these properties open.”

Saturation is likeliest in the Philadelphia metro area, which soon will host three casinos: Philly Live!, Harrah’s Philadelphia and SugarHouse. The latter—a property of Rush Street Gaming, which also owns Rivers in Pittsburgh—fought for three years to keep Live! from being built in the city’s stadium district, but finally dropped its objections in 2017, after Governor Tom Wolf repealed the state’s ownership restriction on casinos.

SugarHouse and Harrah’s plan to remain competitive with sports betting and iGaming (though the latter is up in the air with the DOJ’s recent waffling on the Wire Act). In January, SugarHouse opened its sports book just in time for the Super Bowl. Harrah’s quickly followed, moving 187 slot machines to make room for its sports betting facility. Harrah’s also added a dedicated poker room and interactive sporting games including Topgolf Swing Suites, which includes variations like virtual Zombie Dodgeball.

In December, Harrah’s Philadelphia General Manager Chris Albrecht told the Gaming Control Board that “the combination of these three new assets will really allow for some increased play in the overall facility, as well as on slots and tables.”

“We’re a local-regional facility here,” Albrecht observes, “with folks coming from the tristate area for a two- to three-hour experience. For us, it’s about how we continue to serve our core customers—a Philly fan is an avid fan—and make some new ones along the way.” The property also offers 150 live racing days a year and daily simulcasts from major parks like Belmont, Saratoga, Del Mar and Gulfstream.

When it comes to Philadelphia, Harbach concedes there may be “some robbing Peter to pay Paul” after Live! opens. Concerns about new competition could extend to the Parx and Valley Forge casinos, both about a 30-minute drive from Philadelphia. But Harbach says Live! could also bring in an all-new customer base, people who stop in at the casino after attending nearby sporting events.

In Ambrose’s view, Live! will “exceed all expectations,” benefiting from traffic at Xfinity Live, a dining and entertainment corridor at the Wells Fargo Complex, and its proximity to major interstates and Philadelphia International Airport.

“Harrah’s and SugarHouse are more isolated along the water, and their footprint is different,” he says. “How they’re able to step up their game through marketing offerings and amenities will determine how they sustain their place in the market.”

Eric Schippers, senior vice president of Penn National Gaming, railed last year that the push for higher revenues in Pennsylvania “not just squeezes the golden goose but strangles the goose.”

“Double-digit tax rates are always a challenge for operators,” agrees Ambrose. “Online and sports betting are game-changers for all properties in every state, and it’s just beginning—in Atlantic City, both are lifelines during the off season.” He argues that states should consider tax rates “with caution,” always keeping sustainability in mind.

“This is not a cure-all for budget shortfalls, and high tax rates impact long-term growth. New Jersey has taken a more reasonable approach with the tax structure at 15 percent for sports betting, and Nevada sports betting returns 6.75 percent to the state. Seven to 15 percent is a more logical approach.”

But Harbach defends the Pennsylvania model, and looks forward to big paydays, both for the state and operators. “The American Gaming Association says there’s approximately $160 billion of sports betting going on underground annually. If you pull some of that aboveground, legalize it and regulate it, it has the opportunity to be a significant market. Again, we have a high tax rate according to some experts, higher than Delaware or New Jersey, but that hasn’t kept operators from applying and getting these places open.”

Despite critics’ assertions that Pennsylvania gaming has become a cash grab, “we’re trying to do this right, to protect the public,” Harbach says. “We’ve been deliberative in getting things up and running, looking long-term rather than short-term.”

Look for airport gaming terminals sometime down the road, after online gaming is up and running, and as for those truck stops, the pile-on effect will be negligible; so far, 65 locations around the state have applied, and those that qualify will have only five machines per unit. “It’s never going to be a huge market,” says Harbach. “Even if 50 operators qualify, we’re talking about a total of 250 machines statewide.”

All in all, says The Innovation Group’s Soll, “Pennsylvania compares favorably to similarly regulated markets. As far as the latest wave of licenses, I think anyone would want to take a step back and see how they’re absorbed before new competition is introduced at any point, and I expect that to happen.”

Ambrose advises existing operators to “tap into their own respective markets on a consistent basis with strong loyalty dividends and special promotions along with a great property experience” to solidify their customer bases going forward. “If a property fails to ‘identify and promote’ to each of their niche markets,” he says, “their bottom line could fall short.”

Gallaway, meanwhile, sees a parallel between gaming proponents in Harrisburg and Russell Long, the late Louisiana senator and Washington kingpin who famously said, “Don’t tax you, don’t tax me, tax that man behind the tree.”

Gallaway calls the 2017 gaming expansion “dipping into the well too much, with bureaucrats picking numbers to fill the budget as opposed to what the industry wanted or could support.”