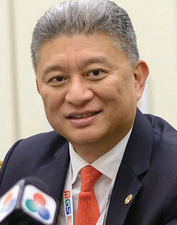 When Macau opened up casino gaming, several gaming suppliers became market leaders, including Paradise Entertainment. Chairman and CEO Jay Chun was very connected to Macau leadership. He developed an electronic table game that fulfilled all requirements of Macau regulations, and eased the crunch on live table games. Chun’s Paradise is now making aggressive moves into the U.S. with Empire Gaming. He spoke with GGB Publisher Roger Gros at the GGB offices in Las Vegas in January. (This interview was conducted prior to the outbreak of the coronavirus in China.)

Over the past year, we’ve been reading about a lot of difficulties that Macau is suffering, but what is the reality on the ground there?

Jay Chun: We just had a new government take power on December 20. In a speech by the new secretary of the finance and the economy, he talked about the casino market and the forecast for 2020. He was thinking the mass market would be getting stronger, and he is very confident about the entire market. This is also very good news for our gaming equipment side, because expanding the mass market will be very favorable for the gaming equipment and EGMs.

It seems that we’ve seen the VIP segment shrinking quite a bit. Is it because the Chinese government is being a little stricter in terms of visitation to Macau, or transfers of money, or some other factors?

This one is a little bit more complicated. I think the most important thing is the entire regional economy, because we saw a little bit of a slowdown overall. But the things you mention all impact the VIP sector.

How about the trade war between the U.S. and China? What impact has that had on Macau companies?

Well, for the Macau side, half of the operators are American companies. But the signing of the first stage of the trade agreement is good news for everyone. I think it will benefit the Macau market.

Has the opening of the bridge between Hong Kong, Macau and Zhuhai helped?

Yes, very much. From the Hong Kong airport to Macau, about 40 minutes. So I think this bridge has really helped those visitor numbers grow.

What’s the opinion of the new chief executive, Ho Iat-seng? Did he have a view on gaming before he came into office?

No, he didn’t talk too much about the gaming sector before his election, but in his early statements, he said he wants to continue business as usual for now. I don’t think there will be too much change.

The Chinese government has always been interested in growing the non-gaming amenities in Macau, so it’s not all focused on gaming. How do the casinos respond to that?

For the long term, the conditions of any license renewal will focus even more on non-gaming attractions, and how to diversify the economy. There are plans for theme parks, esports arenas and more meeting space.

Paradise Entertainment was one of the first companies in Macau to introduce electronic table games (ETGs) and electronic gaming machines (EGMs). How has that helped the casinos in Macau?

The Macau casinos face a lot of the labor issues—mainly the cost of labor, which is extremely high for table games, but also because they can never find enough dealers. Because of that, the minimum bet must be very high. In most Cotai casinos, the minimum bet is 100 Hong Kong dollars. It’s very expensive.

ETGs give the operator the chance to offer a much lower minimum bet, which is helpful to the mass market and is something they can afford.

Are ETGs counted as slot machines or table games?

Those stadium ETGs are considered one big table that can be linked to up to 100 terminals.

Your ETGs can incorporate with all the systems involved in the casinos, which can often have different accounting systems or player rating systems.

Of course. In Macau, we do have many kinds of systems for the associated products and market. We also have some table systems that are similar to our slot systems. We have some cheating issues, and so we have several chip tracking systems.

How has technology improved ETGs since you introduced them 15 years ago?

There are many new developments that have come on the market in the past few years. And where we once had live dealers, there are now games where we have robot dealers that still use real cards. We call this semi-auto, because we still need a real dealer to change the cards.

You’ve been making a big push into the U.S. with Paradise and LT Game. Does IGT still distribute for you?

We sold the rights to IGT a few years ago for outside Macau, and it did well initially, but 2019 was much better. IGT isn’t distributing the games anymore, but they still get a royalty.

You were also one of the founders of the Macau Gaming Equipment Manufacturers Association and have been involved in their trade show, MGS Entertainment Show. Why is that so important to Macau?

We promote this to the Macau government because we want to encourage them and educate them on how important the gaming equipment market, specifically the EGM market, is for Macau.