IGT continues to maintain a focus on game development, testing and customer outreach as the industry reopens

Every year, IGT launches new cabinets and a complete lineup of games to fill all of its diverse hardware formats. This year is no different, with one exception. Normally the manufacturer displays these innovations at the Global Gaming Expo.

Of course, as we all know, this year is anything but normal, but the fact there is no G2E this fall won’t stop IGT from displaying new cabinets, new video and stepper slots, new video poker games or new system functionality to its customers. On September 23, the company was slated to hold an “IGT Virtual Showcase” event, a 60-minute combination of presentations and video footage showcasing all of the above.

And then there’s the “IGT Road Show,” a sort of mobile trade show in a custom-built 40-foot trailer that has been visiting customers across the U.S. and Canada. The Road Show, which had it origins with IGT legacy company GTECH, features a rotating portfolio of IGT’s newest slot games, ETG products, systems and more.

IGT, despite the pandemic shutdowns, has plenty of new product to display at these unconventional trade events. “We have continued to remain very focused on product development,” says Nick Khin, IGT chief operating officer, gaming. “As you’ll see, we have got a lot of new games and new form factors.”

Those new cabinet introductions have become an annual rite for IGT. This year, there are no fewer than five new formats, which began with the release of the PeakBarTop unit early this year and continued this summer with the unveiling of two more new cabinets in the Peak hardware series—the PeakSlant49 and PeakSlant32.

Each of those new cabinets is being launched with an exclusive suite of games, of course.

The PeakSlant cabinets can perhaps best be described as portrait cabinets with the comfort and ergonomics of slant-tops. The PeakSlant49 premium cabinet features a progressively curved 49-inch display and advanced technology throughout. It was launched this summer with the inaugural game Fortune Coin Boost!, which will be followed up with a content pipeline that includes Bubble Blast Link and Dragon Lights.

Bubble Blast Link is a game series that has been an IGT success in Australia for several years. Base games including Treasures of Atlantis, Genie’s Wishes and Spells N Whistles all feature the “Bubble Catcher” game mechanic, in which bubbles float over the reel set during a spin, and pay off if they land on a pearl symbol, with credit awards, “Bubble Multipliers” or free games. In the jackpot feature, the player can win several credit awards in addition to a progressive.

Add a wheel to the PeakSlant49 and you have the PeakSlant with Wheel, home to Wheel of Fortune Mystery Link, the first version of IGT’s venerable game-show franchise to include a hold-and-re-spin bonus feature and player-selectable multi-denom function.

The PeakSlant32 cabinet is a core video cabinet featuring three 32-inch full-HD monitors, all integrated for a seamless appearance under dynamic attract content. “We’ve got some really exciting new content we’re launching on that cabinet as well, exclusive to that form factor,” says Khin.

“This is the only triple 32-inch for-sale cabinet in North America,” adds Michael Brennan, IGT’s vice president of product management.

The first is a sequel to one of IGT’s most popular games, enhanced with modern features and more advanced animation. All the popular features of the original Wolf Run are present, including the wild Howling Wolf, with special bonus features including a “Wilds Added” sequence that can randomly add up to 16 gold wild symbols to the reels.

Treasure Box is a linked progressive with two base games centered on its bonus, which introduces a new persistent decrementing feature, and adds variety and new twists to a hold-and-spin playoff. Wu Dragon is a clone of the popular theme Star Goddess. Frames appear on various reel symbols, and the dragon character’s breath periodically turns them into wild symbols.

The other Peak cabinet, the PeakBarTop, is gaining steam after being released shortly before Covid-19 hit. The advanced bar-top unit, which is a drop-in replacement for IGT’s legacy G20 bar-top unit, adds a lineup of the company’s most popular video reel slots to the standard video poker and keno games. It features a 23-inch curved screen that minimizes glare, a smartphone charger, Bluetooth capability and an easily accessible maintenance setup.

“We’ve got quite a lot of PeakBarTop units out in the field now, I’m pleased to say,” Khin says. “Initial results from the PeakBarTop are very, very encouraging. I’m really excited about the performance we’re seeing.”

One more new product in the Peak hardware group is a new compact Peak Terminal for IGT’s portfolio of electronic table games. The new player terminal places the ETGs on the advanced Ascent platform, according to Paul Baskerville, director of ETG product management, who notes that the company’s new multi-game ETG allows the player to instantly switch between three different table games.

The new terminal uses the same monitor as the PeakBarTop. “This reduces the space footprint,” Baskerville says. “Operators can now place the ETG player terminals in various configurations for social distancing.”

One more new cabinet this year is serving a dual purpose for IGT in video lottery terminal markets and as a new video poker form factor. Called the Cobalt 27, it features dual 27-inch monitors in an ergonomic setup designed to fit into the tight spaces typical of VLT locations.

IGT launched the new Cobalt 27 over the summer in Georgia and Louisiana, as well as IGT’s first installation in a Pennsylvania truck stop. The launch includes a new custom set of popular IGT video reel and video poker games.

Other standouts in IGT’s lineup of new premium video offerings include several games that employ the popular persistent-play mechanic in a variety of ways. 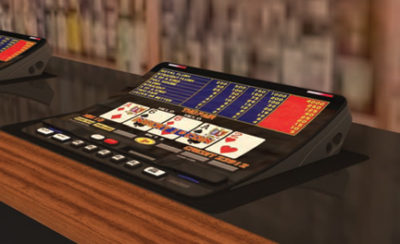 One of the highlights on the company’s CrystalCurve cabinet is Regal Riches, which introduces the brand new Progressive Wilds mechanic. In the base game, Blue Gems increment the Guaranteed Wilds feature, which randomly can fill the main video screen with wild symbols. In the free-spin feature, special gem symbols increment the number of wild symbols in Minor, Major and Mega Free Games pots. When triggered, the feature will award the corresponding number of wilds for that pot, and distributes these wilds across 10 free games in an explosion of wild placements that can result in huge wins.

In Lunar Disc, a sequel to the popular video slot Solar Disc, the player’s goal is to collect six disc symbols to award wild symbols or a progressive jackpot. In Amazing Money Machine, the object is to collect as many coins as possible in a set number of spins.

IGT has not left its industry-topping collection of stepper games out of the new game mix. Focus on high- and mid-denomination continues plus with the nine-line 3X Wild Diamonds and 15-line 5x5x5x Jackpots, while low-denomination features several new games that add unique twists to traditional games.

Finally, the video poker field continues to be dominated by IGT. In addition to the new Cobalt upright cabinet, IGT is placing video poker favorites on the CrystalSlant premium cabinet.

“The graphics really pop on the 27-inch screen,” comments Darnell Johnson, IGT’s director of product management who oversees the video poker lineup. “The angle of the CrystalSlant screen works out great for video poker play, and the games have transitioned to the Ascent platform.”

IGT has launched new versions of its Game King and Super Star video poker multi-game platforms, which both can be placed on the new PeakBarTop cabinet. The new lineups include a combination of single-hand and multi-hand poker, as well as slot content, table-game content and several new keno games.

New video poker games this year are typical of IGT’s strategy of offering various bonus features in exchange for increased bets of six or 10 coins per hand. (The higher wagers fund the bonus features without the need to alter the pay schedule).

The original Hot Roll Poker uses a random roll of video dice to award a multiplier on the deal of certain hands. The total on the dice awards a multiplier of up to 12X, which applies to all hands in play. The new version, Super Hot Roll Poker, applies the multiplier to both the current hand and the following hand.

Another standout on the video poker side is Stack ‘Em High, a multi-hand game that awards up to nine additional hands when two Aces or Deuces, depending on game family being played, are received on the initial deal. Drawn Aces or Deuces then replicate into remaining hands, making it easier to fill in big wins.

In addition to the game offerings, IGT’s Advantage casino management system is in the spotlight of the Covid-19 era for one predominant factor—its ability to facilitate cashless, reduced-contact play in the casino.

“That’s the hot topic right now,” says Khin. “It’s been a big push for us for a number of years; IGT has been working on our cashless solution for a long time. There are not many positive things to say about Covid-19, but the one thing I can say is maybe the whole Covid-19 situation has been a catalyst for operators to think about whether or not this is the time to adopt these kinds of solutions.”

The IGT Advantage suite’s Cardless Connect solution allows a player’s smartphone to become a loyalty card, and its Resort Wallet function transforms a smartphone into a secure digital wallet, enabling players to easily transfer funds to and from gaming machines and fund play using their mobile device.

Players simply tap their phones on any Cardless Connect-enabled gaming machine to card in, then easily and quickly transfer funds between slot machines on site, as well as between a casino’s sister properties.

“We’re very excited about that,” Khin says. “We’re now working closely with a number of our casino partners to get this live. Our cashless solution is live in North America, and we’re working with one customer internationally as well to get it live.

“While other gaming industry suppliers may need third-party payment services to provide the funding gateway, IGTPay has everything a casino needs to implement a full-service cashless solution.”

And of course, the other industry segments that have been accelerated by the pandemic shutdown are online gaming and mobile sports betting. “We have seen a good level of activity there, and we continue to do well in that space,” Khin says. “We separate that space into two buckets: We have iGaming, where we have a platform that is used by the likes of Penn National in Pennsylvania, but we also have a sports betting platform. I think we’re up to 14 states now, where we have our sports betting solution live and operational. I’m hopeful that in the very near future, we’re going to be making some very big announcements in terms of wins in this area.

On the iGaming side, IGT games are live in New Jersey and Pennsylvania, and are on deck in several states considering internet gaming. According to Khin, IGT maintains a huge library of its games online. “Every time we come out with a new video game, we port to our remote gaming server,” he says. 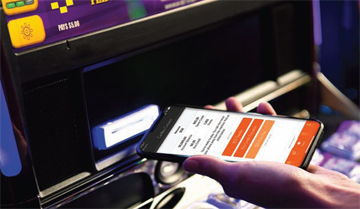 Looking forward as the industry continues to emerge from the Covid-19 crisis, Khin says one big advantage is the return of full test-bank activity on new games. IGT has prided itself on only offering games for general release that have gone through rigorous live testing to assure they are high earners.

For the coming year, Khin says the company will continue to serve every market as it returns to full capacity. “The regional markets have seen good activity since reopening, and have seen players really wanting to come back and play, and play has been robust. But then you look at destination markets, tourist markets, and they’ve struggled a little bit more than regional markets.