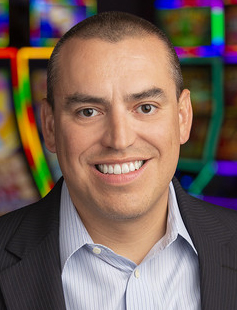 When Hector Fernandez was named president of the Americas division of Aristocrat Technologies, the company had already experienced a long period of success. As the company moved into its new Las Vegas headquarters, Fernandez was charged with keeping up the momentum. And when the pandemic hit, he doubled down on game development by keeping his staff employed and creative. Speaking with GGB Publisher Roger Gros over Zoom from his home in Las Vegas in December, Fernandez explained why that decision was made and what benefits he expects will flow from it in the future.

GGB: Before you were appointed to your position as president of the Americas, you worked in finance for quite some time. How did that help you when the pandemic hit, and you had to reevaluate how the company was running?

Hector Fernandez: Obviously, a strong finance background and training allows you to really look at numbers, dig in and understand trends and what’s happening. But more importantly than my finance background, to be honest, it was really around some of the broad-based experience that I’ve had across different industries. I’ve been very fortunate in my career to work in services at Deloitte, at the premier marketing company at Proctor & Gamble, in biotech at Amgen and at a tech company, Western Digital.

I’ve been through lots of economic cycles and shocks as well. In life you have skills and experiences. You can never substitute experiences. It really allowed us and the team to focus. So when we looked at the impacts of the pandemic, we needed to keep things very simple. Every decision we made would be around three principles. It would be around our people, our customers and our business. And we picked those in that exact order.

We felt if we could get our people and our customers right, the business would be there. Those experiences that the team and I have gone through in the past allowed us to keep it simple and focus on the three guiding principles.

One of the things you decided to do was keep your studios operating during the pandemic. Are you going to continue to do that, or are you going to slow down a bit when casinos start to come back and buy your products again?

You know, great companies invest during times of uncertainty and economic downturns. We’ve seen that throughout history, throughout the various economic shocks we’ve had. The companies that have doubled down and invested are the ones that come out stronger. We knew that was a guiding principle we needed to follow.

Innovation and having the greatest content is what‘s driven the success of Aristocrat, so it was not even a debate. Early on, we knew that slowing down any content development would just hurt the company in the long run. That’s not something we wanted to do. And quite frankly, we were fortunate that we had been conservative financially, so we could. We had the resources to invest, to risk, if you will.

You don’t just oversee Aristocrat operations in the U.S.; you also control Canada and Latin America. Have those two markets been approached any differently during this time?

It’s been fascinating, the pandemic. Because even in the U.S., each state has had a different impact and different reaction. And then when you elevate past the U.S. and you look at Canada, it’s obviously more government-controlled, so there’s a different reaction there. Then if you look at Latin America, they’ve lagged behind us from an impact standpoint and are also lagging behind us from a recovery standpoint.

The nice thing about Aristocrat is, because we’re truly a global company, it allowed us to actually leverage some of our coworkers and fellow employees from around the world, for example, Asia Pacific, on the impact (the pandemic) was having there, and some of the steps they were taking to address those things. We’ve learned a lot from our Asia Pacific colleagues.

The other thing that’s happened since the pandemic is that the European business has also come under my purview, which is fantastic because there are lots of similarities and things that we can leverage from Latin America across Europe. How do we make sure we think globally but act regionally? (We want to) develop these global principles, leverage the resources globally and then tailor to the regional specific problems that we’re trying to solve.

With all those different jurisdictions under your purview, there are different preferences in terms of games and themes, whether they want more volatility, and so on. How do you prepare your studios to introduce games in each of these markets?

Our roots are Australian roots. That’s incredibly important because gaming really took off in Australia and that part of the world before it came to the U.S., Latin America or Asia. So they’re ahead of us from a maturity standpoint.

Player preferences center around math and volatility, game content and other things. We’ve really taken what we learned from Australia and said, “How can we apply those here in the U.S. and across the other jurisdictions?” We focused on having the best content across the globe, then customizing it for a specific jurisdiction, whether it’s a route market, whether it’s a destination casino, whether it’s a casino in Argentina. We’ve never lost that focus around content, and we’ve leveraged our Australian roots to ensure that we have the best content in the industry.