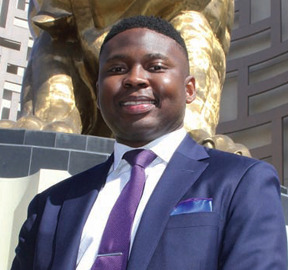 There never was any question about what Lovell Walker wanted to do when he grew up. A Las Vegas native with a father who was a dealer at Bellagio, Walker was infatuated with the casino industry from an early age.

“Like most kids, I looked up to my dad, so his role in the industry had a lot to do with what I wanted to do with my life,” he says. “I was also influenced by the movie Casino. Robert DeNiro was so cool, and it just felt right. I knew that was the path I wanted to take.”

In Las Vegas, there are many paths to a career in gaming, and Walker chose the most traditional one: attending the one college with a track record for pumping out future casino executives, the University of Nevada, Las Vegas.

During his time at UNLV, Walker was offered an internship at MGM. His first ambition may not have been his best choice.

“I wanted to be a host,” he laughs. “I thought that was where all the glamor, action and fun was.”

Glamor, however, was not what Walker got. After he graduated in 2009, Walker got a job with New York-New York.

“I started as an analyst,” he says. “I studied the business of gaming, where the money was made and how you used the numbers to make decisions. It was mostly a strategic approach, and I ended up loving it.”

He credits NY-NY President Cynthia Kiser Murphey with providing him the freedom that allowed him to advance his career.

“She’s an amazing lady,” he says. “I was working 12 hours a day and loving every minute.”

Walker later moved to Mandalay Bay as director of slots, a position which really opened his eyes.

“I learned so much about operations, technology and marketing,” he says. “Mark Bennett (VP of slot operations) gave me the key to his kingdom and really let me go. It was huge for me to get that experience and do it without handcuffs. There are highs and lows to that. Sometimes you get beat up, but it was great long-term.”

In his current job, Walker is in charge of much of the interactive gaming being introduced by MGM Resorts, most notably the new sports betting app, PlayMGM.

“We believe it’s the most advanced app on the market today,” he says. “It was developed in conjunction with IGT, and it will evolve into a casino product in the future, as well.”

Walker is also involved in MyVegas, the PlayStudio social game that features MGM properties, and the “Floor of the Future,” where MGM Grand will experiment with games and casino space designed to attract the millennials. Walker is working with another mentor, MGM Senior Vice President of Business Development Tom Mikulich, in his current capacity.

The sky is the limit, believes Walker.

“There’s so much opportunity in gaming,” he says. “In my mind, gaming has been done the same way for decades, and when I got there, all I could see was room for improvement. I’m taking advantage of everything I see.”