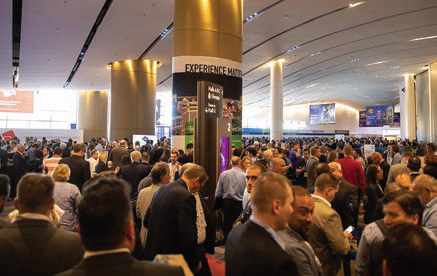 The two largest trade shows in the gaming industry took a hit last month as a result of the Covid-19 pandemic.

Association (AGA) announced the cancellation of this year’s Global Gaming Expo (G2E), the industry’s largest annual trade show and convention, due to the Covid-19 pandemic and the travel restrictions that resulted. The organizers plan to hold a series of virtual G2E events throughout 2020.

The event had been planned for October 5-8 at the Sands Expo and Convention Center in Las Vegas. The next G2E is now scheduled for October 4-7, 2021 at the same location.

A week after the G2E announcement, ICE Totally Gaming, owned by Clarion Gaming, revealed it was moving from early February to April 22-26, 2021 at the same venue, ExCeL Centre in London.

“While the world is likely to be in a much better place in April 2021, I’m certain that we will experience more bumps in the road,” she said in an email. “However, I’m confident that with the on-going support of the ICE London and iGB Affiliate communities as well as the dedication of the Clarion Gaming team, we can navigate those challenges and deliver events that all sectors of the international industry want and need.”

AGA President and CEO Bill Miller commented, “In light of continued uncertainty around a viable marketplace at a physical G2E show, global travel restrictions, and currently unknown guidance on large public gatherings this fall, we have come to the unfortunate conclusion that we simply cannot hold an in-person G2E this year.

“Health and safety have always been our top priority, and the uncertainty created by the ongoing pandemic makes this the prudent decision ahead of critical deadlines for exhibitors planning to participate.”

Miller said it was also a financial decision.

“The timing of this decision is intentional, as show exhibitors and attendees alike were facing critical, and in some instances costly, deadlines related to their participation,” he said. “I hope this helps to alleviate that pressure.”

Other deciding factors may have been Nevada’s current ban on gatherings of more than 50 people; typically, nearly 30,000 people from all over the world attend G2E. And with travel restricted to and from Las Vegas (some 16 states now order visitors from Nevada to self-quarantine for 14 days), as well as international transportation disruptions, there were many reasons to make this decision.

Several other gaming conferences have also been canceled this year, including the National Indian Gaming Association conference in San Diego, ICE North America in New Orleans and the International Center for Responsible Gaming’s (ICRG) Conference on Gambling and Addiction, which normally takes place concurrently with the G2E. The ICRG conference has been “reimagined” and will be offered in five separate online seminars through October.

ICRG has announced that it will revamp its conference as a virtual event to “focus on conveying meaningful program elements online so the world’s network of clinical, research, and industry experts can continue to collaborate virtually,” according to the organization.

ICRG made its decision based on feedback from attendees. Board Chairman Alan M. Feldman stated, “The virtual conference will continue the ICRG’s tradition of connecting stakeholders with cutting-edge research on gambling and addiction.”

Also canceled is the World Game Protection Conference (WGPC), which had been postponed from March to October in the hopes of being rescheduled during the calendar year. The annual conference draws hundreds of attendees from around the world to discuss the latest

security and surveillance technology, the evolution of slot cheating and other security threats to the industry.