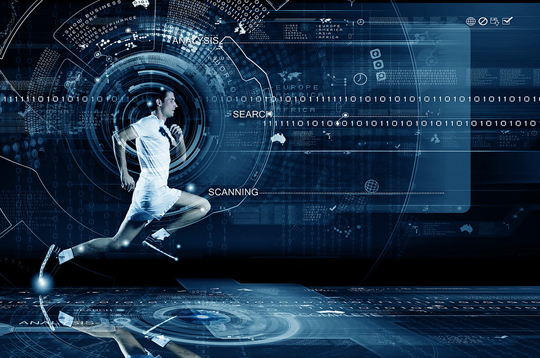 As the sports arena fell silent due to the coronavirus, a host of new sports and games sparked the curiosity of sports fans and bettors, such as esports, Belarusian soccer, Russian ping pong, Taiwanese baseball, darts and more. However, the main professional leagues and other U.S. sports have moved to free-to-play (F2P) as a way to stay engaged with fans during this unprecedented and uncertain time.

F2P is an opportunity for players to engage with games and products for fun or practice, sometimes in real time. F2P offers the same entertaining gameplay offering bonus rewards or prizes found in real-money games while allowing game producers, brands, and operators to cultivate new customers.

F2P games have been offered for a number of years and are an important part of the gaming industry. They have been mostly a smaller part of an organization’s online gaming portfolio, but have seen a strong push as both a driver and an accessory to sports betting. Many of these games have already been used by sports or media companies as a way to further engage fans in the experience, mostly from outside the venue.

However, few have figured out the secret sauce to take advantage of the fan engagement piece. Sports teams want to bring together fans both in-venue and across the country in an effort to sell more merchandise and tickets, and generate further fan affinity for the game. Media companies and sponsors of sports want fans to watch more sports broadcasting and further understand the habits of viewers to drive them to a specific product or call to action.

For sports betting operators, F2P can serve two purposes. The first is to build a database of potential sports bettors in a market where sports betting may not yet be legal, or has not yet launched. The previous daily fantasy sports operators were able to do this effectively by flipping a switch from one app into an official sports betting app in the markets where they were already operating. The second purpose is to educate those who are new to sports betting, to get them to understand how it works, and transition them into the new legal market.

Some challenges have arisen with the second purpose, which is not always the best way to attract individuals who are interested in sports betting but feel overwhelmed by the traditional user interface. There are others who want a different experience but want to actively participate. Some operators have viewed F2P as simply checking a box, hoping it will give them some interaction that builds their brand and attracts a few more people to the process. The ones who are maximizing F2P are those who can engage fans so they keep returning.

One of the keys to any gaming venture is data. The cliché that “data is king” holds true in sports betting, as in other forms of gaming and in the rewards programs that organizations have developed.

However, this has not traditionally been the case with sports betting, which has not seen a tremendous amount of development in the U.S. until recently. With the virtual legal monopoly previously held by Nevada, there was no necessity to build out the database because sports betting was, and still is, viewed as an added amenity to a casino. 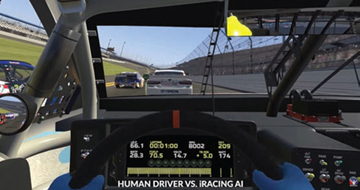 F2P now offers a solution for a sports betting operator, team, league, media company or other stakeholder to build up a database of interested players and get a treasure trove of information that can add to further engagement in the F2P or wagering worlds. In states that are looking toward legalization of sports betting, some operators have also started to use F2P as a lobbying tool to supplement a strong government affairs strategy.

As the sports betting landscape continues to change, the ways fans interact with the various games that interest them will change as well. Fans are looking for innovation not only in the game, but how they interact with it. The old saying goes that innovation is the mother of invention. The same is true of the sports betting market of the future. Today’s bettors and those in the future are looking for innovation in their experience. F2P allows operators to test various methods and innovate the experience to see what resonates with sports fans who may want to bet, if they don’t already.

Sometimes the fan is forgotten in the experience, and creating a conversation between the fan and the game through an F2P offering can ensure that the fan is kept in mind. Sports are about interaction, creating a conversation between fellow fans and opposing fans alike, and building that relationship between the fan, the team and the sport that they enjoy. By creating that dialogue, organizations can build further affinity for the game and keep the fans engaged at a higher level, whether they are in-venue, watching from the comfort of their own home, or sitting at a bar with other fans.

All of this drives the “DIC” Principle—Data, Innovation and Conversation. Those teams, leagues, media companies, big brands and sports betting operators that can perfect these three key ingredients in the sports engagement experience will be able to differentiate themselves in the market. This will likely lead to further market share gains, because they will know their players best through the innovation experience and conversations they create. The underlying data is the roadmap on how to move forward and create a further advantage in understanding their customer through engagement.

As of today, more than one-third of U.S. states are operational with legalized sports wagering, with more coming online or looking to legalize in the near term.

The flavors run the gamut, ranging from brick-and-mortar only to a mobile wagering option, or a blend of the two. Some states require on-site registration and funding, while others allow full mobile functionality with the ability to fund from the player’s own fan cave (as long as that fan cave is in a state that allows it, like New Jersey or Pennsylvania).

One consistent player acquisition strategy for gaming operators across the board is the release of F2P offerings in partnership with teams, leagues and media companies, enabling sportsbooks to cast a nationwide net, as games with no player consideration are legal in all 50 states.

These games can range anywhere from FoxBet’s Fox Sports Super 6 to the NBC Sports Predictor App, NASCAR’s Finishline, the XFL’s PlayXFL or the NBA Pick’Em games in partnership with FanDuel and BetMGM. All these games make a similar ask of the fan—to answer a group of predictive questions prior to the game (or maybe at halftime) and gain a chance to win cash and prizes by prognosticating ahead of the field.

Sports wagering pundits find that more than 70 percent of bets occur in-game. As such, it seems that the next material impact to fan engagement will be a real-time F2P user experience that delivers predictive-play questions with context and controls the timing so that players—regardless of whether they are in-venue, on their couch, or streaming the game from somewhere else—can answer questions during breaks in the action.

Fans will want to feel they are interacting with live content and enjoying a game play experience that’s additive to their viewing experience. One of the only companies delivering on this experience today is FanBeat, a company that designed its product and user experience around fan engagement and education to attract, monetize and activate the fan experience through real-time player gamification. 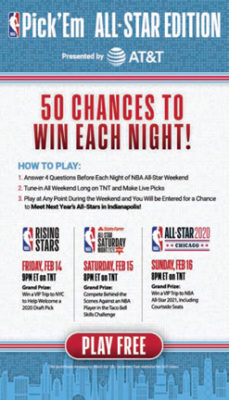 The NBA historically has been at the leading edge of fan engagement, and this year’s All-Star Weekend showcased the league’s first foray into real-time F2P gamification with “NBA Pick ‘Em: All-Star Edition, presented by AT&T.” Starting with Friday night’s Rising Stars, fans were asked one to two predictive play questions per commercial break. Players with the most points at the end of each night were awarded “money-can’t-buy” NBA experiences, such as welcoming a draft pick to the league at the 2020 NBA Draft in New York, or courtside seats to the 2021 NBA All-Star Game in Indianapolis.

The execution by TNT’s broadcast team was a key ingredient to the fan experience, prompting fans to answer the live questions posed during each event. During All-Star Saturday Night, NBA on TNT lead announcer Ernie Johnson Jr. encouraged fans to pick the winner of the Taco Bell Skills Challenge after the semifinals were set. More than 18,000 fans made predictions, with the platform processing over 1,500 submissions per second.

If real-time F2P can lead to fans consuming more of the action, it creates a groundswell of viewing so that ratings climb, enabling the media companies to charge a premium for their advertising and increasing the value of the next broadcast rights deal negotiated by the rightsholder. This type of integration between a league and its broadcast partner could be a preview of not only how real-time FTP could look in the future, but also how in-game sports betting could be provided to the fans as the partnerships between media companies and sportsbooks continue to consummate.

With the current void of live sports, major league organizations like NASCAR and companies like Callaway are using F2P to drive further engagement with their base. Several weeks after the start of the Great Shutdown, NASCAR and broadcast partner Fox launched an effort to engage fans of their iRacing series, and has been filling the gap with the season on hold. This will hopefully transition well for them, as they appear to be one of the first major sports to restart. Callaway has also taken advantage of the pause by engaging with fans during what would have been Masters Week in early April. Callaway’s MAVRIK Majors Trivia Challenge saw a 25 percent increase in the number of responses from the first live question to the last, a testament to the stickiness of the user interface.

F2P also allows operators to find a more reasonable acquisition cost per player. In a competitive market that has some operators providing several hundreds of dollars in promotional play, providing an F2P option early and continuously can bring in players at a much lower cost and build better affination with the player. Solid F2P options can come with a cost of acquisitions below $10 a player in some cases. Those that do not have a robust program can be in the same neighborhood as the promotional play of several hundreds of dollars per player and should not be considered.

Sports betting in the United States is still in its infancy. This is not a one-size-fits-all market, because gaming regulation is done and should continue to be done at the state level, one of the many justifications in the repeal of the Professional and Amateur Sports Protection Act (PASPA). This creates a unique set of circumstances for operators, as not every jurisdiction will be the same. One thing that can bridge all these markets is a strong F2P strategy to build data upon an existing sports betting database or create one in a new market to start building market share when the market eventually legalizes and launches.

The key to this strategy is to drive it with a strong engine. This includes offering an engaging product that does more than just check a box. It must be able to engage fans and keep them engaged in the same way that in-game wagering would, by captivating them for the entire contest, if they so choose.

Perfecting the process may be difficult as it continues to evolve, but there are already F2P products that are pushing the envelope to offer an unmatched experience, driving fan engagement beyond current levels. Operators that can include these products and execute on this strategy will deliver a higher-level experience and create a level of engagement in their brand, supported by the sports fans’ desire to engage with their teams, sports and contests.