Some operators who want to phase in new generations of players are looking at a growing phenomenon: competitive video games 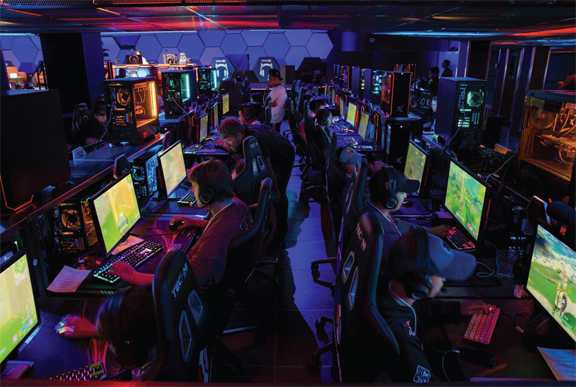 In 2015, talk show host Jimmy Kimmel famously compared esports to “going to a restaurant and having another person eat your food for you.”

The appeal of esports—basically, competitive video gaming—is usually lost on generations that didn’t grow up with it. But these days, Kimmel and others like him might not be so dismissive.

According to Jack Etienne, owner of esports team Cloud9, in 2018 the once low-profile pastime “really cracked into the mainstream.” Since then, esports has grown into a billion-dollar global industry. Nearly 100 million viewers watched last year’s League of Legends world championship, about the same number who watched Super Bowl LIV.

But do esports—in which banks of gamers hover at consoles, playing Fortnite, League of Legends, Call of Duty and other video games—have a place, niche or otherwise, in the casino environment?

Jud Hannigan says yes. Hannigan is CEO of Allied Esports, which opened the first esports arena on the Las Vegas Strip in 2018. The HyperX Esports Arena at the Luxor drew some 300,000 patrons last year and hosted 245 events, as well as 45 third-party events, such as new-game launch parties.

“The Fortnite crowd knows to come in every Friday,” says Hannigan. “The fighting-game community comes out every Wednesday. And on Saturday nights, we have our Mario Kart events,” which draw older players, some from as far away as Los Angeles, many dressed as the mustachioed Luigi. “We’re a destination not only for participation, but high-profile events that are broadcast to millions of people around the world.”

Meaningfully, he adds, esports “grab a Gen-Z and millennial demographic that’s hard to reach—people 18-35—like nothing else out there. This is all the rage in the world of sports entertainment, and this is where significant growth is coming.”

Seth Schorr was ahead of the curve, opening an esports lounge at his Downtown Grand Casino in 2016. At the time, Schorr said, “The landscape of gaming is changing, along with every other industry, because of advanced technology and consumer behavior. It’s my duty to keep Nevada relevant by changing with the times.”

Last June, Reno Mayor Hillary Schieve pushed esports for the Reno-Sparks Convention Center. “It’s one of the things that really needs to be looked at,” she said, “because this is the wave of the future.”

If you ask Menashe Kestenbaum, esports is not a coming phenomenon, but one that’s clear, present, disruptive and potentially transformational.

“Around the world, there are 2.2 billion gamers,” says Kestenbaum, founder of Enthusiast Gaming, a gaming network spanning North America and the U.K., with 900 YouTube channels that reach 150 million visitors monthly. “At least a billion are on their phones; the rest are hardcore gamers who have a TV in the living room, hooked up to a console or a PC. It is definitely worldwide at this point.”

Gaming has become “the predominant form of entertainment” for younger generations, he says, “and it will only get bigger. Right now a lot of parents don’t understand why their children get into it, but when you get to the point where the parents grew up with gaming too, imagine how easy it will be to penetrate households.”

These days, esports not only fill stadiums, but stadiums are being built just for esports. For example, Comcast Spectacor and the Cordish Companies are building a dedicated esports center, the $50 million Fusion Arena, at the South Philly Sports Complex, home of the Wells Fargo Center, Lincoln Financial Field, Citizens Bank Park and Xfinity Live! Melco Resorts & Entertainment opened the first esports venue in Macau in 2018, at Studio City, hoping to attract a younger crowd.

Enthusiast Gaming now partners with Aquilini family, owners of the Vancouver Canucks hockey team, who saw the potential after an esports tourney at the Rogers Arena sold out within four hours, hosted 90,000 fans over four days, and “set new levels of noise in the arena,” says Kestenbaum. “That’s when they acquired an Overwatch team and a Call of Duty team with us.” 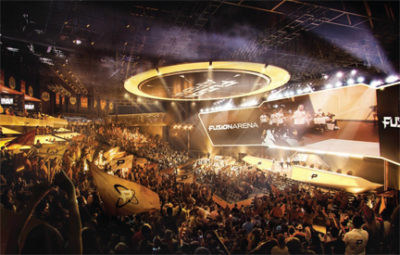 The Fusion Esports Arena is now in development in South Philadelphia’s Stadium District, a companion to the Cordish Companies’ Live! casino

If you argue that esports aren’t sports at all—it’s an easy argument to make, since the “athletes” are mostly inert, fixated on the action on-screen—big-league esports investors such as Shaquille O’Neill, Michael Jordan and Alex Rodriguez might beg to differ.

“It definitely has elements of regular sports,” insists Kestenbaum, “and elements of chess—it’s an interesting mix of strategy, fast-paced reaction time and psychology. It borrows from entertainment, imagination and sports, and blends it all together. And it’s extremely accessible, because all you need is a smartphone, computer or laptop.”

But that doesn’t mean it’s a good fit for casinos. Or does it?

Serge Vardanyan, CEO of esports company WIN, has said casinos are increasingly in search of “alternative channels” as slot customers age out. Esports, he said, “is at the top of that list.”

Vardanyan says more casinos should be dipping their toes in the water, staging esports tournaments not as one-offs but as recurring events, like bingo nights, to win loyal younger patrons.

Nir Ben Lavi agrees. The co-founder and CEO of X-Factory Holdings, described as an “innovation thought leader” in sports betting technology, calls esports “a totally new ball game, bringing a revolutionary influence to an industry that’s been developing in an evolutionary manner.”

But can gamers and gaming fans eventually be monetized—i.e., turned into gamblers?

Gavin Isaacs isn’t convinced that esports are about to take over the casino, at least not anytime soon.

“If you’re a fanatic player, I can understand why you’d get excited by it,” says the industry veteran, who is chairman of SBTech and former CEO of Scientific Games. “There are five or six fantastic video games that a lot of people in their early 20s play, and now they’re arranging themselves in teams and competing against other teams. But by definition, this is very different from casino gambling—for one thing, a very young clientele, with little disposable income.

“In years to come, as those young people get older, if that’s what they like to bet on, maybe,” says Isaacs, who pointed out that he speaks for himself, not the companies with which he’s affiliated. “But right now, it’s an evolving youth phenomenon that shouldn’t be confused with what goes on in a casino.”

“Betting with esports is not quite there yet,” Kestenbaum admits, “but it’s on a massive growth trajectory, and could probably go hand in hand with sports betting. I’m just not sure how esports could go in a setting where you have slots, blackjack and whatnot.”

In Ben Lavi’s view, there’s no time like the present to cultivate the next generation of players—and the generations that will follow. As millennials mature, he says, they will “grow to be a ‘super-power’ segment of consumers” and an important, if not essential part of the casino market.

“Millennials seem to be a totally new breed of consumers, consuming sports, esports and entertainment in a social rather than in an individual way,” he says. “They were born in an already digitized world. Screen-swiping is as natural to them as breathing, and they’re fluent in digital communication and consumption—as opposed to Generation X, which learned the digital world as adults.

“One major challenge this generation presents to the traditional casino industry is that millennials’ first choice would be to consume whatever they can digitally, rather than leave their room and screen and go to a physical location providing a specific service,” Ben Lavi says. “For traditional casinos, which built much of the customer experience on physical presence, such a change in consumption patterns is quite a challenge.

“Another characteristic of millennials is the need for instant gratification, which is more profound with them compared to Generation X, Generation Y or the baby boomers. Once technologies enter the game, we could point at new solutions that best fit real-time, seamless solutions for micro-betting on real-time sports and esports matches, such as the ones offered by Unikrn, BetBull and others.”

In other words, he suggests, casinos “that desire to stay alive and kicking will have to go digital or go obsolete.”

According to Hannigan, there are a lot of hurdles to clear for operators who want to somehow leverage esports as a gambling form to entice “the potential customer of the future.” “With PASPA coming off and sports betting becoming quite prevalent, regulations are changing. There’s a big opportunity out there, but there are some challenges to it, too, like the (esports) game publishers potentially not wanting that activity around their games, and also the regulation side getting comfortable.”

In the meantime, says Isaacs, operators lose nothing by considering esports and how they may evolve over time.

“In my view, sports betting is a much better way to attract younger customers, but if I had some free nights and a hall, why not bring in (esports)? It might bear fruit, and be a good investment for the future.”