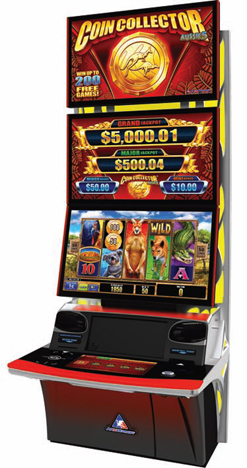 The base game is a five-reel video slot available in payline configurations of four, 25 or 50 lines. In the primary game, mystery symbols appearing on the reels all transform into the same symbol. Also, either of the two progressive jackpots—the Major resetting at $500, the Grand resetting at $5,000 in the penny version—or one of two static bonuses, $10 or $50, can be instantly awarded through a mystery “Jackpot Surprise.”

When three or more bonus symbols appear, the “Aussie 5” free-games feature is triggered. The number of free games awarded is determined by a number drawing conducted on each triggering feature symbol.

Special scatters can trigger a collect feature in which all prizes displayed on the collected scatters are won, including bonuses and jackpots. Additionally, jackpots can be won randomly during bought games.

Six or more scattered coin symbols trigger the “Dream Collector” hold-and-re-spin feature. Coin symbols each display a credit amount. Three free spins are awarded, with each coin symbol holding in place for re-spins. Each coin resets the free games to three spins. The bonus continues until no coins appear in a spin, which awards the accumulated number of credit amounts, or all 20 symbol positions fill up with coin symbols, which awards the Grand progressive plus the cumulative credit award.