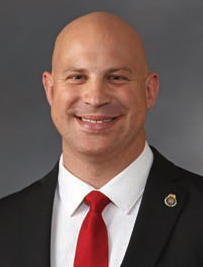 In an era when switching professions is almost standard operating practice, Anthony Strangia has never wavered from his ambition to be a lawyer.

A Middletown native who had just bought a house in Central Jersey, Strangia graduated from the College of New Jersey in 2008 with a B.S. in economics. He added a law degree from Rutgers in 2011 and settled in as an associate attorney.

In 2015, Strangia landed his dream position with the New Jersey Division of Gaming Enforcement.

“Gaming was a growing industry around the country, and New Jersey had recently legalized internet gaming, and it seemed like an exciting field to work in,” he says.

“Former Deputy Director George Rover hired me to work in the Service Industry Licensing Bureau, where I still work today,” he says.

A deputy attorney general, Strangia licenses individuals and entities that do business with Atlantic City casinos and their internet gaming and sportsbook partners.

“The great thing is you get to work on so many different cases that your job never gets stale,” he says.

Strangia combats illegal internet gaming and sports betting offered by offshore websites that operate without a license. Much of the effort identifies and addresses internet marketing affiliates that promote these websites.

“I’ve reviewed tens of thousands of emails in separate cases that have resulted in the disqualification of entities due to their association with illegal internet gaming operations,” he says. “On one of those reviews, I managed to find the proverbial ‘needle in a haystack’ smoking gun email that we were able to confront an individual… that ultimately resulted in his termination.”

He also worked on cases with several large companies to enlist their assistance in disrupting illegal gaming operations.

“I’ve negotiated with a sovereign tribal entity to shut off a pathway for illegal internet gaming sites being transmitted into the U.S.,” says Strangia, whose favorite activity is spending time with his wife Jenny.

With the growing popularity of sports wagering, Strangia has had the opportunity to license and work with a number of high-profile individuals that have been entering endorsement deals with sportsbooks or making appearances at casinos.

“I even got to take the sworn interview of a billionaire or two. Gaming is full of surprises,” he says.

One of those surprises was the coronavirus pandemic, which forced lawyers to work from home. Both the DGE and the Attorney General’s Office made sure the team had all the necessary tools.

“I’m very fortunate that I can perform the bulk of my work from my living room. But I miss seeing my co-workers and the hustle and bustle of the office,” says Strangia, a motorcycle enthusiast who drives a 2005 Harley-Davidson Softail Deluxe.

And there is no shortage of work, given the growth in New Jersey’s internet gaming industry.

Rover was one of Strangia’s key mentors when he joined the DGE. He also gives kudos to Judge Travis L. Francis, who he clerked for, as well as Ralph Lamparello, managing partner at his first law firm.

The casino industry is a fertile ground for lawyers, and Strangia says young legal minds should join.

“I’ve practiced other areas of the law, including litigation, and gaming is a growing industry that’s both expanding rapidly and constantly innovating, and you never know what is going to come across your desk next,” Strangia says.