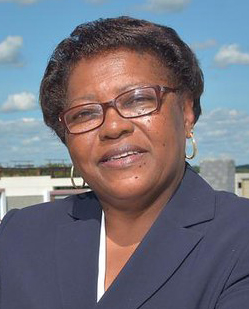 When you grow up in Atlantic City, where casino resorts are the key industry, you might want to live and work somewhere else. Mary Cheeks did just that.

She earned a bachelor of science in accounting at the College of New Jersey in Trenton. She interned and then worked as a field auditor revenue agent for the IRS in Newark and Trenton. But she wanted a bigger challenge.

“I have always worked at a faster pace than most, and I needed a change,” Cheeks says.

She pondered her next move. Cheeks’ mom put in her recommendation.

“My mother really wanted me to move back home and often talked about the casinos in Atlantic City,” she says.

These talks failed to impress. Cheeks had little understanding on what the casino business entailed. It wasn’t just her. A lot of execs from other industries frowned at the idea of working in a casino hotel. Cheeks hemmed and hawed and hesitated. Then she gave in and took a job as a supervisor in internal audit at Resorts International Casino.

“I fell in love with the industry,” Cheeks says. “What fascinated me was a business with so many different operations—so much to learn and master.”

And she did. She went from Resorts to Caesars Entertainment where she served as regional chief financial officer of Harrah’s Atlantic City and Showboat Casino. She had a pivotal role in transforming these properties into a couple of the most profitable gaming establishments in Atlantic City.

Almost 10 years passed, and Cheeks was ready for a new challenge. She moved on but she did so with a lot more knowledge.

“My experience in Atlantic City taught me how to compete in an ultra-competitive market with 12 casinos (now nine) all within walking distance of my home,” Cheeks says. “Also, I learned how to operate in hard times versus great times once regional casinos began operating in neighboring states to New Jersey. Most important to my career, I learned every operation within the casino that prepared me for where I am today.”

In July 2010, Cheeks left Atlantic City to become CFO and senior vice president of Rush Street Gaming’s Pennsylvania operations. For five years she oversaw Rivers Casino Pittsburgh and SugarHouse Casino Philadelphia. She got a promotion to general manager of Rivers Casino & Resort in Schenectady, New York. After some two-and-a-half years Cheeks welcomed another promotion in 2018 to Jamul Casino outside of San Diego, the newest casino in Southern California, as president and general manager.

Cheeks was initially tasked with helping lead the team through an ownership transition and rebranding. In a few short months, she had recruited a world-class management team, optimized the skills of existing team members and supplemented with additional talent.

That wasn’t all. Cheeks guided Jamul through the Covid-19 pandemic.

“Covid has touched everyone personally or through family and friends,” she says. “It put the executive team and me in a place where personal and business decisions had to be made during an uncertain and unprecedented time. The onset of Covid made it difficult for me to stay connected with my loved ones (coming from the East Coast), not being able to travel for close to a year, in addition to closing the casino for two months.”

Covid qualifies as an obstacle to be overcome in any business. But not the only obstacle Cheeks has to deal with in the future. “I was raised by parents who taught me at an early age that obstacles are opportunities, and to never let them get in the way. As a result, I took on each challenge as a goal to conquer—and I did so most of the time.”

Cheeks has worked with some great leaders who kept her on her A game.

“My current boss, Erica Pinto, chairwoman of Jamul Indian Village, and the tribal council, entrust me to run their casino. As a group with a great executive team, we have made extraordinary accomplishments,” she says.

In all these years, the key change since she began her climb in the casino business has been technology. “We operate so much smarter and more efficiently in today’s gaming and non-gaming space.”

In her long career, Cheeks has learned a lot. If she could talk with younger Mary Cheeks and give her some advice it would be:

“Don’t work so hard. Enjoy life; it is often too short,” she says. “Also find balance in life. Don’t let important occasions pass by that you later regret.”