How will gambling on your device or the casino’s device impact the true gaming resort experience? 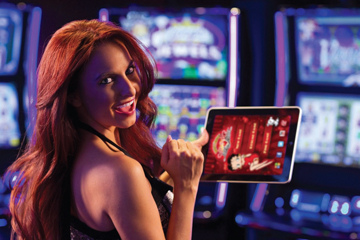 In 1971, the Who’s Pete Townshend—not Roger Daltrey—sang about “Going Mobile.” Some 46 years, later the casino industry appears to finally be ready to join him.

The entire millennial generation is now over the age of 21, and casinos are trying to figure out how they can reach these potential customers that have so far vexed their marketing departments.

The answer is likely in your pocket right now.

These are customers whose formative years revolved around a small mobile device that performs virtually every service imaginable, from communication to information to entertainment. Millennials are reliant on mobile phones (aren’t we all at this point?) and casinos are hoping these mobile devices will be a conduit between millennials and their properties.

But it wasn’t always this way…

Try as they might, the casino industry couldn’t beat back online gambling. Ultimately, casinos came to the realization that the toothpaste wasn’t going back in the tube. After two decades of fearing the online gambling industry, the land-based casino industry eventually accepted the existence of the online gaming industry. As time wore on, and the cannibalism fears were laid to rest, casinos began to view online gambling as beneficial to their own interests and embraced online gaming. However, a few stragglers are still trying to put the toothpaste back in the tube.

As they attempt to reach out to millennials, casinos are now turning to the industry they once attempted to censure and tear down.

Land-based casinos are now integrating different forms of online gaming into their suite of offerings, and as people become more reliant on the super-computers we all carry in our pockets, mobile gaming has become a top priority for casinos.

The importance of developing mobile gaming products and platforms cannot be overstated.

According to eMarketer’s U.S. Digital Users: Q1 2015 Complete Forecast, 106 million play on desktop or laptops, whereas 134 million people played mobile games in the United States over the course of 2015.

According to eMarketer’s analysis, the number of mobile gaming users in the United States is expected to increase to 185 million by 2019.

Less than a decade after it became a viable product (the Apple iPhone store launched in 2008), mobile has supplanted desktops and laptops as the No. 1 choice for online gamers.

The Many Hats of Mobile Gaming

Forward-thinking casinos have been integrating mobile gaming products for several years, and these early converts quickly discovered mobile gaming isn’t a singular product with a singular use. What they found was mobile can be unleashed in a variety of ways, each reaping its own benefits for the casino.

Newcomers to mobile are often surprised at the scope of products available and their many uses.

A casino can use mobile as an extension of existing product already offered in the casino, such as placing wagers through a casino’s sports betting app. In this sense, mobile allows the casino to offer their customers more ways, and more convenient ways to wager on- or off-property.

Cut off from sports betting and real-money online gambling, most casinos have found another way to use mobile to their advantage.

Casinos across the United States, big and small, tribal and commercial, have launched branded social gaming sites. Most have also taken the next logical step, as they’re increasingly becoming dual-platform, available as a desktop application or on mobile devices.

Social casinos allow existing customers to log on and continue playing their favorite games in a free-to-play online environment, often receiving land-based rewards for their online play. This allows casinos to gain greater insight into the playing habits of their customers and keep them engaged after they leave the property.

Social casinos have also proven to be an effective way to reach new customers, allowing timid players a chance to learn the mechanics of different games from the privacy of their homes before heading to a casino, with real money in their pockets.

A social casino is as important as a casino’s rewards program. It’s the foundation of a casino’s online offerings, and in 2017, that means offering a social casino available on both desktop and mobile platforms.

Penn National Gaming, a commercial casino corporation that runs 20 land-based casinos, was a late arrival to the social casino scene, first launching a social casino site at the tail end of 2015.

On the other hand, Foxwoods was an earlier adopter of social gaming—the tribal casino located in Connecticut launched a social site in May 2014.

Despite their different approaches, both casinos have been very pleased with the results of their social casinos.

Penn National was so impressed with the early returns they purchased social casino company Rocket Games for $60 million in August 2016, with an eye towards launching a mobile platform.

Penn National Gaming President and CEO Timothy J. Wilmott said at the time that the early performance of its social casino led to the acquisition of Rocket Games.

“Launched last year, Penn National’s Hollywoodcasino.com and Hollywoodslots.com social casino offerings have been very well-received by players, are profitable and serve as effective customer acquisition tools for our operations,” Wilmott said in a press release.

In addition to social’s worth as an acquisition tool, casinos like Penn National and Foxwoods are discovering brick-and-mortar customers like to play social casino games online.

Internal research conducted by IGT’s DoubleDown Interactive, one of the largest social casino providers in the world, supports Foxwoods’ and Penn National’s findings.

According to data from IGT, 88 percent of DoubleDown’s social casino users visit a land-based casino at least twice a year.

“Based on our internal analysis, a significant segment of Penn National’s database customers actively participate in social and online gaming, and we believe there are meaningful operating and revenue synergies between Penn National’s operations, our Hollywoodcasino.com and Hollywoodslots.com social casino offerings and Rocket’s operations that will drive near- and long-term growth for our shareholders,” Wilmott said.

Foxwoods Resort Casino has come to the same conclusions about its social casino, FoxwoodsOnline, which is available as a mobile app or through a traditional desktop platform.

According to Seth Young, director of online gambling at Foxwoods, “We are seeing an increased level of engagement at Foxwoods Resort Casino from guests that are also enjoying FoxwoodsOnline, and this is data that we continue to analyze as our online gaming program matures.”

Young goes on to explain how Foxwoods incorporates the free-to-play FoxwoodsOnline games with its land-based rewards program.

“In addition to providing a fun way for our guests to enjoy their favorite Foxwoods games when they are not on the property, FoxwoodsOnline players may earn real Foxwoods rewards, including bingo vouchers, gas cards, free bets and more, through the FoxwoodsOnline loyalty program,” Young says.

This integration leads to three favorable outcomes for the casino:

Online players must be enrolled in Foxwoods rewards program to receive rewards; Foxwoods is able to track their player patterns and personalize offers and promotions; and, Players can earn rewards online, but these rewards must be redeemed at Foxwoods.

Penn National is also planning on linking its land-based rewards program with its social and mobile casinos.

“After our customers visit any of our 20 land-based casinos, we want them to have the option of continuing the fun of playing our exciting play-for-fun social slot games from the comfort of their own homes,” Chris Sheffield, senior vice president and managing director of iGaming at Penn National, said in a press release announcing the acquisition of Rocket Games. “In addition, with Hollywood Classic Slots, we have plans to incorporate our loyalty program, Marquee Rewards, so customers can earn rewards to use at their favorite casino.”

Bottom line: There is significant crossover between social/mobile casino users and brick-and-mortar patrons, and multiple ways for land-based casinos to increase visitation through social gaming websites, which are rapidly shifting towards mobile platforms.

Tip of The Iceberg

A social casino may be the bedrock of a casino’s online offerings, but in 2017, with mobile technology advancing at an incredible clip—parts of this article will probably be outdated by the time it goes to print—casinos are only limited by their imagination.

As stated by Young, whose background is in the daily fantasy sports industry, “There are many exciting ways that FoxwoodsOnline can be integrated with the Foxwoods Resort Casino experience, and we are just beginning to scratch the surface of its potential.

“We are actively working on new and innovative ways to grow our online gaming program both on and off property, and view the opportunities as significant.”

And when it comes to mobile gaming options, casinos have plenty of cutting-edge products.

New fast-paced online poker products are being designed specifically with mobile users in mind. There’s PokerStars’ Zoom Poker tables, where players are instantly moved to a new seat the moment they fold their hand.

PokerStars and several other online poker providers also offer lottery-style Spin & Go tournaments that randomly apply a prize-pool multiplier, which at PokerStars ranges from 2X to 12,000X, the buy-in of the three-person tournaments.

Several casinos are also delving into the world of virtual sports.

Virtual sports are computer-generated matches or contests that allow viewers to wager on the outcome. Golden Nugget and Resorts in Atlantic City have plans to launch on-property virtual sports this year, and Pala Interactive has added virtual sports to the tribe’s social casino platform, which happens to be available on mobile devices.

And expect even more mobile innovation down the road.

One company that is sitting at the intersection of two dynamic verticals that have captured the attention of the casino industry, eSports and mobile gaming, is a company called Leet.

Leet’s focus is to provide an eSports tournament platform for casinos that was “built from the ground up with casinos in mind,” according to Leet co-founder Kingsley Edwards. But the tournament platform, which has in-game analytics and other features, is only one of Leet’s products.

One of the products in Leet’s pipeline is an auto-generated, in-game eSports bingo card.

The cards would be made available to attendees (likely through a mobile device) at eSports tournaments. Where it gets innovative is, instead of letters and numbers, Leet’s eSports bingo cards use in-game events—a head shot, knife kill, or bomb diffuse for Counterstrike or a fumble, interception, or rushing touchdown for Madden.

The products to attract millennials are out there. Now, it’s time for the casino industry to follow Townshend’s lead and go mobile.