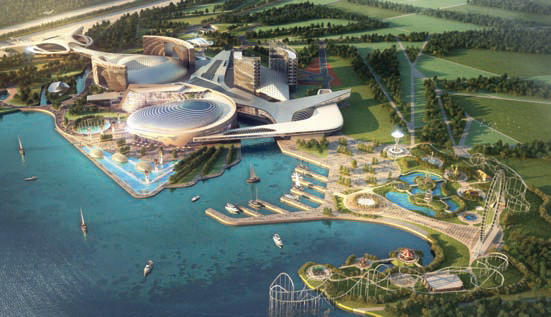 American Indian tribes are increasingly looking to commercial casino opportunities in North America and overseas in their effort to grow a tribal government gambling industry that consists of some 500 facilities in 29 states.

Hard Rock International, a multibillion-dollar enterprise of the Seminole Tribe of Florida, is taking a leadership role, pursuing projects in Japan, Costa Rica and Spain. Its worldwide ventures include the former Trump Taj Mahal in Atlantic City.

Mohegan Gaming & Entertainment, an enterprise of the Mohegan Tribe of Connecticut, hopes to add a South Korea gambling resort to the list of casinos and racetracks it owns or manages in Atlantic City, Pennsylvania, Connecticut, Louisiana and Washington.

And Wind Creek Hospitality, a division of the Poarch Band of Creek Indians of Alabama, is putting together a $1.3 billion deal to acquire the Sands Resort and Casino in Pennsylvania. The tribe operates several gambling and hotel facilities in the Southeast and the Caribbean.

The commercial ventures are a natural extension of a tribal gambling industry that exploded with passage in 1988 of the Indian Gaming Regulatory Act (IGRA), which dovetailed a U.S. Supreme Court ruling recognizing the sovereign right of tribes to operate gambling on Indian lands.

“Tribes have been in gaming long enough, they know the business,” says economist Alan Meister, author of the annual Indian Gaming Industry Report. “They have the confidence and many have the capital.”

The American Indian casino market dominates gambling in North America, growing at a faster rate than the commercial casino and racetrack, or “racino,” segments of the legal gambling industry, according to Meister’s report.

Gaming revenue in the 17 states with commercial casinos rose 1 percent in 2016 to $30 billion, Meister says. Meanwhile, racinos in 15 states grew 2 percent to $8.7 billion. Unlike commercial casinos, slots and table games at dog and horse tracks are largely a method used by the parimutuel industry to generate increased purses.

“Indian gaming will remain the largest segment for some time. It’s growing at a healthy rate.”

“The consistent growth of the Indian gaming industry year after year shows how well tribes run and regulate complicated operations,” the NIGC said in a press release.

With the maturity and growing saturation of the largely rural Indian gambling market, it comes as no surprise tribes would utilize their expertise in acquiring and/or managing commercial and tribal casinos off their reservations.

For some tribes, the goal is to achieve regional diversification of their gambling and hospitality enterprises while discouraging increasing competition from commercial casino companies.

“That’s appealing because tribes typically operate on their own land and in many circumstances the land is rural,” Meister says. “It’s not the ideal location.

“Having a facility in a metropolitan area puts you in a bigger, nicer market. That’s the positive.”

Getting state and local approvals for commercial casinos is often quicker than the lengthy, risky and politically onerous process under IGRA, particularly when a project involves placing newly acquired land in federal trust.

The downside of off-reservation commercial investments is the relinquishing of tax and regulatory benefits associated with operating as a government business enterprise.

In addition, tribes moving off Indian lands are often confronted with increased competition.

“That’s the potential negative,” Meister says. “Going off the reservation means you lose the rights tribes have as sovereign nations, including tax exemptions and regulatory issues.

Eleven of the more lucrative tribes with casinos have joined the American Gaming Association, the commercial industry’s trade association and lobby. Some joined the group to monitor issues such as sports wagering, others to seek out commercial casino ventures.

“Gaming is still a very significant, important part of tribal economies,” says Kristi Jackson, chairwoman of TFA Capital Partners. “Looking forward, though, the conversation we have with just about all our tribal clients is how they can grow beyond gaming.

“There is a need in most cases to look beyond the boundaries of the reservation and do things that will diversify the economy.

“An absolute trend is the diversification away from home-based gaming. Some tribes are looking at geographical diversification. They are looking to do gaming outside of the reservation boundaries to mitigate economic or competitive issues.”