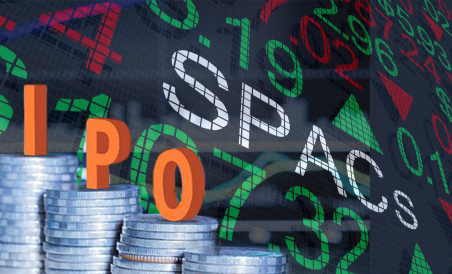 Since around 2019, there has been an increasing number of gaming companies combining with special-purpose acquisition companies (SPACs) to expeditiously go public and acquire an additional form of currency—public equities—to fund new growth opportunities.

It is important to note that SPACs have existed since the early 1990s, but for a variety of reasons, they did not gain favor within the gaming industry until recently. SPAC issuance thus far in 2021 exceeds the prior year, as privately held, high-growth industries appreciate the SPAC as a more cost-effective and less time-intensive process to go public than the traditional initial public offering (IPO) route.

Since the end of 2019, there have been several examples of gaming companies using SPACs to go public instead of doing an IPO. The most notable of these was DraftKings, which went public roughly a year ago and has been one of the best-performing stocks during this time period. Other reported SPACs that appear on the horizon include Sportradar, reportedly valued as high as $10 billion.

While most of the focus has been on sports betting and online gaming and their associated suppliers, SPACs have been used for land-based opportunities as well. One of the most recent of these transactions was the creation of Gaming & Hospitality Acquisition Company (GHAC), which was sponsored by Affinity Gaming.

For those unfamiliar, a SPAC has raised proceeds through a public offering, but does not have current operations of its own. Instead, the SPAC has 18 months to agree to acquire a company and 24 months to complete the acquisition. Based on available information, there are believed to currently be approximately 430 SPACs that have completed their IPO but have not yet announced an acquisition. In other words, there are 430 SPACs searching for a target to acquire.

For the year to date ended March 31, 2021, approximately 297 SPACs have completed their IPO, raising over $97 billion in proceeds. For comparative purposes, there was a record 248 SPAC IPOs with $83 billion in proceeds for the entire year 2020. Thus, through one quarter of 2021, the number of SPAC IPOs and proceeds has exceeded all of 2020. In fact, the 2021 YTD SPAC issuance has exceeded the number of IPOs and proceeds for the 11 years from 2009 through 2019 combined. 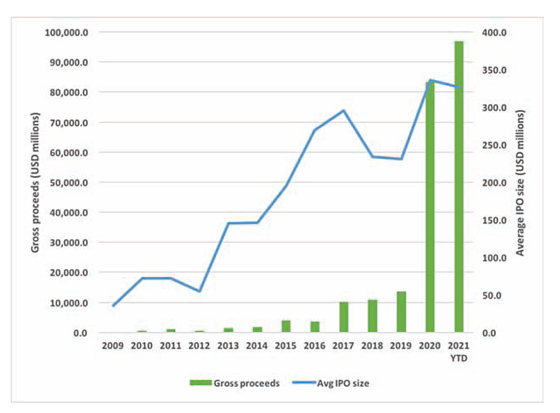 In a gaming blog post on SPACs in August, we highlighted that a SPAC has not identified, or begun discussions with, its acquisition target at the time of its IPO. If it had done so, the SPAC must disclose the target in its Form S-1 initial registration form. Other items to consider during the IPO process include the following:

100 percent of the IPO proceeds are placed into a trust account. The trust funds cannot be disbursed until either i) an M&A transaction is completed; or ii) the SPAC is dissolved and the public shares are redeemed if the SPAC does not complete a transaction in the appropriate time frame.

The fair value of the target must be equal to at least 80 percent of the cash in the SPAC trust fund.

At the time of the IPO the sponsor commits to voting its founder shares, as well as subsequent purchases of public shares, in favor of the transaction.

As noted above, the SPAC must announce and complete a transaction within a specified time frame, typically 24 months. If no transaction is identified and consummated, one of two things will occur: all public shares are redeemed on a pro rata basis for the cash remaining in the trust fund; or, the sponsors can request a shareholders’ vote to extend the deadline.

In terms of process, after an acquisition has been announced, the SPAC will file the required information disclosures, including three years of audited financial statements plus unaudited interim financial statements. After the SEC has completed its review and signed off on the documents, the SPAC sets a date for a mandatory shareholder vote to approve the transaction or redeem the shares for a pro rata portion of the trust proceeds.

While SPACs have been around since the early 1990s, they have typically not been active in the gaming industry. This is true for myriad reasons, but two reasons, in particular, are highlighted, because they are the most important reasons SPACs have not acquired gaming companies. Further, these reasons stress why SPACs have become increasingly more interested in the gaming industry in the present times due to certain structural changes to the industry.

Primarily, the regulatory requirements of the gaming industry, notably the investigation and obtaining of gaming licenses in each jurisdiction in which the company operates, has kept many SPACs away from the industry. This is especially true for some of the slot machine manufacturers and large casino operators that are licensed in a large number of jurisdictions. As it relates to the slot machine manufacturers, some of the larger companies have over 300 international, domestic and Native American gaming licenses.

Likewise, some of the smaller, privately held slot manufacturers with a niche focus or capacity constraints can have over 100 gaming licenses. This total includes each Native American tribe as they investigate and license the company, its executives and large shareholders. These investigations can take significant time to complete; it would be longer when there are a large number of jurisdictions conducting the investigations.

For example, Penn National Gaming agreed to acquire Argosy Gaming in November 2004 with the acquisition closing nearly one year later in October 2005. Even more recently, Twin River Holdings announced the acquisition of two casinos (Isle Kansas City and Lady Luck Vicksburg) from Eldorado Resorts in July 2019 and completed the transaction in July 2020. This time frame necessary to obtain the regulatory approvals would have been inconsistent with the time frame to complete a SPAC transaction, and would have necessitated the additional expense and risk of a shareholder vote to approve the delay.

Additionally, the brick-and-mortar legacy gaming industry is in the mature phase of its industry life cycle with declining margins and consolidation. Thus, this segment is, in our opinion, unattractive to most SPAC issuers and investors. However, there have been two significant changes to the gaming industry that have created a new vertical in the U.S. with substantial growth potential and, by extension, returns for investors.

In 2018, the Supreme Court of the United States (SCOTUS) overturned the Professional and Amateur Sports Protection Act. This was in addition to the 2011 reinterpretation of the Wire Act by the Justice Department under President Barack Obama. The 2018 SCOTUS opinion enabled sports betting to become legal in all 50 states. The Obama-era Wire Act interpretation made it possible to create the intrastate real-money gaming industry, i.e. online casinos, poker and/or lottery.

The importance of these two decisions has been the evolution of a high-growth industry in the infancy stage of its development. But, because online gaming and sports betting have been legalized in only a handful of states, it substantially reduced the number of jurisdictions in which the new owners need to get licensed, thereby reducing the friction cost for a SPAC to make an acquisition in the gaming industry. This has led to several companies going public via the SPAC route.

One aspect of an acquisition of a company by a SPAC relative to pursuing the traditional IPO route is in terms of control or influence. As noted above, the SPAC “founders” own around 20 percent of the public company and are usually the largest shareholder of the new company. Meanwhile, in an IPO, the company founder likely, but not always, remains the largest shareholder of the company. Thus, some company founders are reluctant to sell to a SPAC because of a fear of losing control of operational and strategic decisions, and the SPAC, recognizing the importance of retaining the founder’s vision and drive, seeks to incentivize the owner’s continued involvement and motivation.

As has been seen in the gaming industry, SPACs employ certain strategies to mitigate the concerns of the company founder as it relates to loss of control. In particular, many company founders have negotiated a dual-class equity structure with Class B—super-voting—shares issued to the company founder. These Class B shares are exchangeable on a one-for-one basis into Class A shares of the company with forced conversions based on achieving certain benchmarks.

For example, Skillz CEO Andrew Paradise received Class B shares as consideration in that company’s merger with Flying Eagle Acquisition Corp., entitling him to 20 votes per share, effectively giving Paradise over 80 percent of the voting power of Skillz shareholders. It should be noted, the super-voting dual-class structure previously existed at Skillz. However, under the previous structure, the Class B shares entitled Paradise to 10 votes per share. Additionally, Jason Robins, CEO of DraftKings, was issued Class B shares with 10 votes per share. Far less frequently, because it affects the return decision of the SPAC owners, some owners have agreed to forfeit some of the founder shares.

Many of the SPAC-gaming industry combinations, from a stock market performance perspective, have outperformed the S&P 500 benchmark index. Notably, each of the combinations involving real-money online gaming or sports betting companies has exceeded the benchmark. Meanwhile, the two combinations that have underperformed the benchmark were involved in brick-and-mortar retail gaming or free-to-play social casinos. Arguably, the combination of real-money, online gaming companies and SPACs has been effective, thus far, in realizing the goal of creating a publicly traded gaming company. In turn, this has been delivering economic returns to SPAC and company founders, as well as the public shareholders.

This is likely only the beginning of SPACs being used in the gaming sector. With rumors of additional SPACs on the horizon to take other online, sports betting, land-based and other affiliated companies to the market space, it provides a vehicle to raise additional capital, raise the profile of the entity, and deliver returns to those involved.

Gaming is just beginning to see the rewards of this vehicle, while other industries have been using it for some time. It highlights how gaming has become both more Main Street and Wall Street in our economy.