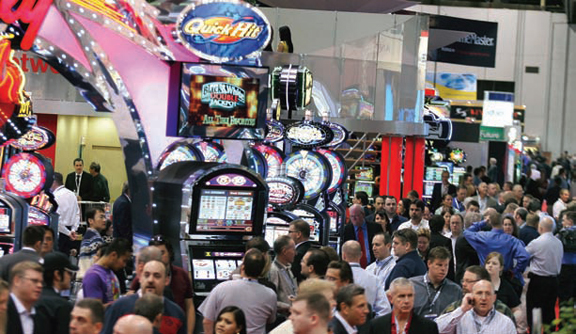 Along with the broader lodging and leisure industry, the Covid-19 crisis has changed the gaming industry, in some ways forever.

While regional markets are in recovery mode, the impacts have been deeper in resort destinations like Las Vegas. Reliant on a steady influx of travelers from across the country and beyond, Las Vegas’ woes are no better evidenced than by air traffic counts through McCarran International Airport, which are hovering at around 25 percent of 2019 levels at the time of this writing.

Gaming trends have been well covered, but the effects of the coronavirus on important destination amenities like meetings and conventions are more nuanced. Las Vegas is no doubt a gaming town, but it is also a convention town. And no industry has proven more vulnerable to the pandemic than live events, a broad umbrella that includes concerts, weddings, conventions and trade shows. And no industry is subject to greater uncertainty regarding the timing and scope of recovery. 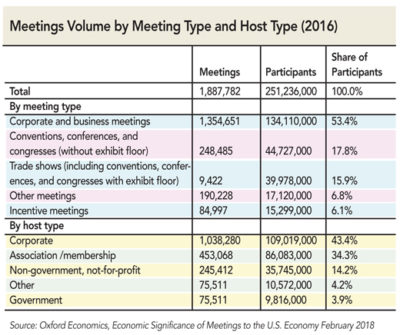 Given the broad economic activity engendered by conventions and trade shows, it’s challenging to quantify the industry’s impact on jobs and GDP. Most jobs supported by the industry occur in other sectors, including restaurants, off-site entertainment and recreation facilities, transportation, lodging, retail and management and employment services.

A profile of the 2016 U.S. meetings industry was conducted by Oxford Economics in 2018. While this study only captured a portion of the value of the events industry to the U.S. economy—it excluded social events (e.g., weddings), school events, concerts and recreational events, political events and consumer shows—Oxford nonetheless estimated that in 2016, nearly 1.9 million meetings were held, with more than 251 million combined participants, including both attendees and exhibitors. 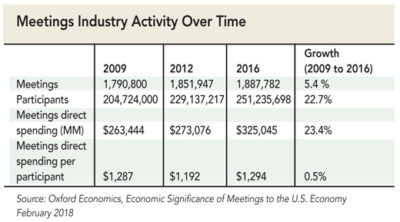 Adding consumer shows into this discussion, leveraging data from the Center for Exhibition Industry Research (CEIR), recent analysis by The Innovation Group estimates that combined direct spending was $397 billion in 2019, with support for roughly 4 million jobs and a $238 billion contribution to GDP.

This is to say nothing of the catalytic effects conventions and meetings provide, lubricating the wheels of commerce. It’s difficult to estimate the impact of meetings on intra-industry commerce (2020 will provide an interesting case study), but recent surveys of executives indicate that nearly 100 percent believe the face-to-face meetings as facilitated by conventions provide an ROI.

Importance to Gaming and Hospitality

The interplay and synergy between the convention industry and casino gaming is extensive. Particularly in cities such as Las Vegas, with its heavy reliance on tourism, conventions and meetings extend the usual travel season and provide meaningful occupancy midweek, at a time when it is difficult to fill rooms with casino guests.

From a development standpoint, hotels and their expansions often rely on convention business to become financially viable. To put this in context, group room revenue—that is, hotel revenue associated with group room blocks—reached $41.7 billion in 2019, and not all convention attendees book into the hotel as part of a room block. According to Smith Travel, group business accounts for approximately one-quarter of total hotel room night demand in the U.S.

The hotel, however, is not the only area of the business that depends on conventions and meetings to thrive. Convention visitors provide considerable cash revenue to food and beverage outlets, businesses that can have slim margins to begin with, and which largely service comp guests. 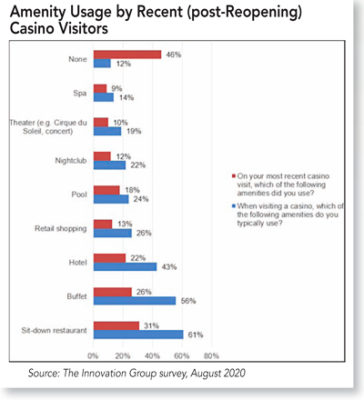 Regional markets are considerably different than destination markets in this regard. Regional markets have smaller convention centers and fewer hotel rooms and other amenities. To emphasize this point, regional gaming companies can see upwards of 90 percent of their gross revenue from gaming. The Las Vegas Strip, by comparison, only derives around 45 percent of its revenue from gaming. The cancellation of nearly all meetings and events due to Covid-19 has had significant effects on Las Vegas and other convention-heavy destinations, including Orlando, Phoenix, New York, Los Angeles and San Francisco.

While amenity usage is low across the board—recent consumer research conducted by The Innovation Group shows that hotel and food and beverage usage are especially impacted—regional markets are less dependent on amenities. We see gaming revenues recovering in regional markets, particularly due to recovery in the highest frequency segments of casino guests, while we expect a much longer runway for destination casinos.

On the other hand, as guests become willing to travel to destination markets, their attitudes toward amenity safety may soften as well, allowing for a more seamless recovery.

As discussed earlier, the contribution of this commerce extends far beyond registration and travel. The revenue supports jobs, not only in the convention centers but in the broader community, whose restaurants, shops and other attractions benefit from the influx of visitors. Multiplier effects of this business and employment income are realized as those dollars cycle and ripple through the broader economy. 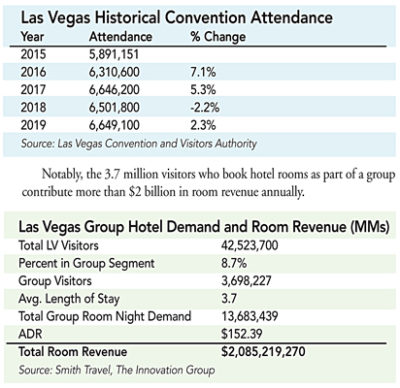 Las Vegas is one of the world’s top meeting and convention destinations. With 10.8 million square feet of meeting and event space, more than 150,000 hotel rooms and myriad entertainment options, it’s no surprise that Las Vegas welcomes more than 6.6 million convention-goers among its more than 40 million visitors annually.

Notably, the 3.7 million visitors who book hotel rooms as part of a group contribute more than $2 billion in room revenue annually.

The Las Vegas Convention Center alone hosts more than 90 events per year, its renewed efforts and strategic plan contributing to more than 17 percent growth in 2019 versus 2018.

Analysis The Innovation Group performed earlier this year suggests that the meetings industry had a total impact on the Las Vegas economy of more than $28 billion in 2019. It had a total (including multiplier effects) impact of more than 251,000 jobs and $17.4 billion in GDP—this in a metro area with a GDP just over $120 billion and a population just over 2 million.

However, Las Vegas reported 18 percent unemployment in June 2020 after more than 25 percent in May. Here we can see the economic damage caused by having casinos and conventions not operating, as the job loss was not only in casinos and convention centers, but percolated more broadly throughout the metropolitan area.

While many conventions are nominally rescheduling for 2021, the Las Vegas Convention and Visitors Authority has slashed its budget for the next fiscal year by more than one-third in anticipation of a slow recovery. Gaming companies are experiencing broad-based and permanent layoffs and closures.

The structure of the industry presents unique challenges for restarting in a Covid-19 environment, especially with the pandemic’s uncertain trajectory in the U.S. The industry is complex in the best of times, with interdependent factors among stakeholders.

Meeting organizers depend upon the expectation of a critical mass of attendees and buyers to underwrite a platform in which exhibitors, or sellers, participate; sponsors contribute to the bottom line; and venues are secured as hosts.

The current Covid environment injects substantial instability into this planning process, not only in bringing personal safety to the forefront, but also considerations of content, format, location and venue. A further challenge is the timing and logistics involved in making this work, since events are typically planned years in advance.

Event planners and suppliers have grown increasingly pessimistic as the virus has spread. They can be forgiven for their springtime optimism in rescheduling March and April events for September and October. But at this point, even spring 2021 events are not certain.

The Professional Convention Management Association, or PCMA, has conducted surveys throughout the pandemic to understand how planners and suppliers are thinking over the coming months and after the pandemic passes. The July 13-16 survey showed that 41 percent of planners and 27 percent of suppliers would not travel to an event in the absence of a therapeutic treatment or Covid-19 vaccine.

Planners are adapting to the new socially distant normal by shifting existing face-to-face events to a digital platform. Fifty-three percent of planners are moving their entire programs online over the next three months, 26 percent are adding a digital component to their events, and 21 percent are not redesigning their programs to digital platform. There are diverse opinions on how face-to-face meetings for the business events industry will recover in their geographic region.

About a third of respondents (33 percent) anticipate smaller local and regional events to thrive before national and international groups gather. Twenty-seven percent think small in-person events will be hybrid, with events having a digital version for a larger audience. Nineteen percent believe there will be pent-up demand for all groups to meet face-to-face, but 14 percent are of the belief that people will be hesitant to travel to meet in person. Seven percent responded “other” as to how in-person meetings will recover, believing that no matter how it happens, there will always be a need for a digital component.

Suppliers also have varying thoughts on how face-to-face meetings for the business events industry will recover. Most respondents (55 percent) believe smaller local and regional events will thrive before national and international groups gather. Sixteen percent predict that small, in-person events will be hybrid, with a digital version for a larger audience. Fourteen percent anticipate pent-up demand for all groups to meet face-to-face; on the other hand, 12 percent expect people to be hesitant to travel to meet face-to-face.

One respondent said it’s “all conjecture and guesses” at this time, and another stated that the “global economic crisis will shorten the demand.”

Looking forward, suppliers are generally more pessimistic than planners in the short term on the overall revenue impact of Covid-19 on events-related business. For 2021, both suppliers and planners have similar expectations on the pandemic’s revenue impact.

Of the planners that responded:

Of the suppliers that responded:

Many expressed budget uncertainty. Some are unsure how to charge virtual attendees for hybrid events that have in-person and digital components, or for live events that have to transition to a completely digital platform.

When planners were asked to identify their biggest financial challenge planning a business event in 2021:

The Innovation Group also conducted a series of industry interviews to gain insight into independent and overlapping perspectives of venue managers, organizers and attendees. The following themes were prevalent:

It has become increasingly apparent that the industry will not experience a material recovery until, at best, Covid-19 trends have been consistently brought down to manageable levels. A fuller recovery is not likely until the successful implementation of a vaccine or effective therapeutic treatment.

Is There An Obvious Path Forward?

Putting aside casino convention and event centers, given the magnitude of the meetings industry, we would expect to see a concerted effort to secure relief. Indeed, prominent campaigns have been launched by stakeholders, including “Go Live Together” and other legislative initiatives to provide recovery support.

Even small effects from legislative relief efforts could result in big impacts in terms of jobs and GDP. We envision relief designed to simultaneously increase confidence in public safety at events and effectively subside the cost of attendance:

The Innovation Group estimates that relief measures could stimulate between $90 billion and $110 billion in spending on meetings, which would restore 700,000 to 900,000 direct jobs and $50 billion to $60 billion in national GDP.

Given the size and nature of the convention industry in Las Vegas, the city may feel the impact and benefit of such relief disproportionally. However, the question remains: if you rebuild it, when will they come?