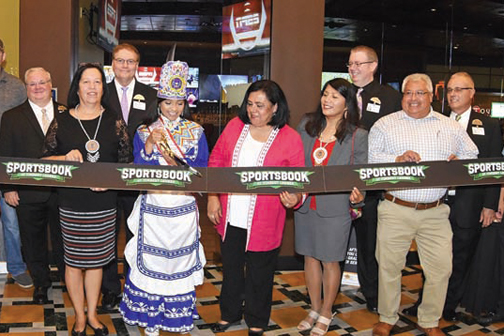 Eastern states reacted quickly to the U.S. Supreme Court repeal in May of the Professional and Amateur Sports Protection Act (PASPA), enacting legislation to permit wagering on professional and college sports.

The landscape promises to change dramatically following the midterm elections in November, when several Midwest, Great Plains and Western states—many dominated by American Indian casinos—begin taking up the issue.

“We think it will be two to three years for a majority of states to pass some form of sports gambling,” Sara Slane, senior vice president of the American Gaming Association, told HartfordBusiness.com. “Within five years, you’ll have the vast majority of states with it.”

Many tribes see legal sports betting as an opportunity to attract younger customers disinterested in slot machines and wedded to smartphones and skilled gambling. Advancing technology and mobile and iGaming are viewed as crucial in the evolution of tribal gambling.

“You have to concede that’s a transition that is going to happen, eventually,” says Chris Stearns, a Navajo and member of the Washington State Gaming Commission. “It’s the wave of the future.”

A number of the 240 tribal governments operating casinos in 29 states are working their legislatures to get in on the action.

Spirit Lake Casino & Resort—one of five American Indian casinos in North Dakota already allowed to offer sports betting with the Supreme Court repeal of PASPA—is one of several tribal government gambling operations anxious to get into the business.

The tribal-state compact Spirit Lake and other North Dakota tribes signed with the state permit them to operate sports betting now that PASPA is overturned. Spirit Lake tribal officials are in partnership talks with William Hill US Race & Sports Book, an international wagering company.

“I don’t think it will be a full-blown sports betting operation,” Slot Director Jason Thompson says of the 650-machine casino and 120-room hotel. “We don’t have the capability to do that.”

“I think we’ll integrate it” into a bar-restaurant, Thompson says, a project that awaits a May tribal vote to allow alcohol in the casino.

A sports book requires a major investment in staffing, technology, data and marketing. Yet, a book generates only a 2 percent to 5 percent profit margin. It’s a risky, expensive, labor-intensive business.

Most tribes lack the resources to operate distinct books. Those that get into the business will likely incorporate betting windows in sports bars or install kiosks. The risk will be left to third-party operators like William Hill.

“It’ll be a plug-and-play thing,” says a tribal regulator who requested anonymity. “We’ll provide the physical area where they put their stuff. The company will take care of all the details—set the betting lines and take the risks—and the tribe will get a percentage.”

The Sac & Fox Tribe of the Mississippi, operators of the Meskwaki Bingo Casino Hotel 50 miles west of Cedar Rapids, Iowa, is awaiting legislative action in 2019 on a bill to permit sports betting.

“We’ll explore all our options,” General Manager John Apacki says of the 1,300-slot casino and 400-room hotel, the largest of three tribal gambling operations in the state.

Apacki doubts sports betting will generate much revenue in a rural state with no professional teams and 19 commercial casinos competing for the wagering dollar.

“Given our market and the fact this is going to be new to the state, there should be an interest in it, locally,” Apacki says. “But as far as extended interest, I don’t see that. It’s just going to be another amenity as in keno, race books, bingo.”

Progress Will Be Slow

The Mississippi Band of Choctaw Indians—which shares the state’s casino market with 34 casinos—became the first tribe to take sports wagers on August 31.

Phyliss Anderson, chief of the Mississippi Band of Choctaw Indians, which operates the resort, was on hand for the ribbon-cutting, and said the introduction of sports betting at the casino will be a nice added feature for guests.

“Anytime we improve at the resort, it’s always special,” Anderson said at the ribbon-cutting. “We’re always looking to expand for our guests and to bring amenities for customers to our resort.”

Sports betting legislation in states with tribal casinos has been slow to emerge, partly because many Midwest and Western states require constitutional amendments through ballot initiatives to permit wagering on professional and college sports.

An additional, major obstacle is that tribes operate casinos under the Indian Gaming Regulatory Act (IGRA) and tribal-state compacts, a complex set of federal and state laws and regulations that restrict expansion of legal gambling.

The tribal-state regulatory agreements, or compacts, usually give the tribes statewide or regional exclusivity to operate casino gambling, often in exchange for a share of revenues. But the compacts limit the type of gambling tribes can offer their customers.

Many states are contemplating allowing racetracks, card rooms, taverns and lotteries to offer sports betting, claiming tribal compacts do not include wagers on professional and college sports.

Protecting gambling exclusivity and limiting competition is a primary focus of the tribes with the repeal of PASPA.

“We are always trying to be on our toes in anticipating expanded gaming in the state that will somehow diminish our own operations,” Fox says. “We are very much concerned about how the state will approach the issue.”

“We hope to bring forward a ballot proposal for a constitutional change in 2020,” Mike Rodman of the Deadwood Gaming Association told KOTA TV.

“They want to create casinos in the cities up and down the two interstates in South Dakota,” Weston says. “Indian casinos are never going to survive.”

The legal debate over exclusivity has caused delays in enacting sports betting legislation in Connecticut, where the Mohegan and Mashantucket Pequot tribes share the casino market.

IGRA and the compacts are also blamed for delays in enacting legislation in Michigan—where three Detroit casinos share the statewide market with 13 tribes—and Oklahoma, where 31 tribes operate some 130 casinos ranging from travel plazas to upscale resorts.

Arizona tribes operating 27 casinos are standing fast on exclusivity provisions in renegotiating compacts that currently pay the state about $80 million a year.

And at least some New Mexico tribes are rumored to be taking the legal position that their current agreements include sports betting. Most states are demanding the pacts be renegotiated.

Not An Easy Process

A proposed ballot initiative for the 2020 election in California would permit licensed gambling operations, including the state’s 62 casino tribes, 75 card rooms and racetracks, to operate sports betting.

The initiative is being pursued by political consultant Russell Lowery and the group Californians for Sports Betting. Most believe the initiative is the product of the card room industry.

“I don’t think the vast majority of tribes are going to want to see that ballot initiative proceed on its own without some counter proposal that protects the tribes’ interests,” says Steve Stallings, chairman of the California Nations Indian Gaming Association.

“Right now our position is we do not support expansion of gaming in California. We’ll wait to see how things develop.”

“This proposed measure would bring Vegas-style gaming to nearly 100 locations and urban areas throughout California,” Mark Macarro, chairman of the Pechanga Band of Luiseño Indians, told the Los Angeles Times. “This is not in keeping with California’s longstanding policy of limited gaming, and we will vigorously oppose this measure.”

Eleven Minnesota tribes operating 19 casinos are hesitant to renegotiate tribal-state compacts necessary to operate sports betting. Current agreements are in perpetuity and do not include revenue sharing. Tribes may, however, negotiate a separate compact to cover sports betting.

“The tribes are doing their due diligence separately,” says John McCarthy, executive director of the Minnesota Indian Gaming Association. The leadership will meet in September. “We’ll share the information and hopefully make a decision as to whether we’re going with it or not going with it,” McCarthy says.

“The Ho-Chunk Nation is considering whether it is worth the investment to have sports betting before it would ask the governor to reopen the gaming compacts to allow it,” tribal public relations officer Collin Price told Urban Milwaukee, an online publication.

“The nation’s initial analysis shows that the revenues generated from sports betting being reported in the national media may not translate into the Wisconsin tribal casino setting.”

Sports betting legislation in Wisconsin would require a ballot initiative to amend the state constitution.

A few of 11 Oregon tribes are interested in pursuing sports betting. The state lottery contends it already has the authority to offer wagering on sports, in that the state was exempt from PASPA.