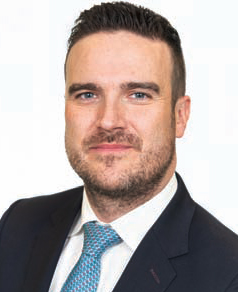 Johnny Aitken leads PointsBet’s move to stand out in a crowded sports-betting space. The Australia-based company has invaded the United States with a flourish, with a different approach to sports betting.

“We understood U.S. sports,” he says. “We’re very familiar with it and it’s a big part of our Australian operations. We didn’t have to learn all the nuances.”

Aitken has also helped PointsBet strike partnerships with leading sports organizations, teams and franchises to provide both PointsBet employees and customers with a unique sporting experience.

Along the way, the company gained instant notoriety with its PointsBetting concept, one part of its overall portfolio. It’s sports betting on steroids, rewarding high margins of victory with exponentially large payouts and large margins of defeat with bigger losses.

“In a normal sports bet, you bet whether the team is going to win or lose,” he explains. “With PointsBetting, the more you’re right, the more you win. For example, if you bet the New York Knicks at plus-10, and they win by five, you win 15 times your bet. If they lose by five, you’ve beaten the spread by five points so you win five times the amount of your bet. It’s higher risk, higher reward.”

Gamblers embrace the concept in which a running back’s over-under can be 40 yards, for example, with an additional payout for every yard over that total.

Aitken has led PointsBet’s U.S. operation as CEO since 2019, spearheading the company’s impressive expansion and steadfast commitment to providing users the quickest and most user-friendly app (iOS and Android) while also providing the best content and experience for sports bettors. Aitken has challenged PointsBet, one of the fastest growing online gaming operators in the country, to remain at the forefront of introducing unique product features and bettor-first initiatives, as well as to continuously offer the most bet types in the world across all major sports. Because PointsBet uses its own technology, Aitken says they have an edge.

“It was a big focus by the founders,” he says. “We wanted to create our own technology from back to front so we could control our own destiny. If we come up with a great idea, we can immediately put it in front of our clients. Our competitors have to send it offshore to a third party and request that the change be made. It gives us a big advantage.”

Aitken cut his teeth in the sports gambling world at Tom Waterhouse, an Australian bookmaker, where he handled multimillion-dollar bets and learned to differentiate between sharp and recreational action.

When global gaming entity William Hill eventually purchased Tom Waterhouse, Aitken oversaw the company’s integrated advertising during televised sporting events in Australia while also rising up the ranks to lead the company’s risk unit, overseeing the P&L. As head of risk, Aitken learned the importance of technology in bookmaking, ultimately shaping the vision for what would become PointsBet’s strong in-house tech foundation.

Aitken later became William Hill’s trading and operations director, overseeing hundreds of employees in the quantitative analytics, customer service, content and accounting departments. While in this role, he drove the NBA to be the largest volume sport for the business by investing in product, promotions and pricing initiatives.

A native of Melbourne, Australia, Aitken received a bachelor of commerce in business from Deakin University. He and his family now reside in Denver, Colorado, where he helped establish PointsBet’s new U.S. headquarters.