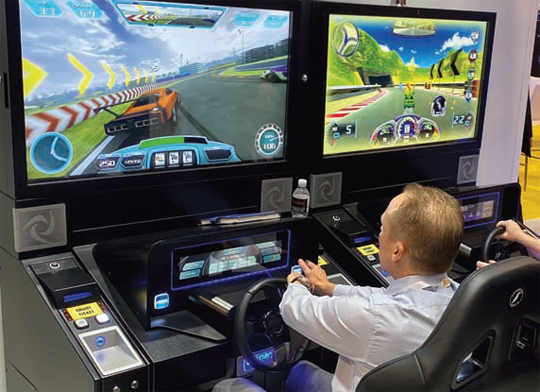 Gaming has presented loyalty points, real-value coins and its own version of bells and whistles to a generation raised on arcade magic. Graphic enrichment, rewards for driving ability and the thrill of a video character’s midair leaps forge an emotional bond with baby boomers. Then there’s the demographic that followed, when the likes of Frogger, Ms. Pac-Man and several driving games found their way to computers, tablets and television screens.

With these games, patrons barely know they’re gambling. They’re just playing around, with the added chance to test their skills, and to win.

Joy of the Jackpot

Synergy Blue has been committed to the skill-game concept since the company’s inception in 2013. It started by developing small bonus games with plans for bigger ones to come.

Skill games have a built-in demographic: players who once mastered joysticks and the arcade-driven likes of baseball and racing games.

“The burgeoning demographic of casino gamblers spans those who grew up playing in arcades to console fans to the first generation of mobile players,” says Synergy Blue CEO Georg Washington. “Today’s gamblers are used to doing more than pushing a button. And while traditional casino games will always have their place on the floor, we have to evolve to remain competitive.

“In a chance-based world, players want gaming qualities that are interactive and make them feel like they have some control: the ability to think, make choices and get better at a game over time. These elements not only increase the fun factor, but they add to the very powerful perception that the odds are shifting in favor of the player, which further increases interest and engagement. We believe that bringing the modern gaming experience into gambling is the key to bringing in new gamblers.”

Synergy Blue’s Joyride Jackpot is the latest and most advanced representation of what Washington calls “Fun You Can Bet On,” and the emerging class of skill-influenced (or interactive) games. Built on the new 2600XL driving cabinet, it creates a next-generation gambling experience by combining the thrill of wagering with video game quality and the engagement levels that today’s players have come to expect.

With the latest gaming technology built into its core, the game is designed to enhance player engagement, attract new demographics with familiar arcade-style hardware and increase net revenue by supplementing traditional gambling games with a brand new type of game play—while also providing flexibility for operators through a library of math variants.

“Joyride Jackpot is one of my favorites, and it’s been a big hit with operators as well,” Washington says. “We introduced an early demo of it last year at G2E and also featured it at ICE 2020, where I’m proud to say it won a Golden Dice Award from European casinos. Our team has put so much effort and expertise into this game.

“Each element—from the cabinet hardware to the multiplayer function to the graphics and even the sound effects—is layered with detail to create a truly unique and engaging experience. It’s a wild, thrilling and super-realistic race to the jackpot.”

Washington says the game delivers an arcade driving experience players can win money on. “We’ve combined the fun of an arcade with the excitement of Las Vegas to ensure high-quality, interactive and seamless game play while also meeting industry regulations,” he says. “Joyride Jackpot is the latest example of how we accomplish that.”

At the beginning of each game, a player chooses the car, the track and a wager. Coins are scattered throughout the racetrack, and every time the player drives over a coin, he’s placing a bet—it’s just like pushing the button on a traditional slot machine. Bonus rounds can earn a higher return depending on the player’s driving skills, or how well he placed in the race. The better the player drives, the higher the potential for winning big in the bonus round.

One thing that sets this game apart is the multiplayer function. Players can race solo or with friends through five different courses, each with easy, medium and hard levels.

“In multiplayer function, your wagers are still your own,” Washington points out. “You’re not betting against your neighbor, so it’s not tournament-style, but more like a traditional multiplayer racing game.”

With a variety of cabinet configurations—arcade driver, joystick, buttons and more—the 2600 series is UL/CE/FCC-certified and compatible with industry standard peripheral devices. The interactive EGMs come in a 40-inch wide-set 2600XL, a 28-inch standard width 2600ST or a bar-top option, the 2600BT. Nostalgic design and unique accent lighting draw both gamers and gamblers, while video content complements the personal experience invoked by the arcade-style cabinet.

The 2600 cabinet series is built on the company’s HAWG platform. It supports an entire library of skill and chance-based game titles, which can be easily interchanged, depending on the cabinet style—and even the style can be configured to support different themes and hardware.

For instance, the 2600 cabinet series can be configured as a touch screen or with a joystick, buttons or trackball. Depending on peripherals, the XL version can be seamlessly configured to an arcade shooter or arcade driver, complete with realistic steering wheel and foot pedals, creating a variety of truly immersive arcade-style casino gaming experiences. 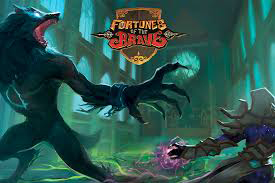 IGT, always at the forefront of innovation, launches another product at the skill-game market.

Fortunes of the Brave has been approved in Nevada and will undergo the traditional 30-day field trial before entering the market, officials say.

“IGT is looking forward to launching Chill Gaming’s Fortunes of the Brave in Nevada in 2020, the innovative product from our ‘skill-plus-chance’ portfolio that leverages a traditional video gaming-type controller,” says Michael Brennan, IGT’s vice president of product management. “We’ve demonstrated Fortunes of the Brave at trade shows around the world, and it’s proven to deliver a unique brand of casino entertainment.”

The target is low-denomination players who are fans of skill-based casino games and other interactive experiences. Fortunes of the Brave combines the traditional slot game with an interactive, skill-based video game feature.

Set in a thrilling fantasy world, players create a character that can be customized with armor, weapons and stylization options. Additional items can be unlocked throughout game play. As the reels spin, “rune fragments” appear as overlay symbols. As runes are collected, they’re counted in meters at the bottom of the screen and can be used to purchase items for the character.

When three or more scatter symbols appear, the skill-based videogame feature is triggered. Players are launched into a four-minute battle where they use a console-style controller to defeat enemy forces. Each environment has different battle features and enemies to beat; the player’s skill level in this feature determines the final score and outcome.

During the battle, the player can use the weapons, potions or cards that have been collected throughout the game play to defeat oncoming enemies. Once the skill video game feature has been completed, the player’s score and prize pool are displayed on the top screen. Multiple prize pools unlock as players reach higher scores.

When players complete their session, they can store their character’s progress on a unique RFID Game Card issued by the machine. As players return, those cards can be inserted to restore the process.

“Our customers are always seeking new and exciting ways to expand their player base, whether it be through games that incorporate skill, electronic table games, sports betting, licensed slots or even non-gaming amenities,” Brennan says. “Currently, the greatest demand from our customers in the ‘skill-plus-chance’ category remains IGT’s player-favorite video poker content. Although video poker is not often associated with the skill game genre, video poker is very much a ‘skill-plus-chance’ game, as skilled players have the opportunity for better outcomes than less-skilled players.”

AITO Corp., a pioneer in the video game industry, famous for producing “Space Invaders,” “Bubble Bobble” and “Arkanoid,” is entering the mobile esports arena through a partnership between Taito, Next Gaming and Celer Network’s mobile esports platform, CelerX.

In 1994, Taito defined the bubble-shooter game genre by introducing Bust-A-Move to the arcade scene. Following the massive global success of the arcade release, many versions of the game were introduced on various consoles.

Recently, Next Gaming reimagined Bust-A-Move in a skill-based, video slot machine format that stars Bub and Bob (the twin dragon co-stars), which can soon be found in U.S. casinos this year.

With mobile-game revenue expected to surpass the $100 billion mark this year, Next Gaming CEO Michael Darley says, “We wanted to bring a version of our game and others to follow to a larger audience by tapping into CelerX’s expertise in game distribution, network, compliance and security. The benefits of running on a layer-2 blockchain game platform provides an extra level of security and peace of mind for our players, especially when playing for real money in the iGaming and esports markets.”

Taito, Next Gaming and the team at CelerX worked jointly to introduce a version of Bust-A-Move that’s 100 percent skill-based and integrated it with the CelerX SDK, enabling fans of the Bust-A-Move franchise to wager real money to test their skills against others. The game comes complete with leaderboards, regular tournaments and the ability to directly challenge other players in a head-to-head competition.

The collaborative team is working on a series of mobile esports games based on Taito’s game titles, which are loved by generations around the globe.

“On its 25th anniversary, we’re honored to bring Bust-A-Move Real Money Tournament to the fans where they can test their skills in a real-money competition directly from their personal mobile devices,” says Mo Dong, co-founder of the Celer Network. “We’re excited to see that Celer’s advanced layer-2 blockchain scaling solution is powering this initiative. Additional games are expected to be released in the second half of 2020.”

“We’ve been working closely with Next Gaming to introduce skill-based video slot machines, and are even more excited to extend the experience to the mobile esports platform on the Celer Network,” adds Tetsu Yamada, president and representative director of Taito Corp.

The iOS version of Bust-A-Move Real Money Tournament is now available within the Arcade Win mobile app and as a single-title game release using real money and free in-game tokens within 37 U.S. states and Canada. Additional markets are to be announced.