Casinos from Macau to the U.S. rely on electronic table games to address unmet demand 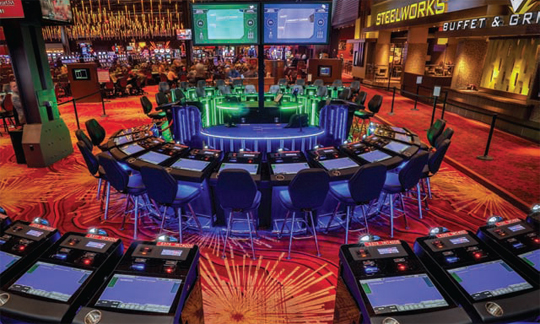 Table games have always been at the foundation of the gaming industry. But with the rising costs of labor, and in some jurisdictions an overwhelming latent demand, manufacturers have developed versions of table games that incorporate the technology behind present-day gaming machines.

Electronic table games (ETGs) present gaming patrons with a digital incarnation of traditional games such as roulette, blackjack and craps. Besides reducing labor—ETGs often have a digital dealer, or one live dealer serving dozens of terminals—ETGs also serve as a complete alternative to tables for markets that do not permit table games but do permit other forms of electronic gaming, allowing them to capitalize on existing demand.

ETGs have seen tremendous success in Asian markets, but adoption in the United States has been considerably slower.

The Rise of ETGs

ETGs first became available to casinos in early 2000 and were quickly adopted by casino operators in east Asia. In Macau, where the demand for table games is so high that casinos can yield their games to price out much of the market, ETGs offered a low-cost way to service this latent demand.

Regulation changes driven by lawmakers in Macau who favored live-dealer ETGs, or “stadium-style” play, re-categorized ETGs as similar to tables and restricted their numbers. The addition of live dealers, however, did bolster consumer confidence—seeing someone turn physical cards seemed to provide a sense of security that players are not being taken advantage of by software.

Despite increased regulation, Macau’s new laws still allowed up to 55 ETG seats to count as equivalent to one live table, which on average has just six seats. Unsurprisingly, Macau operators used this to increase their ability to spread table games. By 2017, the average Asian casino had a robust ETG business, dedicating approximately 5 percent-10 percent of casino floor space to their operation.

In 2018, Galaxy Entertainment Group, which operates four of the largest casinos in Macau, released a total ETG revenue of more than $300 million (USD), a 14.6 percent increase from 2017. This growth suggests a winning combination of consumer preferences and operators taking an aggressive approach to ETG supply. However, the narrative changes greatly when we begin to look at ETGs and their performance in the United States.

Impacts on ETG Growth in the U.S.

Gaming facilities in the United States have not seen the same ETG adoption rates as their Asian counterparts. The performance has been “lackluster,” as one gaming operator so eloquently put it. But, why? One possible reason is demand differences.

States classify ETGs in many different ways. In New York, they are treated similar to slot machines (hence, they are permitted). And since commercial casinos in New York are not permitted to have table games, ETGs enabled New Yorkers to have access to a version of table games without driving to Atlantic City or Pennsylvania. This effect mirrors the Macau phenomenon, where there was a large volume of unmet demand.

In 2017, Interblock installed North America’s largest ETG footprint, over 1,000 units, at Resorts World New York City. Likewise, Empire City Casino in Yonkers, New York has more than 520 ETGs integrated across the gaming floor. Here, the table game limitations, ETG positions and market demographics are much more in line with what is found in Macau.

These conditions have provided reason for expansion into a larger ETG position—the casino has increased the number of machines by nearly 188 percent since first adopting them in 2013. The perception of ETGs from gamblers in the Empire City market was that ETGs offered an acceptable substitute to traditional table games, which were absent due to the local gaming laws in place. ETGs can work in the right places under the right demand scenarios.

Empire City presents its ETGs in a creative way, via Interblock’s Pulse Arena, which includes a variety of music, visual effects and user-friendly stadium-style setups that create an inviting experience for younger players.

The Pulse Arena has a DJ booth, video wall, chat functionality and other effects. The success behind the Interblock layout comes from their blending of event-style displays and gaming in a way that is more inviting to patrons who participate in tech-oriented social settings already but would not typically get involved with traditional casino play.

In other jurisdictions—for example, Washington state—live tables are allowed, but there is a cap on the number of tables that each facility can operate. As in Macau, ETGs would alleviate some of the excess demand, making them a strong candidate jurisdiction for the product and operations like Pulse Arena.

Additionally, casinos in Pennsylvania have a split tax rate—approximately 55 percent on slots and 16 percent on tables—and ETGs are taxed at the table tax rate. A former Pennsylvania operator shares, “Even if they aren’t performing at house average, ETGs are still great from a tax perspective. Plus, most casinos just have too many slots on their floor, and ETGs speak to a different demographic.”

Wind Creek Casino (formerly Sands), in Bethlehem, Pennsylvania, has had one of the largest rollouts of ETGs in the country. With around 150 machines in a stadium-style setting, Wind Creek is the exception, not the rule, though.

Another possible reason for ETGs’ “lackluster” performance stateside may be that operators are simply getting rid of them too quickly. One operator we spoke with lamented that he’s seen teams pull ETGs off the floor after just six months. Why? Because they weren’t performing to the level of the slots.

However, this operator argued that slots cannibalize slots, while ETGs generally do not. In other words, the money that the ETG makes—even if it’s less than the slot floor average—is new money, money from a different demographic, younger and more male, whereas the revenue from a new slot machine would largely steal from the rest of the slot floor.

Similarly, a tribal operator opines that sometimes we aren’t evaluating success correctly: “You also have to make sure your analytics are measuring the right thing. Did you bring your ETGs on the floor so you could close your pit overnight and save the labor? Then you need to look at performance overnight and not during the day.” He also says that while he doesn’t see ETGs in the U.S. ever getting to the level of Macau, he believes that there’s a place for ETGs in nearly every casino.

Robert Rippee, director of the Hospitality Lab and the Esports Lab at the International Gaming Institute at the University of Nevada, Las Vegas, thinks demand plays a role, but that it also might just be cultural. “There are cultural differences between the markets. There’s less concern about the social aspect (in Macau). It’s, ‘How do I get to participate in the gambling fastest?’ And when live tables are five (players) deep, ETGs present an opportunity.”

ETGs carry a much lower labor cost than live tables. This is especially relevant as we see substantial minimum wage increases taking effect across the country. ETGs also offer a greater level of efficiency than live tables in a number of areas—no waiting for dealer fills, no waiting for a supervisor when a player buys in or coloring up when cashing out, accurate records of bets, accurate payouts, and accurate player ratings. So, where do we go from here?

Given that ETGs have the ability to cater to markets that have limited table game supply and younger gamer populations, as well as the labor efficiency and potential tax advantage as more states establish a split tax rate, we will likely see growth in the ETG landscape.

Will the U.S. get to Macau levels? Hardly. But we agree that ETGs are a useful tool in a casino’s toolbox to produce more accurate player ratings, attract a different demographic, conserve labor, and improve yield.