Progressive jackpots and side bets bring profits to the table 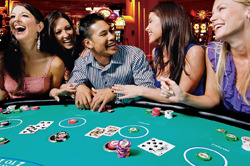 It’s a simple addition to a table game that makes it more fun, makes people want to play longer… and makes the casino more money.

Progressive table-game jackpots are side bets added to traditional table games that jack up the house edge in return for offering players a big-money prize for certain hands. Todd Haushalter, director of product development for Las Vegas-based Shuffle Master, says the “Rapid Hit Jackpots” product has given a boost to the company’s hit Three Card Poker table game.

“Historically, the objective of progressives has been to get the jackpot as high as possible,” Haushalter says. “But we found that with Three Card Poker, there are only a few ways to make it complex, so we chose Ace, King and Queen of spades for the top prize, which hits every 22,100 hands. That is much more often than almost any other jackpot out there. The jackpot starts at $1,000 and hits at around $5,000.”

Haushalter says they were concerned initially that people would even play for such a small jackpot. “However, players are smart; they figure it out,” he says. “When you tell someone they have to get a straight flush or royal flush, they can figure out how hard it was.”

Although the prize might be $5,000, the odds of winning are much better than, for instance, a Megabucks jackpot, which Haushalter compares to flipping a coin to try to get 20,000 heads. “People play the progressive with greater regularity and play the lower-jackpot game because they might actually win tonight, and it might change their life for a while.”

In all cases, the progressive side bets barely change the table’s appearance. “We try to preserve the feel of a table as much as possible,” says Haushalter. “A player shouldn’t have to jump through hoops.”

The progressive is indicated by a little red circle at the front of the table layout. “When you place a chip on it, it lights up,” Haushalter explains. “The dealer presses a button to lock in the bet. Players prefer the Shuffle Master progressive because it is simple.  You don’t need to buy credits for a meter and then push buttons to bet while having to still use chips to play the game.”

The bet is a fixed amount, set by the house. A portion of it goes to increment the jackpot and another goes to the casino.

The 22,100-to-1 hit rate on the Three Card Poker progressive compares to 649,739-to-1 for Caribbean Stud, which requires a five-card royal flush. For every winner on Caribbean Stud there are 29 winners on Three Card Poker. “Players notice this, and this is why we make our jackpots hit with higher frequency,” says Haushalter.

The odds on the progressive side bet favor the house more than the game itself does. Says Haushalter, “Almost universally, as you give yourself the chance to make money, you give the house an advantage. It’s not often you can get players to smile about making a high-house-advantage bet.”

It’s a measurable benefit for the casino. Overall, blackjack’s hold percentage is 13 percent; the progressive jackpot bumps that up to 15 percent. More important: players play longer. “The idea that you can hit a big jackpot playing a $5 game is incredibly appealing and it does get people to play longer,” Haushalter says. “They will spend more time at the table—which benefits the casino. We were recently told by a major operator that the Shuffle progressive with the red coin spot generated 3.6 dollar bets per round.”

Canadian supplier DEQ Systems has built its business around table-game side bets, including a popular line of progressive systems. “Everything in casinos is merging into collective progressives,” says company CEO Earle Hall. “We thought that was the way to go with table games, too.”

All table games in a casino equipped with DEQ technology are linked, to increment the jackpots higher than other side-bet setups. “Table players like to see higher jackpots,” Hall says. “When the jackpot hits $100,000, the excitement begins to peak.”

The goal, Hall says, is to network enough tables so jackpots reach that number more often. At one of DEQ’s most successful customer locations, Barona Resort and Casino near San Diego, every poker-derivative game is linked to a progressive jackpot. “That is why the intensity of the game play of side bets is so high,” says Hall. “Linking multiple game sites together means that more people are going to play.”

DEQ advises customers to keep the jackpots at a certain level all the time. “If a client tells me they want to see below $50,000, I write them a clear email telling them what the effect will be,” Hall says. “If a client is stubborn, I will have one of my good clients call. Clients consider vendors to be peddlers, so they don’t always respect our opinions. But I will get one of our clients who knows our system to give them a call and make sure they are getting the right amount of money in the bonus.”

It’s really very simple, says Hall. “If you use the behavioral characteristics of players, you will make lots of money from our system.”

One of DEQ’s newest table progressives is Bad Beat Progressive Blackjack. It is a side bet that pays any time the blackjack dealer beats your 20 with a 21.

“We had one of the very respected people who surround Barona, Max Rubin, a professional blackjack player, study behavioral characteristics of players and how they react when the dealer gets 21,” Hall explains. “What Max did was work out, according to the principles of blackjack, how many cards it would take to get a really interesting side bet. It works on the principle that most people, when they get a 20, think they’ve won.  So by creating a side bet, we’ve been getting a hell of a lot of positive feedback.”

All you see at the edge of the table is a mini-computer with an LCD screen. When the pit is closed, the screen can be used for marketing or promotional purposes, or to show a football game. The dealer does nothing. “Our technology seeks to automate as much as possible to ensure that the dealers remains focused on the game and customer service,” says Hall.

The system produces data that, says Hall, supports the theories of seeding of jackpots, and verifies performance of dealers. “I can tell you how much you are making an hour, which is something that no one can do on the base game,” he says.

The company’s “Unplugged Edition” is 100 percent off-the-shelf, and is offered free to DEQ clients. “I have a lot of issues with excessive proprietary systems in the gaming industry,” says Hall. “We had some very good clients in Las Vegas who said it was going to cost them $10,000 to $15,000 to pull some wires. My knee-jerk reaction was that this was too expensive, so we found another solution. I don’t come from a proprietary background. My philosophy is to build the best product.” The new wireless technology has dramatically reduced the cost of progressive installs.

Poker, blackjack and pai gow lend themselves best to progressives, says Hall. So far, no one has succeeded in building a successful baccarat progressive solution. “In 2010,” Hall says, “I spent many months in Asia, going from casino to casino, trying to figured out why that was the case. I honestly think we figured it out.”

What exactly he discovered will remain a secret for the time being. “We probably won’t be able to address it until late 2011 or early 2012, because it is a completely different mind shift compared to anything that has been done in the progressive world,” says Hall. “We are working hand-in-hand with a company in China and other companies to do a hell of a lot of R&D and be able to stabilize something for testing this year.”

Las Vegas-based Galaxy Gaming is another company that has stuck to the credo of simplicity in side bets. Its popular “Lucky Ladies” bet is a prime example—players wager on whether their first two blackjack cards will equal 20. This year, the company is adding competition into the side-bet jackpot mix. According to Galaxy CEO Robert Saucier, the company will soon introduce “Megashare,” a system that allows players to compete for a jackpot, or to win a share of a secondary prize fund.

“You have a jackpot; one meter is $100,000 and the other is $150,000,” Saucier explains. “Let’s say the $100,000 is won if the player gets a royal flush. Other players on the network would get a share of a secondary jackpot.” All players at the same table could split it, or it could be networked to multiple tables or even multiple casinos.

This is different from a traditional progressive, which, in its purest form, puts a percentage of each wager into a fund, which is escrowed to be distributed later. “In bonus jackpot systems, the casino collects information on the number of wagers, but the amount of the jackpot is controlled by the casino—the casino’s money is given away, not the players’,” says Saucier.

The Megashare system uses a central data center that stores information from casinos anywhere in the world. The bonus requires a side bet. “You determine what the odds are that trigger the event,” Saucier says. “You determine the jackpot. Sometimes, smaller jackpots with higher hit frequency become more appealing.”

Detection of the Megashare wager is electronic. The take or pay is handled by the dealer. It can also be used on electronic poker games.

Megashare has a minimal impact on the table game environment. “We are traditionalists,” says Saucier. “We believe in real chips, real dealers, real cards. The sensors and display we minimize as much as possible.”

Like other bonus progressives, Megashare benefits the house. “It’s a lottery mentality,” says Saucier. “A lot of people believe this is their lucky day and that they can get rich. It adds more excitement to the game.”

Saucier sees the percentage of tables using electronics increasing significantly. “There is such a revenue opportunity,” he says. “If casinos operate fairly standard liberal rules, it’s very difficult to make money with that. So what they have done is to put the edge in their favor.

“We need to attract more players, and lowering the payout won’t attract more players. My general rule is to keep the standard rules but give them progressive bets or side bets to make them voluntarily add money. If you want to improve profits on blackjack, don’t change the percentage. With side bets, you give them more opportunities to wager, but the house edge is higher.”