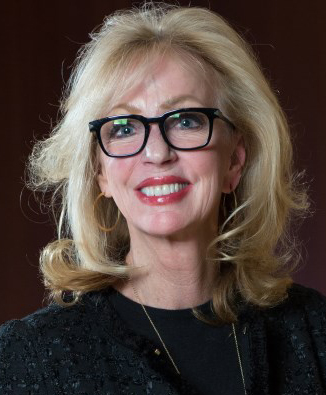 To understand the astonishing career of Jan Jones Blackhurst, it helps to know what her father told her as a young girl.

“You can be a sheep or you can be a goat,” businessman Roger Laverty admonished his daughter. “The sheep follow each other around. The goats go in another direction.”

Over a lifetime in business, gaming, public service and education, Blackhurst has been the goat: toppling boundaries, shattering glass ceilings and challenging the status quo—for herself and others.

Karlos LaSane, regional VP of government relations for Caesars Entertainment, once called her “the people’s champion,” who took a stand for women, minorities and the LGBTQ community at a time when there was no army behind her. So she helped build the army, then led the troops.

Blackhurst grew up in Southern California, “at a time when women weren’t encouraged to do anything.” Her father didn’t subscribe to that limiting view. “I was about 11 years old, playing football in the back yard with my brothers, when I got hit in the solar plexus and got the wind knocked out of me,” Blackhurst recalls. “My dad came running over, and I thought he was going to say, ‘Oh honey, are you OK?’ Instead, he picked me up by the back of my shirt, dragged me to the side of the field and said, ‘When you’re feeling better, get up and get back in the game.’”

She’s been in it ever since, to everyone’s benefit.

A list of her accomplishments would stretch the length of the Vegas Strip and back; the effects have been felt across the industry. Best known as the first woman mayor of Las Vegas, and one of the most effective, Blackhurst became a standard-bearer for social justice, and saw that it was codified in the city’s dominant industry. In 1999, Caesars Entertainment CEO Phil Satre asked her to become the company’s first executive vice president of government relations and corporate responsibility. Blackhurst agreed that parity and equal representation in the workplace is more than good policy. It’s good business.

“If you advocate for people, it means all people,” she says. “If you treat your employees well, if you’re responsible in your community and to your customers, you’re going to have a much better business.”

At Caesars, she created the first responsible gaming program, which met with instant pushback from lawyers. “They tried to kill it. They said, ‘You can’t set this kind of standard.’ The rest of the industry wasn’t happy either. But there was no question responsible gaming had to be the major driver of the code. Thankfully, I had the support of the CEOs, starting with Phil and then Gary (Loveman), who agreed this was the right thing to do.” Other companies saw the handwriting on the wall, and adopted similar standards, which are business as usual in most industries today.

In 2019, after Caesars merged with Eldorado Resorts, Blackhurst left her executive role and joined the board of directors. She then became chief executive in residence at the University of Nevada, Las Vegas International Gaming Institute, spearheading an initiative that promotes diversity and inclusion in hospitality, gaming and tourism.

Today, she’s putting the finishing touches on a jobs platform that will match women and women of color to employment in those industries.

“It’s like the eHarmony of hiring programs,” says Blackhurst with a laugh. “It will look at your resume, assess it for veracity and background, search it for skills, leadership and aptitude, then, given all your life experience, say, ‘Here are all the jobs you’re qualified for,’ or ‘Here’s where you could go if you upskilled in these areas.’”

The program, which she expects to launch early this year, will include online mentorship and also match candidates and companies based on culture. It’s an answer to the oft-heard refrain: “I would love to hire more women, but I just can’t find them.”

At a time when some executives would be content to rest on their laurels, Blackhurst is powering forward. For her, it brings to mind one of her first and most public victories.

“The night I was elected mayor of Las Vegas, to everyone’s shock my dad was standing behind me, and I could hear him saying, ‘I raise goats. I raise goats.’”