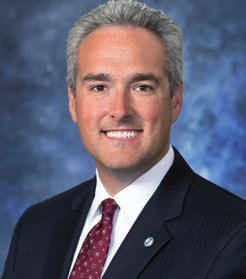 Matthew Levinson became not only the youngest chairman of the New Jersey Casino Control Commission, but the only accountant in the history of the regulatory agency. That a numbers cruncher could run the commission speaks to the importance of finance in the oversight of the gaming industry.

“I got my first job in the accounting and finance department at the Tropicana Casino and Hotel,” says Levinson, who majored in accounting at Villanova University.

After college, the Atlantic County native worked in forensic accounting on the 9/11 attacks in 2001 and the collapse of the parking garage at the Tropicana in 2003.

“Later, I worked for Resorts Hotel Casino as casino accounting manager and senior operations analyst. Those positions gave me insight into how casinos operate as well as the importance of proper regulation,” says Levinson, 37, who holds an MBA from Thomas Edison University.

Prior to the commission, Levinson served as chief financial officer of SOSH Architects, which has done architectural work for every casino hotel in Atlantic City.

As head of the CCC, Levinson has guided the agency through uncharted waters after an overhaul of the regulatory system. He reduced the budget, streamlined operations and enhanced productivity. Despite the reorganization, the commission still issues licenses for casinos in Atlantic City and for all of their key employees.

“I have a staff that conducts in-depth research into gaming issues and their impact on Atlantic City, and also analyzes laws and regulations in other gaming jurisdictions to see if there are ways that we can do better,” says Levinson, oversees over 40 employees with a budget of approximately $8 million.

As chairman, Levinson also serves on the Casino Reinvestment Development Authority, where he helps decide funding for redevelopment of Atlantic City. “I also sit on the CRDA’s audit, Special Improvement District and development committees.”

On a daily basis, Levinson meets with his top staff to go over questions about licensing, reviews of financial reports and other materials, administrative actions and the status and impact of any pending legislation that could affect the commission or New Jersey gaming.

He owes his success to date to the influence of his parents. Levinson’s father, Dennis Levinson, is the longtime county executive for Atlantic County, home of Atlantic City.

“They taught me to work hard for what I wanted, and when I hit a roadblock, work harder,” he says. “And they showed me how to treat people with dignity and respect, regardless of who they are.”

The industry has to be more than just gambling, Levinson says of the future.

“Casino hotels have to offer great entertainment, clubs, food, rooms, spas, shopping and other attractions,” he points out. “If all you have is gambling, your customers will abandon you when someplace more convenient opens. We have learned that in Atlantic City.”

To succeed in the industry workplace, Levinson recommends learning the latest technology and how it applies to every aspect of operations, even though it will be out of date in a couple of years.

“Gaming is no longer just a path to economic growth or development; it is a destination industry that offers people a wide range of experiences, and gambling is just one of them.”