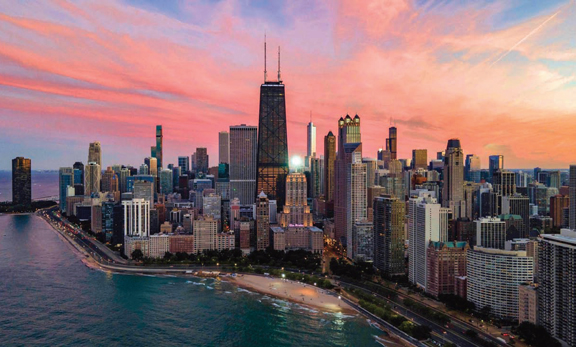 But workers eventually retire, and in Chicago, nearly half of city employees cash out before age 60. And why not? According to the Illinois Policy Institute, the average pension for recently retired Chicago city workers is $65,000 a year, and some lucky government workers reap more than $2 million over the course of their retirement (hence the term “golden years”).

A 2020 report puts Chicago almost $33 billion in hock to unfunded pensions for cops, firefighters, municipal employees and laborers, and Mayor Lori Lightfoot has called it “the biggest problem” facing the city’s finances. She’s counting on a casino to help top up that fund.

In April, Lightfoot threw out the welcome mat with a request for proposals, saying, “We’ve attracted the interest of very serious and accomplished gaming interests from Las Vegas.”

But an effective tax rate of 40 percent—carved down from a mind-blowing 72 percent—kept the Vegas names away. Wynn Resorts looked at the market, and walked on by. Las Vegas Sands was a no-show. MGM CEO Bill Hornbuckle said, “It’s a struggle how it all adds up.” And Caesars CEO Tom Reeg said simply, “I’ve got no interest in Chicago.”

Beyond the tax rate, a Chicago casino will face lots of competition. Last summer, Illinois Governor J.B. Pritzker signed a massive gambling expansion bill authorizing six new casinos in the state. But asked about market saturation, Lightfoot professed to be unconcerned. She said, “There’s no place else in the Midwest that offers what we do.”

In the Plus Column 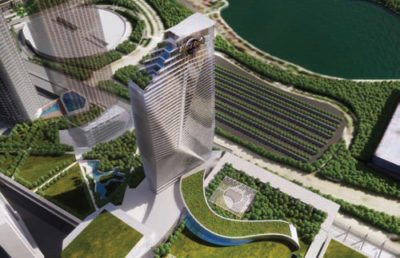 The Windy City is the third most populous in the U.S., with 9.5 million residents. The continental gateway was visited by more than 57 million tourists in 2018, and has been Condé Nast’s Best Big City in the U.S. for five years now. About 53 percent of adults polled said they would visit a Chicago casino at least several times a year. Clearly, says Lightfoot, this is a rich market for the right operator.

Moreover, a 2019 report puts Illinois at 21st among U.S. states for gambling spend, with people spending an average of $246 per year on the activity ($143 on casinos, $103 on lottery). As Lightfoot has pointed out, most of the cars at Illinois casinos have Illinois license plates.

Chicago Chief Financial Officer Jennie Bennett said earlier this year, “There aren’t other opportunities this large where gaming was previously prohibited but now has been authorized. We know there’s untapped demand.”

And Grant Govertsen, Union Gaming principal and author of a 2020 white paper on the Chicago casino project, called the city’s single license “among the best casino-resort development opportunities right now… The combination of available capital and attractive market metrics make the opportunity prime for a Las Vegas-style integrated resort.”

At last count, there were 10 casinos inside Illinois and five more in the pipeline, not to mention four more in northwest Indiana. That’s on top of more than 40,000 slot machines in bars, restaurants and other establishments across the Prairie State.

It’s a crowded landscape, but city officials insist there’s room to “grow the pie” with “a once-in-a-generation opportunity for a casino operator in the heart of a major American city.”

On paper, it’s been estimated that a Chicago casino could bring in $200 million in annual tax revenues to the city. Is that feasible, and if so, is it enough to top off the pension fund?

“We have confidence in the methodology” of the Union Gaming report, says Samir Mayekar, deputy mayor for business economics and neighborhood development. “They estimated that a casino in a steady state of operations will generate approximately $200 million in annual revenues.

“Casino revenue alone is not enough to shore up the unfunded pension funds, which the revenues are dedicated to in state statute,” he continues. “We do expect casino revenues to… provide a much-needed boost on our path to a structurally balanced budget and proper funding of pensions.”

Chicago-based Rush Street Gaming, co-owner with Churchill Downs of Rivers Casino in Des Plaines, submitted two proposals: one at Lakeside Center and one in the neighborhood known as The 78.

Rush Street President and CEO Neil Bluhm has the home field advantage, as well as a chummy relationship with the mayor. One developer told the Chicago Sun-Times, “Everybody sees this as Neil Bluhm’s game to lose. Lakeside Center is probably the city’s lowest-risk choice.”

The same source said Bluhm’s partner at The 78, developer Related Midwest, “has a lot of power in this market,” and Chairman Stephen Ross “has been working the phones here.”

Rush Street certainly has the track record. Just 17 miles from downtown Chicago is Rivers Des Plaines, which has been called the most profitable casino in the country on a per-square-foot and per-device basis. It’s currently adding 78,000 square feet including a poker room, additional gaming areas, a ballroom and a new restaurant. When the expansion opens in 2022, Des Plaines will be the first casino in Illinois to reach the state’s maximum 2,000 gaming positions.

Hard Rock International also submitted a bid. Its proposal near the McCormick Place convention district would link to the huge, proposed ONE Central project next door. If Hard Rock snags the license, it will be all over the region. In December, the gaming entity owned by Florida’s Seminole Tribe opened a temporary casino in Rockford, Illinois, with the permanent venue to open by late 2023 or early 2024. And in May, Hard Rock opened the $300 million Hard Rock Northern Indiana in Gary, one of three casinos in Northwest Indiana that will compete with the eventual Chicago venue.

In a statement to GGB, Jon Lucas, chief operating officer for Hard Rock International, said the global brand “has had a longstanding presence in the city of Chicago going back over 35 years.” Its Hard Rock Café, fronted by the iconic giant guitar, has been a fixture of the River North district since 1986. “We can tell you that our plan is to build a world-class destination that the people of Chicago will be proud of.” 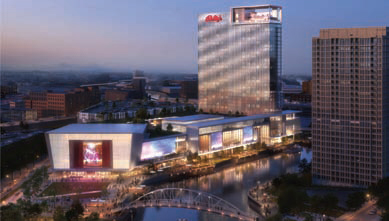 Bally’s Corp. offered two proposals, and one site has already met with some pushback: the 28-acre trucking yard south of McCormick Place. Alderwoman Sophia King said last fall that the plan “should be immediately eliminated” from consideration. “Since the beginning of this process, the community has been clear in their desire not to see a casino built at the site,” she said.

Bally’s proposed location at the River West publishing plant has gotten a better reception. Alderman Walter Burnett Jr. said, “It would be an ideal spot, tourist-wise. It’s right off the expressway. The L station on Grand Avenue brings a lot of tourists into the area on their way to Navy Pier.”

Bally’s Director of Corporate Development Chris Jewett called both sites “economic sleeping giants.” A Bally’s casino would also include a Chicago sports museum, he added. Minority investors would account for 25 percent of the ownership group, including philanthropists, business owners and “a couple of sports stars.”

But ask industry observers, and sentiment seems to go to Rush Street. As Nicholaus Garcia of PlayUSA wrote, “This is a one-horse race. There is no way Rush Street Gaming lets another developer set up shop in their backyard.”

We’ll find out soon. According to the city, the licensee is set to be announced in “early 2022.”

Christopher Jewett: The 70 percent tax rate was out of the question, so we put this to the wayside until they passed legislation to lower it. That brought it back on our radar.

The Vegas operators weren’t able to get it to pencil just based on the size and footprint they’re used to. This will be a resort, but it’s not going to be the size of Resorts World, with 3,000 rooms and massive retail hubs. It doesn’t make sense to come in and build a $3 billion or $4 billion project because of the known competition, with Rockford and Waukegan and the south suburbs.

As for the tax rate, we’re used to operating in a high-tax environment (Bally’s home base of Rhode Island), and we understand the need to right-size the project based on the market.

What value does Bally’s see in Chicago?

This would be a massive opportunity to essentially start from scratch and build what we want. A lot of our properties have been acquired over time; we’ve inherited something that somebody else envisioned. This is the chance to do it our way. And Chicago is one of the greatest cities in the U.S. From a tourism standpoint, it’s Top 5.

How do you make it work, given the tax rate? Bally’s Chairman Soohyung Kim has said a Chicago casino would be your “flagship.”

Again, it’s right-sizing the project and being diligent from a capital investment standpoint.

Your proposal says the Bally’s customer database would come into play. How so?

In rough numbers, we have about 20 million customers in our database, and approximately 15 million of those are domestic. That gives us a leg up, allows us to utilize this as a destination market for Bally’s customers. One thing we bring to the table that nobody else does is a broad outreach through our partnership with Sinclair Broadcasting and Bally’s Sports networks. That will be immeasurably valuable because of the billions of impressions we get a year across the country.

Neighbors at the truck marshaling yard say they don’t want a casino resort there. Why is it viable?

The best example in our portfolio is in Lincoln, Rhode Island (Twin River Casino), where property values have increased significantly around the development, with other developers now coming in and wanting to develop around it too. So we think it’s a plus.

If you actually look at the actual site, it’s partitioned or carved out from the neighborhood, blocks away from any sort of residential area. Of course, we’re here to listen, and want to work with the neighborhood to ease their concerns.

We’re a true regional gaming company that’s growing into a larger gaming company. We recognize the need for this to be a partnership with the city and with the community we operate in. It’s not us coming in and telling the city what they need. Our approach is to be in touch with the best advisers and the best consultants, plus city leaders and Chicagoans or Chicagoland natives, and all work together.