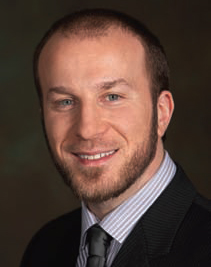 If you grow up in Las Vegas, working in the casino industry in some capacity is bound to cross your mind. For Joseph Marchetti, that thought brought him to Gaming Laboratories International, the leading company which tests technology for regulatory compliance and function.

Armed with a degree in software programming from ITT Tech, Marchetti joined GLI in 2005, attracted by the ever-changing technology and regulations upon which the industry is built. “Plus the friendly team members who interviewed me,” he says.

He started as a Level 1 test engineer in the engineering department. He still works for the company, grabbing advancements at every level—he is now director of systems and audit.

“I have been very fortunate to have the chance to work in multiple lines of the business and with multiple clients over the years. This has kept my interest very well. In addition to that, it is the people that I get to work with every day,” says Marchetti, who relaxes by hanging out with friends and family, and if he gets a chance, playing video games. His favorites are the role-playing Final Fantasy, Call of Duty and the Mario Kart racing games.

For all the chaos it brought, Covid-19 made GLI even more agile and global then it already was, Marchetti says. “Lines of communication have improved enough with the wider acceptance of technology like Microsoft Teams.”

Teams integrates the people, content and tools, according to Microsoft.

Marchetti sees a bright future in the next five years and beyond. There have been great advancements made in the areas of cashless and iGaming in the past few years.

“I expect that this trend will continue over the years to come,” he says. “I anticipate an increase in the submissions and conversations around these technologies in the near future and will work with the GLI teams to best prepare for them.”

That said, GLI and similar firms should have positions opening up to meet the demand, making these jobs fertile ground for engineering job seekers.

“Keep it in mind—I have built great relationships, and developed as a professional as well as a person, all from my interactions within this great industry,” Marchetti says.