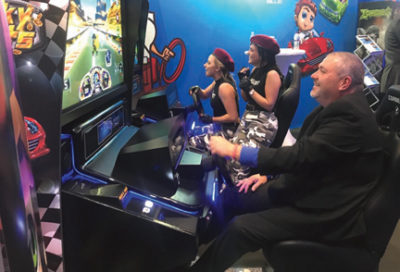 Joyride Jackpot isn’t your father’s slot machine. It’s one of the latest skill-influenced games from Synergy Blue, bringing back the joy of video racetrack games, with the player firmly behind the wheel.

Introduced at Global Gaming Expo 2019, it’s the kind of game that grabs the next generation of casino players, millenials and Gen Z, who were raised on video game systems like Xbox and Nintendo.

Players start by choosing among eight different race cars—from muscle cars to sports cars to exotics—all with unique driving features to match specific tracks. Some have better tires, others more horsepower. Still others come with better handling. Players choose from easy, medium or hard difficulty levels across five tracks, from a standard racecourse loop to winding mountain roads, and even a rainy night course through busy city streets.

Drivers then collect coins on the track to place wagers. As in a traditional slot machine, players can change their bets or cash out at any time. Joyride Jackpot also features bonus rounds, which pay out a higher return for more skilled players.

Interactive, skill-influenced games bring a new element to casino floors, geared towards an evolving demographic. While traditional games may always have their place, especially among older gamblers, the younger generation of players, who started out as gamers, expect more engagement when they gamble, according to Washington.

“They want to do more than push a button. They want an experience that echoes the plethora of games they’re already familiar with and enjoy. With skill-influenced games, we’re able to bring the modern gaming experience into the casino. And we believe that’s the key to attracting new demographics to the casino floor.”

The rollout of new games from Synergy Blue hit a speed bump when Covid-19 led to a worldwide industry shutdown. Washington acknowledges the ongoing risks. 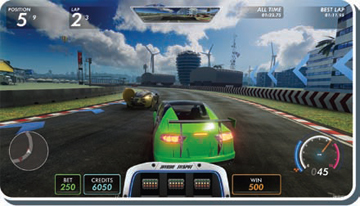 “The casino industry right now is full of uncertainty, which makes it really challenging to predict what’s going to happen,” he says. “We were approved in Nevada for statewide distribution when the closures hit, so we’re eager to see how things progress as casinos reopen.”

Despite the turbulence, Synergy Blue soldiered on, and the Las Vegas-based company plans to launch a slate of games in the fall. Look for Joyride Jackpot by the end of October in a handful of U.S. states, including Nevada.

For many gaming manufacturers and operators, the coronavirus outbreak has caused a quick shift to iGaming, a natural progression for skill games. “Players can still have access during these challenging times,” Washington says.

And iGaming should continue to be a factor even after the pandemic draws to a close. Synergy Blue recently conducted a survey of 1,000 gamblers, and found that 64 percent played online games during the pandemic. Of those, 93 percent indicated they would continue playing them after stay-at-home restrictions fall by the wayside. Synergy Blue’s games would be easily transferable to the online world due to their easy play and familiar genres, Washington says.

Pandemic restrictions aside, many players remain concerned about health and safety, and may be more cautious about returning to brick-and-mortar casinos. If that becomes an issue, casinos will have to meet the challenge of attracting younger demographics to their gaming floors.

“Our recent research, as well as trends seen in the first wave of reopenings, indicates that younger folks may be the first to return,” Washington notes. That means more skill-influenced and interactive games. “Skill games provide experiences that more closely align with the game play and quality levels that modern generations are familiar with.”

The Synergy Blue catalogue features popular titles such as Lucky Candy Ca$h and Safari Match, mobile-style connect-three games wedded to great graphics and play. “We also have our version of the classic game mahjong, for those who prefer a more relaxing experience,” Washington says.

Synergy Blue now has a presence in six countries, including inside Europe. “Within the U.S., we’re active in the California, Nevada and Oklahoma markets,” Washington says. “We are also working closely with casino properties and distribution partners in additional areas that are eager to see our products.”