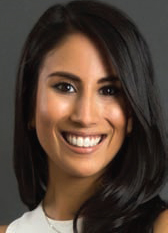 Born and raised in Essex, England, Bhavishi Patel moved to New York at 21, armed with a bachelor of laws degree. She pursued a master of laws at Benjamin N. Cardozo School of Law, Yeshiva University in New York City, specializing in intellectual property law.

When she graduated from law school, Patel knew one thing: she didn’t want to practice law in the traditional sense. She wanted to use her skills and education to help people.

Working for a casino resort didn’t cross her mind, even when she moved to Las Vegas. That changed after she met Eureka Casino Resort founder and CEO Greg Lee at a high school lacrosse game where her cousin was playing. They hit it off, and Lee offered her a position as in-house counsel, director of administration and head of the human resources department.

“I couldn’t think of another industry that allows me to combine so many of my interests into an average day,” she says of Eureka. “My ultimate goal was to use the knowledge of the law and my critical thinking skills in a business operations role.”

That could mean working on remodeling the property, helping to redesign restaurant menus, participating in conversations about branding strategy or assisting employees with challenges in their lives.

Shortly after Patel landed the job, Lee sold the company to the employees, a rarity in the gaming industry. That move became one of Patel’s first major transactions.

“My role has recently evolved to vice president of experiences. The title is our recognition that how the guest experiences our product is most closely tied to the employee owners’ experience with the company,” Patel says.

Despite the apparently seamless transition into Eureka, Patel faced her share of obstacles, the most critical being learning on the job. So many of the tasks she worked on at the outset were completely new to her, working in a new industry.

Patel depended on two mentors, Lee and COO Andre Carrier. Their leadership through good times and times of crisis is unparalleled, she says. “I learned so much regarding innovation, leadership, problem-solving, and service to the communities which we serve, from working for them both.

“As I look back,” she adds, “I couldn’t have asked for a better way to acquire the knowledge I have today. I didn’t have the time to question my ability to do the tasks. It was a case of, ‘Do or do not. There is no try.’”

Patel is still surprised by her job, and no two days are ever the same, a situation she relishes. The Covid-19 crisis showed her the importance of being adaptable and leading through change.

She considers Eureka her home. Her goal is to move forward in the next five years, being on the front line of new projects and pushing the organization to improve.

Similar experiences await anyone interested in the legal side of the gaming industry, she says. “The Las Vegas legal community is unlike any other I know. I found everyone to be extremely willing to help and welcoming, especially as a young, new lawyer in town.”

“Most importantly,” she says, “work for a company where you share the values of the organization and are part of something larger than yourself.”