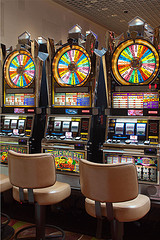 In anti-gaming circles, slot machines are often called the “crack cocaine of gambling.” Opponents often cite the captivating features that slots seem to have on players, claiming this “hypnotic state” removes personal responsibility.

What gaming critics fail to understand, however, is that the machines are just that, machines. They are designed to provide entertainment, thrills and value for the players’ gambling investment.

A report issued by the American Gaming Association in conjunction with Responsible Gaming Week in early August demonstrates that machines are simply inanimate objects that are given power far beyond their limited ability to entertain.

The AGA report, “Demystifying Slot Machines and Their Impact in the United States,” was written by David Stewart of Ropes & Gray, with contributions from Kevin Mullally, general counsel and director of government relations for Gaming Laboratories International, and Spectrum Gaming Group’s Michael Pollock. The report lays out the facts about slot machines, from the numbers in the individual states to the revenue they earn.

It reviews the development of slots from three-reel mechanical devices to the multi-line, multi-screen wonders of technology that today fill the casino floor. The AGA report breaks down where the more than 800,000 slots and VLTs scattered across America are located, how they are operated and tested, and who benefits from the revenue derived from the devices.

In a no-nonsense approach, the AGA report breaks down the inner workings of a slot machine—exactly what occurs when the player pushes the button to activate the device. The report explains what and how determinations are made when the computer progression is triggered, and what makes the player a winner.

The average cost of a machine (more than $10,000 apiece) is outlined, along with an explanation of the new technology available today to gaming operators, from themes and concepts to ticket-in/ticket-out (TITO) to players club cards (loyalty programs).

Perhaps the most startling revelation in the report is the fact that, despite the growth in the number of machines over the past decade, the increase in machine spending has been virtually flat. When adjusted for inflation, slot spend per average player only increased a few percentage points between 1992 and 2009. The percentage of Americans who claim to have visited a casino each year between 1993 and 2009 fluctuated only slightly between 25 percent and 35 percent during the period.

The report also delves into the business strategies used when operating slot machines. Operators can choose from many kinds of machines with many kinds of software programs that allow players to win less frequent, higher jackpots (high volatility); or more frequent, smaller jackpots (low volatility). While the low-volatility machines allow the customer to play longer at the individual games, a high-volatility game is generally more entertaining, with dramatic sounds and graphics, and gives players something to enjoy between the less-frequent jackpots.

By laying out these factors, the report explains how and why a casino operator or a lottery provider makes these decisions, and takes away the mystery that often surrounds slot machines.

Regulations play a big role in the report. Players who often fear that a casino operator can simply “flick a switch” to make customers lose can be assured that regulations in this regard prevent that from happening.

The report’s author also cites chapter and verse from regulatory schemes in various jurisdictions to demonstrate that all machines are required to undergo testing in order to assure that they comply with strict standards.

The report also addresses the “near miss” deception, in which a player is given the impression that he just missed winning a jackpot by one reel stop, which in theory encourages him to try again. Most regulatory agencies strictly control that function by stipulating how many times a symbol can appear above or below the payline in the reel map of any game program.

Maybe the most important and timely section of the AGA report addresses the social impact of slot machines, long the inanimate whipping boy for the anti-gaming crusaders.

After first outlining the benefits of casino gaming—jobs, tax revenues, infrastructure improvements and first-class entertainment facilities—the report delves into some of the nebulous objections of critics.

While the American Psychiatric Society recognizes pathological gambling as a medical condition, there are no studies that definitively link slot machines with the disorder. While some cite anecdotal evidence in their arguments, a full-fledged study has never made the connection.

In new gaming jurisdictions, however, researchers have found a slight increase in problem gambling initially, but after a few years and more familiarity, the levels return to the pre-casino rates.

A landmark lawsuit in Quebec pitted some problem gamblers against the government’s gaming provider Loto Quebec. The suit alleged that the electronic gaming machines were the cause of the gambling problems endured by the plaintiffs. While the case was settled out of court for less than 10 percent of the initial claim, the plaintiffs affirmed that the machines were not the cause of their afflictions.

And attempts by some provinces in Canada and Australian states to “slow down” the players who enjoy slot machines have not borne much fruit. Whether it’s establishing maximum betting limits, installing a “time out” feature on the machines, restricting the time on machine, or flashing anti-gambling messages on the machines, players quickly learn to deploy strategies that defeat these efforts or turn to the illegal gaming machine market, which contains none of the protections installed by legal establishments.

So the bottom line, according to the AGA report, is that efforts to protect the 1 percent to 2 percent of the people who may have a problem with gambling are not fair to the vast majority of slot machine patrons who enjoy the activity with little or no negative consequences.

By demonstrating that there is no sleight of hand or trickery involved in the slot machine business, the AGA report has effectively removed much of the criticism from the arsenal of the anti-gaming elite. To quote from the report’s penultimate paragraph:

“Slot machines bring fun and excitement to a large number of Americans every day. They are designed to entertain and are regulated and tested throughout their lifespan to ensure fairness for players. These machines also have been the engine behind the growth of an industry that contributes jobs, economic development and substantial tax dollars to gaming states and communities. And, while there are those who cannot gamble responsibly, scientific evidence suggests no special link between slot machines and pathological gambling.”