GGB is committed to providing updated news and analysis on our weekly news site, GGBNews.com.
The Agenda

A look at the legacy of Sheldon Adelson, Chairman and CEO of Las Vegas Sands, who passed away in January at the age of 87.

Back in 2014 when I was working as a consultant for G2E, we decided to go all in as it pertained to keynote speakers that year. The plan was to get Steve Wynn to present on Day One and the second day would be Sheldon Adelson, the two biggest names in gaming at that time. And it was contingent—both from G2E’s perspective and the speakers themselves—that both of them agree to do it, or it wouldn’t work. Well, they were both willing to do it, but there was one caveat. Sheldon didn’t really like to give speeches, so he’d prefer to be interviewed by someone instead.

So the question became, who should we get to do it? Maybe a major TV news anchor, celebrity or a respected national columnist. After all, who would turn down a chance to interview one of the most powerful men in America whose contributions could turn the tide of an election?

But then Sheldon’s people suggested that maybe I could do it. I had completed a cover story on Sheldon the year before that they thought was very fair. And Sheldon had opened up to me about his life and his views, telling me about his opposition to online gaming, the first time he had discussed that subject with a journalist. Of course I was very honored and quickly agreed. 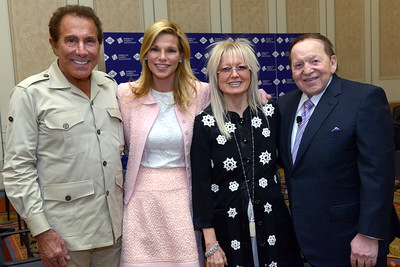 Backstage, it was a meeting of the greats. Wynn and his wife Andrea had arrived early to get a front-row seat to Sheldon’s presentation (where Sheldon sat the day before for Wynn’s awesome speech), and joined him and his wife Miriam in the green room. For two moguls who had a somewhat contentious relationship in the past, it was a warm and friendly reunion. They didn’t talk business, but discussed family and philanthropy.

When we took the stage in our big overstuffed chairs before a packed house of 1,500 people, we began a conversation about his rise in the industry and how he built his business. It was fascinating.

Now, “visionary” is a term we throw around quite a bit in the gaming industry—a little too much, in my opinion. I can count on one hand the people I would consider visionaries. But Sheldon and Steve certainly belong on that list.

Sheldon Adelson was a great businessman, there’s no doubt about that. Even before gaming he had made his mark in several industries. He created Comdex, one of the world’s largest trade shows, which actually led him into the casino industry through the meetings and conventions side. As we recollected his past, he began to warm to the experience, throwing out quips and jokes, pleased with the response from the audience.

Adelson only saw what he perceived to be a threat to his children and his family. He was passionate about protecting them and it showed during that interview. As we ended it and left the stage he was still grumbling at me, accusing me of being “one of them,” a supporter of online gaming, I suppose. But Rob Goldstein, Sheldon’s successor and a longtime friend, was happy. This was the Sheldon he wanted people to see—the human and vulnerable Sheldon Adelson, who simply cared about his family more than anything else.

It’s that humanity that we’ll miss now that Sheldon is gone. Yes, he was a ruthless businessman, but on the flip side, he cared so deeply about his causes, he’d go too any length—and any expense—to support those issues. You may not agree with his tactics or his viewpoint, but you have to respect his passion.

Sheldon Adelson has left a legacy on this industry, and this world, for that matter, that will long endure.