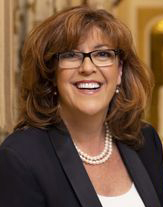 For Jenny Holaday, 2021 was the best of times and the worst of times.

In the “best” column, she was named president of Wynn Resorts’ Encore Boston Harbor—the first woman casino president in Massachusetts, and one of a select few in the industry.

In the “worst” column, she took the reins during Covid-19, which had already caused a months-long shutdown of the property, followed by a grand reopening, then a viral surge that caused a return to part-time operations—all at a multibillion-dollar resort that had only been open since mid-2019.

In the darkest days, Holaday recalls, “Our only goal was to break even.”

For all its challenges, the turmoil left Holaday and her team battle-tested. Late last year, when the omicron variant was identified—again, just as Encore was reaching peak occupancy and revenues—Holaday was unfazed.

“I was definitely holding my breath, because we were at the third or fourth chapter of this book, but I told myself, ‘OK, Jenny, we know how to pivot, we’ve learned how to be nimble. If something happens, in many ways we’ve already got the blueprint” for survival.

Holaday is used to rolling with the punches, thanks to her mother, Sue Ewald. A single parent with scant work experience, Ewald found her first job in the gaming industry, making $1.15 an hour as a cashier at Harrah’s Reno’s famous Headliner Room. She followed her star from Reno to Las Vegas to Atlantic City and back, and the family tagged along.

“We moved around a lot,” says Holaday. “I went to five high schools in four years.” Like Eloise in the famous children’s book series, she also had the extraordinary experience of living at the Sahara Las Vegas, for three full months. She remembers standing on the balcony, eating Monte Cristo sandwiches and marveling at the lights of the city. (By the way, her mom ended up as executive vice president of Harvey’s Lake Tahoe.)

In her own career, Holaday was similarly nomadic, living and working in eight gaming markets and working in many departments: loyalty marketing, retail marketing, and senior-level property management, among others.

So, should aspiring executives be specialists or generalists? Holaday says, “Both. You have to have a core competency in something—if you come up through finance, you’d better be the best in the building at balancing the books. But I’ve always attributed my success to the fact that I bounced around disciplines a lot. Don’t go too vertical in this business. The more you learn, the better.”

She also advises up-and-comers to find an executive champion. “Get noticed by the people who have influence, so when they’re sitting around the table talking about the next class of leaders, your name is in that hat.” And yes, she adds, approach that person, and make the ask. “It’s especially important in larger organizations, where it’s easy to become invisible. Take initiative. Be bold.”

Asked for her best career advice, Holaday offers this: “Time is your most valuable currency, and everybody will notice how you spend it; it will telegraph to people what you value. So when I spend time at town halls with frontline staff, I’m letting everybody know that those people are important to me. If I eat lunch at the employee cafeteria, as opposed to in one of our restaurants, that’s showing that I’m accessible and part of the team. How you spend your time says everything about you. I’m trying to live that.”

Last November, when Holaday spoke to GGB for this profile, Encore was celebrating record revenues for October and its best month for convention sales. Whatever comes next, Holaday says she and her team can handle it.

“At times with Covid, it was devastating,” she says. “But I’m not as anxious as I used to be on Monday mornings. Our experience in changing landscapes and operational requirements has grown pretty deep. So bring it on.”