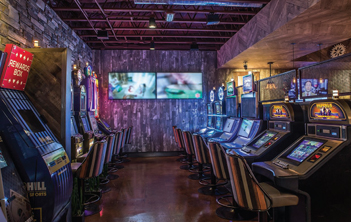 A Democratic state representative from one of the oldest towns in the United States says he’s putting together a bill to license some 38,000 additional gaming machines that could generate hundreds of millions in additional tax revenues.

Bars and restaurants like the Horse Inn or J.B. Dawson’s in Lancaster, Pennsylvania, incorporated in 1742, could offer slot machines—three of them, ready to play between sips of craft beer or bites of a gourmet hamburger.

Pennsylvania has about a $3 billion budget deficit that lawmakers are looking to close by the end of June with the help of several wide-ranging gambling bills.

Sturla’s proposal would permit up to three slot-like video gaming terminals in each of some 12,000 Pennsylvania establishments that hold liquor licenses.

“Currently, there are some 40,000 illegal machines in operation in Pennsylvania,” Sturla says. “This has been a practice that has been going on for 40 years or more. It’s time to legalize these machines so the state and local communities can benefit from them.”

Sturla says there would be strict penalties to dissuade anyone from operating an illegal terminal. He’s proposing a $10,000 fine and the loss of a liquor license for any establishment conducting illegal gambling.

“It’s not illegal to have a machine in your bar, but it is illegal to get a payout,” he says. “At this point in time, I’m going to make sure that all VGTs that are plugged in are legal.”

According to the Pennsylvania Gaming Control Board, slot machine revenue in 2016 was $2.36 billion, about $5 million less than the year before. Table game revenue increased $41 million year-over-year to $853.2 million.

Sturla expects to introduce his bill soon. He admits it wouldn’t completely solve the budget shortfall, but it could go a long way to helping lawmakers reach a deal.

But, VGTs do have the power to generate millions of dollars in revenue.

Pennsylvania’s casino industry has fought all proposals to expand slot-style gaming into bars and restaurants.

The state passed a casino law in 2004, and the first casino opened in 2006. Today, six land-based casinos and six racinos operate in the state, according to state gaming records.

Eric Schippers, vice president of public affairs, says Penn National Gaming looks at the budget situation in terms of “defending our existing investment and the 2,300 jobs that we have at our Hollywood casino, as well as look at it opportunistically to see whether we can get gaming out of this. Frankly, there has been a lot of discussion around VGTs, so we’ve been working potential models that would work for us—protect our investment and allow some upside.”

Sturla expects opposition from the state’s casino operators, who have compared VGTs to a convenience-gaming market that would erode their business and the tax revenues they pay.

“We are limiting it to establishments with alcohol,” Sturla says. “There are still dry counties with no liquor or gambling in Pennsylvania. Nobody can complain that I’m cannibalizing their business.”

Sturla says the exact provisions are still being worked out, but he expects an initial fee to obtain a license and a division of the tax revenue among the state, municipality, hosting venue and the VGT or distributed gaming company.

As Sturla completes the bill, he remembers his defeat in last year’s legislature.

“My motivation to write this bill is it’s an additional source of revenue.”

Sturla is considering sending 33 percent of the annual win to the state and between 5 percent and 10 percent to local municipalities.

“That’s the part we are still working on,” Sturla says.

If VGTs were legalized, tax revenues are estimated at $300 million.

“Pennsylvania isn’t so much unique as it is big,” Fantini says. “The estimate is that adopting slot routes similar to Illinois could result in a market of 30,000 to 40,000 slot machines. That’s like adding 15 to 20 new major casinos.

One of those companies is Las Vegas-based Golden Entertainment Inc.

An executive with Nevada’s largest distributed gaming machine operator says he sees opportunities in Pennsylvania as well as other markets.

“It’s a very attractive market,” says Blake Sartini II, senior vice president of distributed gaming for Golden Entertainment. “We will keep ourselves updated with what’s going on. When the time is right, we’ll be ready to jump into that market.”

Under Sturla’s VGT plan, each licensed liquor establishment could apply to install up to three machines per license. He expects an expansion of about 1,000 machines per year, with a total reaching more than 38,000.

“Three machines is a good place to start,” Sturla says.

The Video Gaming Coalition argues VGTs would generate $165 million annually in new tax revenue, with revenue going to the state and local governments.

In Indiana, the games would be limited to $2 wagers at most, with a maximum payout of $599. According to the Video Gaming Coalition, the money raised by VGTs would help pay for infrastructure improvements.

Sturla says Illinois has demonstrated the potential of legalizing VGTs. “Illinois is our model,” he says. “We want to learn from their experience so when we project a number it’s accurate.”

Illinois first legalized VGTs in 2009, permitting licensed establishments to have up to five terminals if they also have a liquor license.

But VGTs were not appearing in bars and taverns until 2012, due to the Illinois Gaming Board taking three years to evaluate applications and select a computer system to monitor all of the state’s terminals.

Illinois terminals came online in September 2012, and now there are 24,841. In 2016, they generated $332.4 million in taxes, with the money going to both the state and local governments.

That’s without terminals being legal in Chicago, but they’re available at 5,727 locations.

The first revenue report issued for September 2012 showed 61 machines in 13 outlets with $1.07 million played, and the net amount kept by bars and taverns at $90,030. Total taxes for the first month were $27,016, according to data compiled by the state gaming board.

“Illinois is the densest population, which makes it an attractive VGT market,” says Sartini.

Sartini admits there were some obstacles to being successful in Illinois, including betting limits and win limits.

“It’s attractive,” Sartini says. “Everywhere you go, the fundamentals of the market are good. We just need to find the right opportunity.”

VGTs are also more prevalent these days than slot machines in Illinois, with the state’s 10 casinos hosting 10,905 machines.

Casino operators believe the market is saturated as a result of VGTs.

“Casinos in Illinois have made the claim that their low rate of growth is at least partly attributable to the proliferation of VGTs,” Fantini says.

When asked how casinos can stem the loss of revenues from VGT expansion, Illinois Gaming Association President Tom Swoik says that was a tough question to answer.

“I believe it is in our best interests to continue promoting our casinos as entertainment venues, not just a place to gamble,” Swoik says. “We have four- and five-star restaurants, hotels, bands, concerts and staff trained to make your casino experience wonderful.”

The Illinois Casino Gaming Association represents eight of the 10 casino operators in Illinois.

“An additional concern again this year is legislation that had been introduced to add six new casinos and allow slots at four racetracks to an already saturated market,” Swoik says.

A recent report by the Illinois Commission on Government Forecasting and Accountability supported the casinos’ position, noting that adjusted gross revenue receipts—what was taken in, minus what was paid out—of the five casinos surrounding the Chicago metro area had fallen by a combined 9.3 percent between 2012 and 2016.

Video gambling has “no doubt has been a significant contributor” to the decrease, according to the report. The state’s indoor smoking ban and the recession were also factors in the decline, the report says.

Illinois continues to operate without a state budget. One of the budget proposals being offered would add six new casinos to the 10 already operating in the state, including one casino in Chicago.

The availability of VGTs in the suburbs “has diminished the revenue potential” a Chicago-based casino once had prior to the rollout of VGTs, the report found.

VGT operators, such as Dotty’s or Pocket Aces Gaming, were originally prohibited from having a substantial interest in more than 5 percent of the machines licensed by the Illinois gaming regulators.

However, that restriction was overturned in 2010.

That decision opened the market to Dotty’s and other distributed gaming or slot route companies to expand.

Penn acquired Prairie State Gaming, an operator of 1,100 terminals across a network of 270 different bars and retail outlets statewide.

In its 2016 earnings report, Penn National noted that it did a couple of tuck-in acquisitions with its video gaming terminal business.

Penn National has not disclosed the terms of the acquisitions.

“The multiple is something that we have not provided in the past,” says Jay Snowden, Penn National’s chief operating officer. “I think it’s fair to say that they were accretive transactions. The size was approximately $1.5 million of EBITDA.”

Meanwhile, Delaware North, owner of Jumer’s Casino in Rock Island, in May 2016 bought GEM (Gaming & Entertainment Management) and its 1,800 VGTs at 438 sites in Illinois. Terms of that deal were not disclosed publicly either.

The popular form of distributed gaming began in Nevada in the 1990s, when businesses with names like PT’s Pub, The Loose Caboose and Jackson’s Bar & Grill offered gambling in a non-casino environment.

But its expansion into Illinois and possibly Pennsylvania has been driven by the economic crisis of 2008, after which states looked at widening their gaming offerings as a way to maintain or even increase their tax revenues.

“We are studying this issue with our members to determine the best regulatory structure that would complement existing gaming facilities and ensure responsible gaming measures are in place and enforced,” says Sara Rayme, senior vice president of public affairs at the American Gaming Association.

The Nevada Gaming Control Board defines distributed gaming as a “restricted” market where VGTs, video poker or slot machines are placed in non-casino businesses.

Those businesses also include supermarkets and gas stations.

But with the recession now a fading memory for many Nevada residents, is the distributed gaming market healthy?

“Health is relative,” Sartini says. “In the Southern Nevada market, there has been some consolidation. Up north is where the bulk of the growth has taken place.”

Sartini says there are lots of opportunities in Northern Nevada, especially in Reno.

“They have Tesla fever,” Sartini says of the area, which is now home to a battery factory for the innovative automaker. “The Reno area is growing; employment and wages are also growing.”

Besides Nevada and Illinois, VGTs can be found in Oregon, South Dakota and Montana.

Golden Entertainment has spent $45 million to enter the Montana gaming market, and has become the state’s second-largest provider of gaming machines.

“With their stable economies, we are very bullish on the central and west regions of Montana,” Sartini says. “We are starting to see a little recovery in eastern Montana, which has been sluggish over the last year with the slump in oil prices in the Bakken oil field in North Dakota.”

Sartini attributes the company’s success in Montana to just being a distributed gaming operator, and not a tavern owner.

“I know we just want to be a route operator in Montana,” he says. “We are the outsider up there.”

Montana has a 15 percent tax on video gaming, applied to the money paid into machines minus the payouts. The money collected goes into the general fund.

Sartini expects a lot more states to begin talking about legalizing distributed gaming over the next five to 10 years, as lawmakers look to raise extra revenues.

Overall, Sartini says opportunities in Illinois are “still to be determined,” while if the opportunity presented itself in Pennsylvania, “we would take a look at it.”