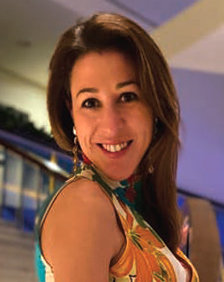 Brianne Doura-Schawohl has a passion for solving the problems of gambling addiction through research and treatment. She addresses the issue as if she’s been studying it for her entire career.

However, Doura-Schawohl, vice president of U.S. policy & strategic development for responsible gambling consultancy EPIC Risk Management, has developed the passion for what she does in the last eight years. Her original passion was government.

After earning a degree in political science and government from the University of Mary Washington in Virginia, she worked with political action committees and a national lobbying group for three years, until landing a position that would take her back to her native Massachusetts in 2013.

That position was as director of policy and communications for the nonprofit Massachusetts Council on Compulsive Gambling, and it was where her political expertise would join with the most important educational experience in her career, as she began learning about problem gambling, gambling addiction, and what is—and is not—available to address the issue.

“When I was in Massachusetts, not only did I carry a portfolio for Massachusetts at the time, but we actually served the Connecticut council as well,” Doura-Schawohl recalls. “So I was doing lobbying and government relations in the two states, and that really helped set the stage for me to have an understanding and appreciation of the challenges of the infrastructure around gambling addiction within the U.S. system.”

Those challenges normally related to a lack of the infrastructure to identify and treat gambling addiction in the U.S. at large, she says. It’s a concern she took to Washington, D.C. in 2018, when she became legislative director for the National Council on Problem Gambling, and when she joined EPIC Risk Management in September 2020.

“Going over to the national council, representing all 50 states and jurisdictions, I saw just how fractured of an issue this is,” she says.

EPIC is a unique consultancy for problem gambling research, in that its founder and CEO, Paul Buck, formed the company eight years ago after he was released from prison for crimes connected to his own gambling addiction. There are many other consultants with what the company calls “lived experience” who join experts like Doura-Schawohl and others to work with governments in 24 countries to help craft responsible gaming and gambling addiction policy.

Doura-Schawohl joined the company just as the Covid-19 crisis was accelerating the growth of online gaming and mobile sports betting. “When there’s greater access (to gambling), as we’ve seen, there’s also an increase of of problems,” she says, “and something that we’ve always faced within the problem gambling sector is that we’re often the very last to get funded and the very first to get cut when it comes to programs.

“And when states were facing increased budget pressures, problem gambling services were experiencing exorbitant cuts to the already underfunded programs.”

At the top of Doura-Schawohl’s priorities for the coming year—a year in which she says she will form her own separate consultancy—is addressing the disparity in the U.S. of programs to identify and treat gambling addiction. “The federal government actually doesn’t recognize gambling addiction,” she notes. “It’s one of the few addictions that it doesn’t address in any substantive way. And I think for the first time ever, the (gaming) industry is really feeling the impact and effects of that.”

It’s one of the reasons there is no national problem gambling helpline, and it’s why officials in different states are not on the same page in addressing gambling addiction.

One way to change the situation is through education, as EPIC did at a November 30 symposium on problem gambling that brought together lobbyists like American Gaming Association CEO Bill Miller, problem gambling professionals and more than 100 C-suite executives from gaming companies and other stakeholders such as sports organizations, “with the objective of having an honest, raw and scripted conversation about what more we need to be doing collectively,” Doura-Schawohl says. “It brought together all the important stakeholders within this ecosystem.”

She says conferences such as this, along with the university research being done in Australia, Canada and elsewhere, are essential in the effort to have government in the U.S. address the problem of gambling addiction. “My most important goal is that the federal government finally recognizes gambling addiction for what it is—a true addiction that deserves the full weight and support of the government,” she says.

“But my priorities also include ensuring that all of the emerging and new markets, as they consider (gambling) legalization and regulation, are making substantive commitments to problem and responsible gambling within their states—that markets that have been already experiencing this expansion may examine what they’ve done right and wrong, and we can work together to address some of those struggles and issues.

“It’s about being that thought leader in this space and bringing those that really haven’t given good consideration to this topic to the table, to show the value that we can have if we work together to address this.”