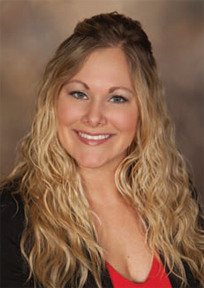 Tonya Roedell grew up in Mooreland, Oklahoma, a farm town of 1,200. She ended up in the teeming metropolis of Las Vegas, first with Caesars Entertainment and now with Aristocrat Technologies, where she serves as director of strategic initiatives.

“I had to stop believing how others defined me,” she says. “I’m not too young, it isn’t a man’s job, growing up in a small town won’t hold me back, and I refuse to fail. I learned to be curious, persistent and resilient.”

The journey began when Roedell graduated from Northwestern Oklahoma State University with a degree in eCommerce in 2002. Then she visited Las Vegas for the Comdex trade show.

“I knew that marketing in the gaming industry was the place to be,” she says.

In 2003, Caesars Entertainment hired Roedell as an internet marketing specialist, managing the Eastern region. The company promoted her to internet marketing manager, responsible for all properties and the Total Rewards program from an interactive perspective. After eight years, Roedell moved to Aristocrat, which created a position to utilize her operations knowledge.

“The experience with Caesars was instrumental to my success with Aristocrat,” Roedell says. “I gained the ground knowledge needed to understand the gaming industry and worked with world-class marketers. I understood how loyalty is created and how to drive revenue to all sectors, including non-gaming.”

“Working with all levels of operations, from VPs to end users, gaming floors to F&B, I make system conversions as painless as possible,” she says. “My team and I build deeper loyalty with our customers through increasing product usage and ROI.”

Success did not come without Roedell facing her fears.

“Life won’t always go the way you want it to, but when it comes down to it, we all have the same number of hours in the day. I learned to make my time count. Instead of complaining about the way things could/should have been, I focus on everything I’m grateful for.”

Roedell has benefited from a variety of mentors.

“Global Gaming Women has played a major role in my ability to network and to find like-minded individuals that have (guided) my development and success,” she explains.

Along the way, Roedell’s mentors have become good friends and provided honest input in a constructive way. They’ve assisted in big decisions from changing companies to navigating day-to-day situations.

Former Caesars leader Katrina Lane encouraged Roedell to apply for a management position at the company. As vice president, Lane ensured that she had a seat at the table with decision-makers and provided strategies to have Roedell’s voice heard. Lane moved on to become an executive at American Express, but continues mentoring her.

As for the future, Roedell sees digital technology as pivotal. “Mobile phones will continue to play a major role in our lives personally and professionally. Sports betting approvals are only the beginning to what will soon come,” she says.

The future is also open to new ideas and new talent, says Roedell, who likes to relax at the beach or in the mountains, often surrounded with music.

“Network, keep options open and never burn a bridge,” she advises. “It’s a small industry, and everyone is connected in some way. Invest in yourself, understand your strengths and weaknesses, and don’t forget to have fun; the gaming industry is in the business of fun.”