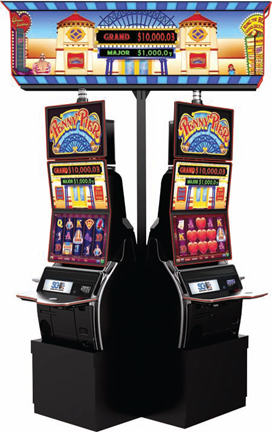 This double-progressive series of video slots on Scientific Games’ TwinStar Matrix core cabinet celebrates boardwalk-style carnivals such as one may have seen in Atlantic City or other Eastern shore towns at the turn of the 20th century.

The base game is a five-reel video slot available in configurations of five, 25 or 50 paylines. There are two initial base games, called “Step Right Up” and “Pete the Sweet.” Both have the same two main bonus features.

The “Drop N Slide” feature can lead to one of the four displayed prizes—in the penny version, static prizes of $10 (“Mini”) and $50 (“Minor”), and the two progressive jackpots, resetting at $1,000 (“Major”) and $10,000 (“Grand”), the top prize. Three, four or five scattered “Slide” symbols trigger the event with three, four or five games, respectively, on a five-by-five prize board filled with bronze, silver or gold coins.

Each coin will display a prize of either Mini, Minor, Major or a bonus up to 250 times the total bet. For each game, up to three coins will be dropped to land either in a tube or in a spot marked “RING ME.” If the coin lands in the RING ME slot, the award will either be the Minor, the Grand or “Drop the Lot.” The

three, four or five scattered Slide symbols trigger the Drop n Slide with three, four or five games respectively. A five-by-five prize board will be filled with bronze, silver, or gold coins. Each coin will display Mini, Minor, Major, or up to 250X total bet. For each game, up to three coins will be dropped and land in a tube or RING ME. If a coin lands in RING ME, then

four to six coins, the Minor, the Grand or “Drop the Lot” will be awarded.

If Drop the Lot is awarded, then coins will land in tubes until all tubes have five coins. Once all coins have landed in tubes, the “Slide Feature” starts. A platform slides back and adds the bottom row of coins in the tubes above the top of the corresponding columns of the prize board. Then the platform pushes the added coins onto the top row of the prize board, moving every coin in a column with an added coin down one position on the prize board. The feature is repeated until there are no more coins remaining in tubes.