Novomatic Americas beefs up its R&D talent to grow its U.S. footprint on several fronts 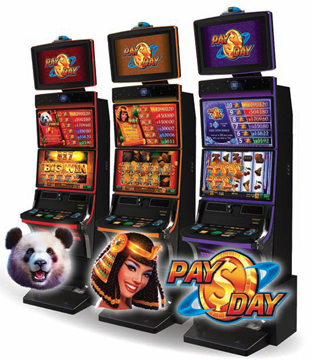 It’s been four years since Novomatic Americas, the North American subsidiary of Austrian slot leader Novomatic AG, hired Matt Ward as vice president of product development. It was one of a series of smart moves that would allow Novomatic Americas to quickly mature as a supplier to U.S. casinos.

Ward, who had spent 15 years in game design at WMS Gaming, has built up Novomatic’s U.S. game design studio in the Chicago suburbs, its staff—now at 20—providing the U.S.-centered game design that would be vital to Novomatic’s growing North American footprint.

The strengthened team at Novomatic Americas has moved the company forward on several fronts, from major hit casino games to a growing dominance in the Illinois VGT market.

Novomatic Americas has increased its output of premium and core slots, as well as hardware and systems for VGT markets in Illinois, Pennsylvania and elsewhere.

On the slot side, Novomatic’s superior hardware has given Ward a lot to work with, from several iterations of the V.I.P. Lounge to the Panthera 1.43 Curve, the V.I.P. Lounge Curve 1.43, and the immersive Novostar V.I.P. Royal 3.65 cabinet with Python Chair.

On the content side, it’s been all about premium progressives like the mega-hit Thunder Cash, a four-level progressive with two popular bonus events, including a “Coin Respin” lock-and-spin feature.

“We have almost 200 units in the market, and a high demand for this product. They’re doing well everywhere they are placed,” says McLaughlin. “They continue to trend upward in almost every single location we have them.”

This year, Novomatic Americas arrives at Global Gaming Expo with premium progressive links in several different game styles. “These are not IP titles,” says Ward, “but high-end progressive links that have a lot of focus on strong Asian titles. We’re also looking at bringing some classic fruit-style games to the progressive market, going after that core player and giving them the excitement of a lock-and-spin bonus on a linked progressive.”

At the top of that list is Money Party, with launch games Fruity Fruity and Juicy Juicy. The games are both five-reel, 50-line four-level progressive slots on the Panthera 1.43 Curve cabinet (available also on the V.I.P Lounge Curve 1.43), and both base games are loaded with fruit symbols.

The main Money Party Feature is a lock-and-spin feature in which coins labeled with prizes hold in place for three spins, and reset back to three spins with any additional coin symbols. Filling the entire screen with coin symbols returns double the accumulated coin value.

There are two symbol-based progressives, resetting at $500 and $15,000, plus two fixed jackpots.

“There’s definitely a player base that is underserved by the fruit games,” says Ward. “Giving them an updated version of the fruit-style game with the lock-and-spin bonus added on will make them really appealing.”

Another new progressive entry is an addition to the Pay Day link, which features a ladder-style lineup of eight progressive jackpots won by landing scattered Pay Day symbols—ranging from a fixed prize of $30 for five symbols to the top progressive jackpot resetting at $12,000 for 10 symbols. The first two games in the series, Prize Panda and Prize of the Nile, feature up to 20 free spins with all non-progressive jackpots tripled.

The new entry in the series, called Pay Day Plus, improves on that feature. “Pay Day Plus takes it a step beyond,” says Ward. “Instead of 3X in the free spins, it awards 2X, 3X or 5X, creating a chance for some very significant prizes. Also, we lowered the line count from 30 to 20; we’re looking at this as a high-denomination version of the Pay Day game.

“This is a North American-designed game,” says McLaughlin, “different than our European style of game from the art to the math. We’ve had a lot of interest from operators in Prize Panda and Prize of the Nile, the first games have gone into Grand Casino Hinkley, and operators will be super-interested in Pay Day Plus to follow up in the series.”

Another standout progressive link is Samurai Beauty, also a four-level progressive with a lock-and-spin feature, this one on the V.I.P. Lounge 1.43 Curve cabinet. Like Pay Day, the game also features a free-spin bonus and mystery expanding wilds.

“The artwork on this game is fantastic,” says McLaughlin. “It centers on the main character, a beautiful Samurai warrior. She’s an expanding wild symbol on an any-ways five-by-three array. Six coins trigger the lock-and-spin bonus.”

She says there will be real-life Samurai beauties at Novomatic’s G2E booth to guide attendees to the game. (Naturally.)

“Progressives are definitely hot and getting hotter in all regions and subcategories,” says Ward. “Our progressives also span the range in the level of the top progressive. Some casinos and players are looking for the $25,000 high end, while other casinos want to limit their liability to a lower $5,000 grand progressive. We’re trying to meet those demands.”

“Novomatic has not been progressive-focused in the European part of their business,” says McLaughlin. “The demand in the U.S. markets have dragged them forward into that genre. We’ve worked on that product category the last two years, and we have now gone all-in, becoming a competitive progressive product line provider.”

That extends to Novomatic Americas’ core video slots as well as the premium games. One of the big standouts there is Dragon Hits, in the Novo Line on three different cabinets—Panthera 1.43, V.I.P. Lounge Curve and V.I.P. Royal.

“This is just something I haven’t seen before,” says McLaughlin. “The way you proceed through the progressives is unique.”

Dragon Hits features a three-level, must-hit-by progressive. The Fire Dragon, Gold Dragon and Jade Dragon are each free-game trigger symbols, leading to anywhere from five to 25 free games, depending on the symbol and how many of them land. But each symbol also corresponds to one of the progressives, which are mystery must-hit-by prizes that are awarded at random during the free-game events corresponding to the jackpots.

“When you’re in those spins, you’re eligible for that mystery must-hit progressive,” says Ward. “In those free spins, every spin will have a certain number of random scattered wilds on the reels.”

In this and other core game entries, Ward’s team is working to produce superior math models. “We’re taking some of the established math models and really amping up the excitement level,” he says, “trying to focus on what the real core thing is that players are looking for with this math model, and making that the main focus of the game.”

Among the more intriguing among Novomatic’s new core games is Riches Ahoy. “This was huge in the U.K. route market,” Ward says, “and we brought it over to the Illinois route market, where it quickly became one of our top performers. And now, we’re bringing it to the casino market. It’s a very different style game, called a ‘bar-X-O game’ in the route market world.”

That means it features a very limited symbol set of bars, 7s, Xs, Os and a wild symbol. “The O symbol is a blocker,” Ward explains. “By itself, it does not pay, but the bonus trigger symbol can occasionally drop down over it. And if you get five bonus symbols, you get free spins or a picking game for a progressive.

“This is very much a player’s game, a very clean game that offers a really different, fast-playing experience.”

According to McLaughlin, while Novomatic Americas is still growing in the casino slot market, most of the company’s growth over the past few years has been in the VGT market in Illinois. “We have become the No. 1 and No. 2 performers in those gaming cafes,” she says. “And with the expansion in Illinois to the sixth game (per venue), we’ve been the preferred provider of that sixth game.

“Based upon performance and upon how we’ve started to impact in those different locations, we’re getting replacement orders and new orders for the expansion. And in Pennsylvania, because of our work in Illinois and our success there, it has been more of a pull than a push with customers in that market.”

Along with the recent growth in game sales has come a new push to provide peripherals for the VGT market in the form of a player reward system and player kiosks.

“We’re producing a VGT player reward system specific to the Illinois market, where you can’t use player tracking,” McLaughlin says. “We’ve developed a custom system, and we’ve had great response to it. We’re now going to start installing with three different very large operators in the Illinois market, and we’re expanding that into Pennsylvania.”

It will be the second home run this year in the kiosk business for Novomatic Americas. In April, the company launched the Novamatic ACTIONBOOK sports betting kiosk, an integrated self-service kiosk that presents betting options and wager features in an easy-to-learn style. Dual interactive touch screens allow players to place individual bets, parlays and a variety of new bet options while providing familiarity and intuitive control.

“We have a great relationship with Kambi, who are the major distributor for Penn National Gaming, and we are their kiosk provider, which is huge for us,” McLaughlin says. “And we continue to get those types of conversations and deals with major companies in the sports betting segment.”

Also on the hardware side is a video wall the company rolled out at ICE London that combines seven 4K video panels that run integrated animation behind games, synchronized with game events, running attract animation when the games are idle.

It all demonstrates the diversity of the product library being built by Novomatic Americas, which recently expanded into the Puerto Rico market and continues to grow in Native American markets like Oklahoma.

Novomatic may be the king of Europe, but the company is rapidly becoming a force on the other side of the Atlantic as well.