Re-imagining the non-gaming assets and amenities casinos already have 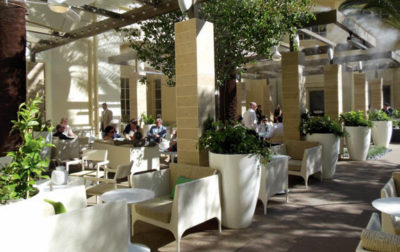 In the past 15 years, as U.S. gaming markets got more crowded, operators invested in non-gaming attractions to draw more customers, draw younger customers, fend off competition and, of course, give guests an all-around resort experience. The acceleration is reflected in the parlance—what once were casinos became casino hotels, which became casino resorts, and finally, resort destinations or even integrated resorts, terms that skirt right past the gaming element.

Nevada is the oft-cited example. Research from the Center for Gaming Research at the University of Nevada, Las Vegas showed that in 2018, the average Las Vegas visitor spent $435 per trip, of which $285 went to non-gaming attractions, and just $150 to gambling. In super-regional destinations like Las Vegas and Macau, operators have outdone each other with lavish pools and spas, high-end nightclubs, virtual-reality amusements, pricey entertainment packages—the works.

But those types of amenities are supported by a leisure class with ample discretionary income—something that may be in short supply right now, and for the foreseeable future.

The rationale behind non-gaming additions remains sound, according to David Nejelski, creative director and principal at St. Louis, Missouri-based TBE Architects. “It’s still pretty much universal that our slot player is a baby-boom woman of above-average income; that’s who casinos have to take care of during the day, but after that, (non-gaming) amenities give other people a reason to come.”

They’re not all high-end, status-for-sale amenities, either. Some remote gaming halls seize the opportunity to become all-purpose entertainment districts, says Nejelski, “with a bowling alley, a cineplex, restaurants, gaming, a sportsbook or sports bar, a hotel and pool, a golf course.”

But when the going gets tough, the occasional guest matters less than the core customer—the gambler. In these challenging times, Nejelski contends, it’s time to get back to basics.

According to the annual American Gaming Association State of the States report issued in June, in 2019 commercial casinos in the U.S. racked up a record-breaking $43.6 billion, a 4 percent year-on-year increase, and the fifth year of consecutive growth. The future looked golden.

Within 10 weeks, the whole thing collapsed due to a virus that first shut down casinos in Macau last winter. By mid-March, virtually every commercial casino in the U.S. had closed, followed by most tribal facilities, and the world went on lockdown. 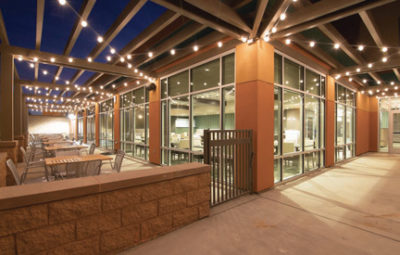 Outdoor dining at the new Havasu Landing Resort & Casino, which opened at Lake Havasu, California in 2019

Most of those casinos have since reopened, but in many cases, at first gaming was pretty much all they offered. In Atlantic City, for example, which began to reopen on July 2, casino patrons initially couldn’t dine or even order a drink inside a casino. So all those fancy extras—the pools, the concert halls, the spas, much of the F&B—counted for nothing in terms of revenue.

“We’ve been in touch with every client we’ve worked with for the last 20 years, and with 50 percent to 60 percent of gaming seats open, they’ve found that that their quintessential gamer is not the casual gamer,” says Nejelski. The focus now is “primary operations.” In other words, gaming is still king—the foundation on which all else rests.

With new safeguards including social distancing, a lot of those amenities are compromised anyway. Buffets are out for the foreseeable future, along with other close-quartered amenities.

In TBE’s markets in particular—primarily consisting of regional and locals casinos, including tribal operations—“we haven’t seen a reduction in gaming to accommodate more amenities—we actually have seen the inverse,” says Nejelski. “It’s particularly important nowadays, with the shutdowns and the reopenings. Because the core gamer, the core customer base is coming back first.”

A whole new world? Undoubtedly. Here are seven tips on non-gaming that make sense now, and could become standard applications in the resort of the future.

Take it outside. “Instead of looking at brand-new amenities or the latest gimmick, we’re looking at ways to reimagine the assets and amenities casinos already have, in a new and better way,” says Nejelski. That includes outdoor dining, outdoor fitness centers—“everything that can go outside,” all of which can be marketed as healthy options in a safety-conscious age.

It works for gaming, too. TBE designed its first “gaming patio” in 1999, at a casino in Southern California, to take advantage of continuous balmy weather, and Nejelski expects that such al fresco options could be the next big thing. “In an Ohio gaming property, we did outdoor gaming patios because people couldn’t smoke inside,” he says. “We heated the slabs, heated under the machines to keep them warm, and used radiant heat panels. You could go out on a day when it was 25 degrees outside, and it was actually pleasant.”

Waste not, want not. One thing Nejelski abhors in any resort is the unused space—any square footage that doesn’t pull its weight in proportion to the capital investment.

“A lot of things come back to a basic philosophy of cross-use. We don’t want any dark spaces, and a highly appointed spa with all the bells and whistles is not going to be utilized fully for all the resources that are devoted to it. You want a more lean, mean, efficient approach. You can still provide those services, while making sure they’re not wasteful. You just have make adjustments to maximize the cross-usability, tailoring it to the local market and the local demographic.”

Pare back the pampering. And speaking of spas… Before 2008, they were “all the rage,” and operators willingly invested in 20,000-square-foot pampering palaces to draw discerning patrons, says Nejelski. The ingredients have changed a lot since then, and could be pared down even more in the no-touch era.

“You may have a dry spa where you can get a massage and mani-pedis, but instead of a full hairdresser you may just have an updo station, somewhere patrons can get their hair styled,” he suggests. “We’ve discovered through research, marketing studies and working with clients that women in particular don’t want anyone to cut or color their hair except ‘their person.’”

Make trends outperform. Before the pandemic, there was a growing movement toward so-called “wellness suites.” MGM Resorts was a pioneer of the idea in 2012, when it introduced its Stay Well rooms, complete with air purification systems, aromatherapy, shower heads dispensing vitamin C, “dawn simulation” clocks and healthy menu options designed by the Cleveland Wellness Clinic. But those exclusive suites can do double duty if they’re not dedicated for one purpose alone.

“One of the things we’re working on and implementing is the use of all-organic mattress materials in all hotel rooms,” with organic cotton sheets, says Nejelski. A guest who wants the full treatment will pay extra for the added accoutrements: mini bars stocked with juices, bowls of organic nuts and fresh fruits instead of candy, and spa-quality lotions and potions. Otherwise, the wellness suite is simply a well-appointed hotel room.

Pet rooms with hard-surface floors and easy-clean finishes are also big, because they allow the loyal high-roller customer to bring along little Fido or Fluffy. “This flexibility allows you to calibrate and tailor the guest experience and guest services to create the best relationship with your best customers.”

Play to your audience. There’s a saying that all politics are local, and the same is true of hospitality. Non-gaming attractions such as golf courses are “a little bit market-based and generally they’re low ROI, but in some places, like Scottsdale, Arizona, they’re a great amenity, fitting right in with that market and that demographic,” says Nejelski.

And remember, integrated resort or not, many adults want their casino to be a grown-up retreat, not Disney World with slots. “There was a period when introduction of a Kids’ Quest education center, an entertainment/day care facility, tried to make casinos more family-friendly,” said Nejelski. “We’ve seen those go away or be really reduced in their impact; they’re not as grand, ambitious and over-the-top as they used to be. They also started to set up an odd dynamic, encouraging families to bring to kids to a casino. We haven’t done one for years.”

Go for surefire investments. OK, there may be no such thing given the current economic crisis, but in terms of customer convenience and ROI, “the ones we see enduring are additions of hotel rooms, parking and parking structures and quick-serve food options so people can grab a bite to eat,” Nejelski says.

Historically, covered parking garages, of all unsexy amenities, have been known to generate ROI of 49 percent and even more. They make inclement weather a non-issue. Pay-on-foot and credit card technologies keep costs to a minimum.

Remember your “why.” “Above all, don’t get too focused on the next new gimmick and add amenities that are out of balance with your core gaming business,” says Nejelski. “You want to make sure you’re maximizing that guest experience, the guest arrival and the time on property.

“Amenities are not just a lure to get them to stay. It’s also making that stay more enjoyable and more comfortable, which extends play time.”

In sum, narrowly programmed amenities and one-fit, one-use spaces are going by the wayside in favor of those that are more flexible, more changeable, and more accommodating to different needs, Nejelski says.

As for the future, “the optimistic way to look at it is that sometimes external forces are a catalyst for change. The gaming industry and the product that comes out at the back end may be an improvement. We prefer to think of this moment as an opportunity.” 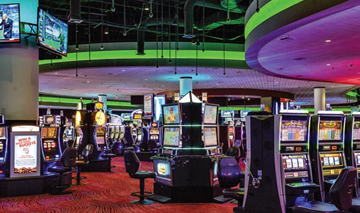 A four-seat slot carousel at Miami Valley Gaming, a racino near Lebanon, Ohio

In years past, it was common practice for casino operators to pack as many slot machines on the gaming floor as possible, in congested rows. But even prior to Covid-19, the industry had started moving toward a more open, inviting player experience. Long rows of machines were replaced with smaller carousel-shaped banks of three, four or five machines, which left more space between machines and more walking space between carousels.

From a geometric view, in the past, each machine (including the cabinet and guest’s seating space) was expected to fit in roughly a 3-foot-by-6-foot rectangle—not exactly a lot of room to kick back and relax while playing Wheel of Fortune. By figuring in an additional 12 inches to the left and right, plus an additional 12 inches behind the guest seat (upping the machine space to 35 square feet), it creates a greater feeling of openness that allows guests to relax more.

It’s like getting that coveted airplane upgrade from coach to first-class. As everyone knows, relaxed guests are happy guests, and happy guests tend to play longer.