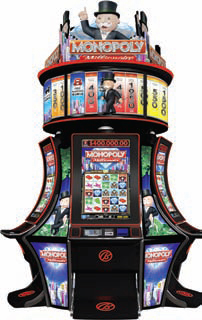 The latest game in Scientific Games’ prolific Monopoly series represents one of the best combinations of technology and brands from legacy companies Bally and WMS. The longtime WMS title here resides on the Bally Alpha Pro Wave 360 cabinet, which employs a 360-degree top display for a central bonus event.

As in all games in this series, bonuses are based on the legendary Monopoly board game. The Big Wheel Bonus on the circular top display activates any of five different specific bonus events, one of which can result in the top progressive prize, which is available in a local or wide-area version. The local version resets at 10,000; the wide-area version resets at $400,000.

This bonus lineup is added to mystery events in the five-reel, 40-line base game—featured on a five-by-five array (five rows of symbols). Randomly triggered events include the Community Chest bonus, in which a three Community Chest Bonus Cards appear and the player picks one for a prize ranging from two to 10 times the total bet; mystery symbol positions that are randomly replaced with one of several high-paying symbols; and a Chance symbol, which covers any random position and replaces it with a wild or one of the higher symbols.

Big Wheel Bonus symbols on the corner and center reel spots trigger the main event and activate the 360-degree Monopoly Wheel, which spins to either “Avenue” credit prizes up to 4,000 times the bet or one of four separate events:

Landing on the Railroad Bonus awards 10 Railroad Bonus Free Games. During each free spin, a railroad track displayed on the top display will spin in sync with the reels to award a credit prize up to five times the total bet or a multiplier up to 10X.

Finally, in the Go to Jail Bonus, players roll dice in jail, and if doubles are achieved, a credit prize is awarded. Three tries are granted. The first try awards 75 times the total bet. The second try awards 30 times total bet; the third, 15 times. If no doubles are rolled in three tries, a “Sure Win” prize of five times the bet is awarded.