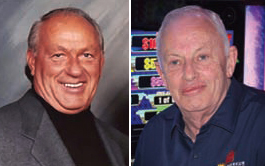 AGEM previously announced the creation of this unique annual awards program to acknowledge the lasting impacts on gaming by Halle and Mead, two distinctive industry veterans who died unexpectedly in 2015. Honorees are announced each year at the Global Gaming Expo in Las Vegas, and this year’s awards ceremony for McMonigle and Orrick took place on Wednesday, October 28 during the G2E Virtual Experience.

Born in St. Louis, Missouri, in 1944, McMonigle died on March 15, 2020 at 75 following a robust life both personally and professionally. He began his business career with Reader’s Digest magazine in New York City and went on to work in marketing and circulation for Rolling Stone and Outside during a career in magazines spanning 1979-1986.

McMonigle then began his legendary career in gaming when he joined International Game Technology, where he spent 17 years and helped lead the company to the top of the list of global slot machine companies. He held many positions at IGT, ultimately executive vice president of corporate relations and North American sales.

McMonigle became widely regarded as the most successful slot salesman in gaming history, with IGT routinely receiving 70 percent market share of new casino openings as the riverboat gaming boom in the early 1990s led to explosive gaming expansion in the U.S. and around the world. McMonigle was also a driving force behind the founding of AGEM in 2000, and served as the organization’s first president through 2005 before moving on to work for a variety of other gaming-supplier companies.

An Englishman born in Dumfries, Scotland, in 1949, Orrick, 71, is a 27-year veteran of the gaming industry and currently serves as director of industry relations for AGEM Gold Member Merkur Gaming, part of Germany’s Gauselmann Group.

Orrick started in the gaming industry in 1993 as editor of Euroslot magazine after a 17-year career as a motorsport journalist, editor, author and publisher. He also served as founder, editor and publisher of Casino International magazine before joining Spanish slot machine manufacturer Recreativos Franco, S.A as international communications manager in 1997.