Convergence has brought the two betting options closer than ever 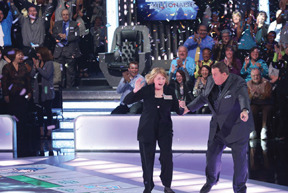 Gaming and lottery kingpins target a multibillion-dollar truth: a gambler is a gambler.

Lucrative slot revenues may originate from the same people playing lottery hardball. As in Powerball, just one entity of the lottery world. It hit an all-time jackpot of $1.5 billion in January during a frenzied promotion across 44 American states.

Perhaps three quarters of the gambling and lottery markets intersect, a fact realized by their ultimate power brokers.

Scientific Games, which introduced the first secure instant lottery ticket 42 years ago and now holds a reservoir of about 40,000 games, pronounced its interest in the gaming-lottery synergy by annexing slot makers WMS in 2013 and Bally Technologies in 2014.

Lottery giant GTECH also recognized the correlation between these two industries by acquiring IGT in 2014 and forming IGT Plc.

Scientific Games and IGT spent about $14 billion to become the world’s gaming-lottery czars.

IGT and Scientific Games offered a compelling first year as industry giants in 2015. They serviced both the reality of technical lottery innovations and the fantasy of instant financial fame. New systems and ideas have sprung from the partnership of two industries. A lottery player can scratch off a ticket and travel all the way to a television appearance in the heart of a gaming capital like Las Vegas.

Perhaps it is true. All you need is a dollar and a dream.

The company that acquired slot-makers Bally Technologies and WMS Gaming literally clicks on all cylinders in the lottery arena.

“What is astounding to most people, as we have integrated into the gaming world, is the size and scale of Scientific Games,” says Jim Kennedy, the group chief executive of lottery for the company—which he joined in 1985 as an innovative young game programmer. “It sort of blows you away. Lottery is a $284 billion global business. There are lotteries in virtually every country, and we are a major supplier to most of the major lotteries in the world.

“What we have found is that there has been a predisposition about who plays the lottery. Lottery players actually outnumber gaming players, which gives you an appreciation as to why this marriage of gaming and lottery is such a natural thing.”

Natural, all over the world. In the U.S. and Canada, for instance, Scientific Games supplies nearly all of the state and provincial lotteries with everything from lottery retail technology and central systems to dynamic game content. Kennedy says Scientific Games brings 3,500 new instant lottery games to market each year across 150 global jurisdictions.

The company has customers on six continents, including some of the world’s most successful lotteries such as Gratta e Vinci (Italy), China Welfare Lottery, La Francais des Jeux (France), Loterie Romande (Switzerland) and Norsk Tipping (Norway), along with the Massachusetts and Georgia lotteries (U.S.). With a million lottery retailers worldwide, Scientific Games is behind about 700,000 consumer touch points, according to Kennedy.

The company has thrived by knowing its lottery customers. Most are government organizations. Although seeking profit like any other business, lotteries have different business models than brick-and-mortar casinos. Their primary mission is to maximize proceeds to their beneficiaries, which range from education to health and welfare, transportation, infrastructure, the environment and general funds.

“Lotteries come to suppliers to create business solutions,” Kennedy indicates. “Governments are under enormous financial pressure today; they are much more regulatory-centric. Scientific Games helps them in many ways. For example, we build player loyalty programs. Lotteries benefit from our deep understanding of consumers due to our extensive research in this area.

“One of the reasons we have been so successful is that we have an enormous amount of patience,” Kennedy laughs. “You really have to focus on lotteries’ needs over the long haul. For these organizations, the security and integrity of the operation is the most important thing. Is the lottery safe? Is it fair? We understand these public officials have complicated jobs. They are dealing with profit and loss on one hand and their political ecosystem on the other.”

Scientific Games’ deep content reservoir may be more significant to a lottery than a casino, he indicates. A brick-and-mortar operator may stick with a few guaranteed winning products. Lotteries always seek something new: Sizzle.

Consumers have multiple options. They can be content to scratch off lottery instant game tickets obtained at their favorite retail store, or they can extend the experience online at home or onto their mobile devices. They can scan a code with their mobile, perhaps spin a wheel in an online second-chance game, obtain a multiplier, and gain a chance to get in on a growing jackpot. Consumers interact with the lottery’s brand in several ways, at their choosing.

Instant games continue to thrive, steadily, Kennedy says. Lotteries know the product must be secure and have a certain look, feel and sense of entertainment. One of Scientific Games’ nine global instant game manufacturing technologies (more than any other lottery provider), Alpha P-7, is the company’s most advanced new technology for instant lottery games. It utilizes a wide range of flexibility in game design elements such as color, images and ticket sizes. The company is the largest manufacturer of lottery instant games in the world.

“Lotteries are launching 50 to 70 instant games a year,” Kennedy asserts. “The consumer loves the excitement and accessibility of the games. Lottery is easy to get to. It becomes part of your everyday life. You can access the games at the local grocery or convenience store. Lottery creates an excitement and expectation in people: ‘I want a chance to win $1 million instantly. I want to multiply my points 10 times. Or I want to be on that TV game show.’”

“It’s a unique product in our industry,” Kennedy says. “The show is taped on the Las Vegas Strip with a studio audience of lottery players from around the country who entered the online component of the lottery game, and they each bring a guest. The game contestants are randomly chosen from the studio audience, and as they move around this larger-than-life, LED-lit Monopoly game board, they share winnings with those sitting in their section of the audience. It’s exciting, it’s intense, it’s high-tech. The experience is everything you can imagine in a game show created for today’s consumer.”

The lottery component has long been strong, particularly in Europe and in Canada. Its footprint hits several areas. IGT sports a plethora of new retail solutions under its central system and applications banner.

Aurora builds on the success of IGT’s Enterprise Series system, which the company lauds as the most prevalent central system and back-office application solution for lotteries in the world, to address rapidly changing market conditions. The Aurora suite of smart, open solutions was designed to define the environment for lottery growth in terms of a technological platform.

The lineup includes Aurora Retail Manager, which enables lotteries to efficiently coordinate, control and monitor the entire life cycle of their retailers. It brings independent and chain-store retailers online quickly.

Aurora Smart Count is a specialized application that utilizes an extended-reach or cordless barcode reader. Retailers scan the first ticket barcode when loading a dispenser, and then scan the next ticket available for sale at shift change or at end of day to create an automatic record of all tickets sold.

From the game side, consider IGT’s instant tickets innovation realm.

IGT’s Head2Head games capture the most important aspect of modern-day gaming—social interaction—and deliver it to players as an instant game. Head2Head games feature two games on a single instant ticket. Players can play simultaneously or by passing the ticket back and forth. Head2Head games allow players to choose from bingo, board games and online games, and to grow sales by incorporating new types of products that may not be offered in traditional lottery locations and social games that engage multiple players and attract larger audiences. It also incorporates the “Pass N’ Play” feature into an instant ticket.

The Clients Weigh In

Throughout the world, each jurisdiction chooses its own lottery-gaming pathway.

The Cash Lotto game in Illinois was updated with new portfolio positioning, accompanied by a refreshed add-on and matrix change, which led to a 25 percent rise on this very successful game, IGT quotes company officials as saying.

Michigan, Missouri and North Carolina lotteries have all seen substantial revenue spikes from numbers games with the introduction of the innovative 1-Off game offering, IGT officials say.

In Oregon, lottery proceeds are the second-highest source of revenue behind state income tax collections. This has propelled a multi-year systems upgrade for a lottery that routinely produces about half a billion annually in state revenues. The upgrade is designed to maintain video lottery revenue by replacing obsolete technologies with next-generation products.

Bill Hanson, director of the Washington Lottery, savors its connection with both IGT and Scientific Games. The lottery obtains scratch cards from Scientific Games and vending machines from IGT. The partnership, in his view, is an instant winner.

“They are both great vendors and terrific partners for us,” Hanson says. “I could not be more happy with the situation. This is a public-private partnership to some degree. They both do an excellent job. Vendors are a big part of how we do business.”

Washington is not one of the largest American lottery states, but still contributed more than $140 million to fund education, retailers, development and even problem gambling last year. This state also takes the gaming-lottery connection into a new realm because of its community partners. Tribal casinos, the gaming arm of the state, have evolved into embracing the lottery. Players can hit both of these markets easily.

The laws of sovereignty, economics and gaming have come together.

“Early on, the tribes did see the lottery as competition for their gaming operations,” Hanson says. “There was always a bit of a rub regarding that during legislative sessions. Tribes are independent nations, which means that if they are receptive to doing business with us, they present us with a resolution that allows us to go on their reservation and enforce our lottery state laws.

In recent years, promotions include patrons entering a non-winning lottery ticket into a drawing enabling them to participate in an evening of poker or a Texas hold ‘em-type tournament at Little Creek Casino in Shelton. Some members of the Seattle Mariners participated, bringing high-profile professional baseball into the mix. Northern Quest Casino in Spokane enabled the same type of promotion for a slot tournament.

Some of what drives the lottery looms right up gaming’s alley.

“People want instant gratification,” Hanson says. “The scratch-off game provides them with that. The holidays usually work very well for us. In one week before Christmas last year, we had sales of more than $13 million overall in lottery products. Those scratch-offs are great stocking stuffers.

“The scratch-off business keeps going up and up. This has been the opposite of what’s happened in the draw business, in which you would buy a Powerball or lottery ticket, say, on Thursday, for a Saturday night draw. Powerball and Mega Millions are suffering from what we call jackpot fatigue. People are not buying the tickets until the prize gets in the $300 million-$400 million range. I don’t understand that one—I mean, how much money do people need?” he laughs.

Wherever one travels, operational jurisdictions are interesting to observe. Some will adhere to current revenue pressure and avoid the temptation to invest in technology. Some will take the plunge. But all, in some form or another, win.

The gaming-lottery leaders see to that.